Tom O'Toole
Bobby Jindal: the next St. Thomas More or another "stupid party-er"?

February 26, 2013
When Bobby Jindal, Louisiana governor and recently elected leader of the Republican Governor's Association, recently reiterated that, "We must stop being the stupid party," many in the party took notice. "We must reject the notion that demography is destiny, stop insulting the intelligence of voters...and accept that government number crunching – even conservative number crunching – is not the answer to our nation's problems." Instead of being the "party of austerity"; the "53 percent," Jindal urged the Republicans to be the party of "conservative compassion," stating, "The first step in getting the voters to like you is to demonstrate that you like them." But as populist as that speech sounds, did the "unapologetic pro-life Republican," and potential Catholic 2016 presidential candidate go too far by writing that "everyone who wants contraception should be able to purchase it," and become another "Stupid Party" candidate himself? 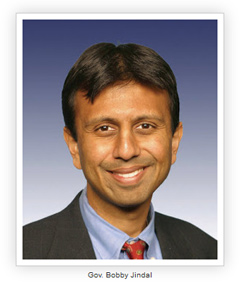 While many are praising Jindal's call for returning the Republican party from a party obsessed with money to a party concerned with morals, many Catholics say Jindal's solution to the HHS mandate, to make contraception available over the counter, is both simplistic and morally defective. The only rationale for requiring women to obtain a prescription for a drug that "research says is safe," the governor asserted, is that "big government" says they should and that large pharmaceutical companies benefit from the status quo.

"It's time to put purchasing power back in the hands of consumers – not employers, not pharmaceutical companies and not bureaucrats in Washington," said Jindal, who also chided his Republican party for being "stupid to let the Democrats demagogue the contraceptives issue."

Although Jindal's radical idea seems to solve both the problem of big government controlling birth control and Catholic institutions being forced to free provide contraceptives – a law in violation of the central tenants of Catholicism – in one swell swoop, many orthodox Catholic leaders aren't so sure.

"Gov. Jindal is taking a political position on this issue and perhaps does not fully understand Catholic Church teachings on this matter," said Ana Toujas, communications director for Catholic Charities of the Archdiocese of New Orleans, while Richard Doerflinger, associate director of the U.S. bishops' Secretariat for Pro-Life Activities (after prefacing his comments with the caveat that the Louisiana governor's proposal "may be well intentioned"), not only agreed with Toujas that "he doesn't understand this issue," but added, "If daily contraceptives are made available...over the counter to young people...like candy, this does not solve the moral or policy problems at all [but] makes the worst of it a reality."

Of course, in the absolute sense, these devout Catholics are absolutely right. Since artificial birth control interferes with God's procreative (and, more subtlety, the unitive) aspect of sex between married couples, it, like abortion, is always sinful and thus a faithful Catholic should want it always to be illegal. But by that same logic, a Catholic politician is a contradiction in terms, for not only would a legislator who never compromised on legislation never get laws passed, he would never get elected in the first place. So what's a good Catholic, whether it be a priest, a voter, or a Catholic with political savvy like Jindal, to do?

Frankly, I think one should simply look to the example of Sir Thomas More, the patron saint of politicians, for the answer. When More had a chance to "play it safe" and remain in the most lucrative law practice in the land, or enter the political fray by becoming the top advisor to a brilliant but erratic king, Thomas rejected his alter-ego Hythlodaeus' (from More's classic book Utopia) advice that "kings don't listen to philosophers" and chose the latter, if tougher, vocation. Furthermore, More went further in his convictions in his biography The Life of John Picus. In this book, More shocked his readers by putting the devout but reticent Picus, a deeply religious man with similar scholarly and leadership qualities as More himself, not in heaven but in the depths of the fires of purgatory for withdrawing from the world on his own terms instead of using his gifts to change it.

Like More's writings, Jindal allowed that his ideas "may challenge your assumptions." Still, the charge that his proposal would make it easy for young people to obtain contraceptives, especially to anyone who has worked in the retail liquor store, is nonsense. Increased policing of underage drinking, combined with heavy penalties for retailers selling to minors, has reduced this problem drastically, which translated means that contraceptives might actually become far more difficult for a teen to obtain from her chain drug store than they now are from the local Planned Parenthood. As for the other major objection, put forth by Father Tadeusz Pacholczyk, director of education for the National Catholic Bioethics Center, that Jindal's proposal "sounds...clever [but] is actually [morally] defective" because Jindal "does not acknowledge the safety issues and health issues associated with the pill," I'm guessing Jindal is more in agreement with Pacholczyk's thought than the good priest thinks. By taking contraceptives out from behind the democratic doctor's door and putting them right near the counter, the governor puts them in a place where a new moral director of the Food and Drug Administration (that President Jindal would no doubt appoint) could thoroughly test them. And, unburdened by the expectations of a pro-choice administration, I'm guessing that his findings would net few (if any) safe contraceptives legally left to sell.

After his recent "stupid party" statement, Jindal added that anyone who wanted to run for president in 2016 "needs his head examined," and More literally proved this true by accepting the Chancellorship of England in 1529, and then losing his head over the job several years later. More knew that lawlessness and bloodshed (a bloodshed that would most likely involve himself) would soon overtake England as it had in Luther's Germany if his controversial but courageous reforms of Church and state weren't implemented, but it was a chance he willingly took. Even so, if only a few more moral men and women had stuck with him and stood up to the tyranny of Henry VIII, history could have been different. Jindal may not be of More's stature yet, but whereas history (whether it be More in England or Lincoln in America) shows that power makes a humble man more holy, it also demonstrates that it makes a god-less soul even more corrupt, and as hard as it is to believe, the successor to "King Obama I" may be worse than the "First." In other words, it will indeed be a sad day if Obama succeeds in getting rid of our guns. But unless someone like Jindal is elected, we will suffer a far worse fate when (just as in More's day) Obama's hand-picked successor outlaws our religion.