In order for such evil to be concealed and tolerated, it is necessary that the right people hold key positions, and that not only a homolobby, but a homoclique or a homomafia is created. – Fr Dariusz, from his report "With the Pope against Homoheresy"

It can hardly be denied now...in light of this [report] that one of the big struggles the pope has had to deal with has been the issue of disobedient and uncooperative bishops and even cardinals who are either homosexual themselves or involved in a cover-up of the homosexual network or at the bare minimum covering up sex abuse cases. This whole mess is almost beyond belief...until you understand the degree of infiltration and effectiveness of this network of homosexual prelates and clergy...reaching into the Vatican itself. – Michael Voris, from his Feb. 25 broadcast of "The Vortex" 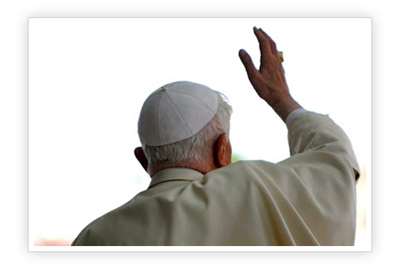 Back in the spring of 2009, I wrote a series of pointed blogs warning about the many potential evils of allowing our "Culture of Death" president, Barack Obama, to not only speak but be honored at the University of Notre Dame Commencement, first appealing to ND president, Fr. John Jenkins, then to the local bishop, and finally to Pope Benedict himself. "Surely the pope will intervene into this righteous cause," I told myself, but my pleas went unheeded. And as predicted, the evil did come, first with Obama being re-elected by dazzled but ill-informed Catholics, and then by Obama stabbing the Church in the back by making certain Catholic practices illegal with his HHS mandate.

Still, as important as my quest to stop Obama was, in hindsight I realize that it was but one of hundreds, maybe thousands, of requests the aging pope received at that time, begging him to personally intervene in everything from the heresy high jinks of a so-called Catholic campus to yet another manifestation of the clerical sex abuse scandal. Certainly the inability to stop (all of) these scandals weighed upon him until, faced with what could be the mother of all scandals, the holy but now half-blind, hearing-impaired, and barely able to walk pontiff had had enough. With the help of the Holy Spirit and the Mother of God, Benedict took the nearly unprecedented step of resigning the papacy. For he knew, if what Dariusz and Voris were saying was true, that even a saintly pope half Benedict's age would have his work cut out for him cutting out this cancer from Christ's one holy, catholic and apostolic Church.

But first, back to Pope Ben – I mean, Pope Emeritus Benedict. When I first heard the resignation news, I, like many orthodox believers, had a bit of the "orthodox Catholic blues." I was used to the pope dying with his boots on, not "taking the easy way" out. I remember explaining to various non-Catholics (many of whom believed that any old or ill pastor should just retire) that John Paul's example of public suffering toward the end of his pontificate was just as important of a spiritual lesson to his flock as his early joyful globetrotting was at the beginning of his papacy. So what has changed? Perhaps it is simply that, despite JPII's best efforts, the "smoke of Satan" that an aged Paul VI warned had begun to infiltrate the Church was now roaring like a wildfire. Considering some of the papacy's worst case senarios (Alexander VI anyone?) staying on – even at the point of hanging on – would have been the safe bet for Benedict. But drastic times call for drastic measures, and this was the gutsy chance to heal the Church he knew he had to take.

To be sure, the gentle Benedict went down swinging, securing the resignation of the now admitted homosexual cardinal of Edinburgh, Keith O'Brien, just in time so that O'Brien couldn't vote in the conclave. But sadly, there seems to be much more muck where that came from, considering that the recent forced resignations of Bishops Patrick Ziemann (1999), Rembert Weakland (2002), Juan Carlos Maccarone (2005), Georg Müller and Raymond John Lahey (2009), Roger Vangheluw, John C. Favalora, John MaGee and Anthony J. O'Connell (2010) – to name a few – came only after lengthy, damaging episcopal tenures, while the Gay Mafia protected the double identity of Marcial Marciel, the diabolical bisexual founder of the Legionnaires of Christ, so well that his dozens of dirty deeds of sexual depravity were not discovered until after his death.

Still, even if the number of gay bishops and cardinals reached upwards to five percent, certainly a figure even the cynical think is high on the "homospectrum," I believe Voris is correct in suggesting that the Catholic Gay Mafia could never have done so much damage if the other 95% had outed them quicker. But whether it was due to false compassion, fear of scandal (including blackmail) or simply a lack of courageous faith, few of their fellow straight clergy reported their active homosexual members when they had the chance, allowing the gays' numbers (and number of sins) to multiply. Now the Gay Mafia stands poised to seize the biggest prize of all; the papacy, daring the many status quo cardinals to stop them.

Of these two things you can be sure: both the Holy Spirit and the Gay Mafia know the man they hope to be pope, and their respective choices are not the same. Furthermore, with the unsurity within the clergy, the lay faithful will have to pray like never before to ensure that the College of Cardinals gets the selection right. For with world leaders like Obama now making the once unthinkable and always unnatural – gay marriage – the law, a strong pope may not only be this world's last chance to save the Church hierarchy, but the family as well. Thus, it is only fitting that the family, that is, "the family that prays together," would be the instrument God chooses to save the papacy, at least this time around...

And to think that, just a few weeks ago, you weren't even sure of what your family was going to do for Lent...