Victor Sharpe
Israel: Trust in the Lord, but keep your powder dry

America from sea to shining sea is some 3,000 miles wide. Israel, if President Barack Hussein Obama has his way, will be a mere 9 miles wide. Obama has uttered ill-advised words and added to the confusion that many in the West suffer from when considering the Arab-Israel conflict in general, and the Israel-Palestinian conflict in particular.

In this, they make a justified error because millions of words have been written about the conflict, untold numbers of articles and books published, and a mainstream media that gives any and all incidents front page news. It's no wonder that the uninformed masses consider the topic inexplicable and are reduced to utter confusion. But the reality is that it is quite simple to explain.

This is not a conflict over territory, despite all that you read and hear. It is a conflict between civilizations. It is rooted in the Muslim call for jihad against all infidels and for triumphant Islam to rule over the entire world. Remember when the Muslim shrieks the Arab and Muslim war cry, Allahu Akbar, it is not "God is Great; it is 'Allah is Greater." That is Islamic triumphalism in a nutshell.

Whatever so-called peace agreements are made between a Muslim and non-Muslim state, the fundamental reality for both Christians, Jews, Hindus, Buddhists, and all other beliefs, is that Islam will never accept a non-Muslim state in territory previously conquered by Muslims in the name of Allah.

Thus, for instance, there will never be a true and lasting peace with Israel agreed to by any Muslim state or entity — especially by those Arabs who call themselves Palestinians.

At best, and according to Islamic passages in the Koran and the Hadith, which all Muslims must obey, there can only ever be a truce, a Hudna, agreed to by Muslims with those whom they disparagingly call, infidels.

In the case of the Muslim Arab neighbors of Israel, especially Palestinian Arabs, they will wait until they perceive that the Jewish state is weak and vulnerable. At that time, peace treaty document notwithstanding, and according to the precedent set by Muhammad himself, they will tear up the worthless piece of paper and attack with the intention of an all-out war of genocide.

The Arabs have done this repeatedly against Israel since their war to destroy the re-born State of Israel in 1948. This Arab aggression caused all the misery that has enveloped that part of the world for decades and created both the Arab and Jewish refugee problems.

The stark and moral difference in what became an exchange of populations was that all 850,000 Jews who were driven out of their homes throughout the Arab world primarily found refuge in Israel where they were absorbed and cared for.

The Arabs, a smaller number, needlessly fled their homes at the urgings of the corrupt Arab League. They were unable to return because their leaders, who had promised them a "massacre of Jews like the Crusades," failed to defeat the 650,000 Jewish men, women and children living in Israel at the time.

The Arab League then forced these Arabs to live in squalid camps to be used until today as a propaganda tool against Israel. They have virtually imprisoned these people for over sixty years and indoctrinated them with vile anti-Jewish hatred. All this has been perpetrated with the connivance of a singular United Nations organization called the United Nations Works and Relief Agency (UNWRA). This Arab outrage, aided and abetted by the immoral snake pit that is the United Nations, should be seen as primarily an Arab crime against humanity.

Arab aggression (long before there was any so-called Israeli occupation) led to the 1956 war forced upon Israel by relentless terror attacks from Gaza and from Jordan. It inevitably led to the June, 1967 Six Day War; the 1973 Yom Kippur War; the War of Attrition; the First and Second Lebanon Wars and the two wars against Hamas after relentless Muslim terror attacks upon Israel from Gaza.

And all the while, in between these Arab wars of attempted genocide against the Israeli people came daily terror against Israeli civilians by the Arabs who call themselves Palestinians.

Thus, all talk by misguided Israeli, U.S. and western politicians about promoting the "peace process" or, if you like, "peace in our time" is as illusory as a mirage in the desert. I wish it was not so.

We live in an era where euphemisms beguile uninformed people. We saw in World War 2 that the German Nazi leadership cloaked the Holocaust under that charnel house euphemism, the "Final Solution," which brought the horrors of Auschwitz.

Today we have two other euphemisms, which are heard repeatedly in relation to the Arab and Muslim world's ambition to annihilate Israel. They are repeated like some diabolical mantra. You have all heard them; they are "land for peace" in which Israel is pressured to give away its biblical and ancestral lands but never receives peace.

The other one is "The Two State Solution." This is so beloved of the Left and literally spells for Israel and its 6,000,000 Jewish citizens a new Final Solution. Presumably, the first six million exterminated Jews are not enough?

We all heard from the lips of Barack Hussein Obama the call for Israel to return to the armistice lines of pre June, 4, 1967 and carve out from Judea and Samaria (the Jewish heartland) the so-called West Bank, a terror state to be called Palestine.

But these lines from June 4, 1967 were merely the armistice lines where the armies halted during the 1948 Arab-Israel War. 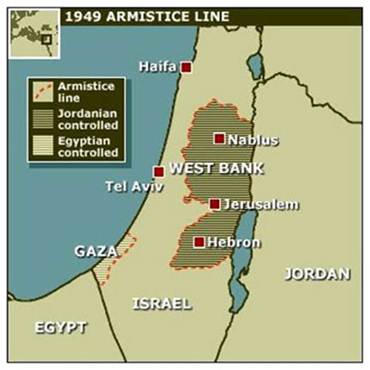 Before that Arab imposed war, Israel had reluctantly accepted the 1947 Partition Plan, which then would have created a Jewish and Arab state side by side. But the Arabs, then as now, rejected it outright. They wanted no Jewish state.

When the ceasefire took place, the Jordanian Arab Legion had invaded and illegally occupied Judea and Samaria — known by its Jordanian name, the West Bank. Jerusalem was cut in half and Israel's width at its most populous region was a mere nine miles wide from the Mediterranean to the foothills of the Judean mountain range.

Those lines were described by Abba Eban, Israel's UN ambassador and later, foreign secretary, as the Auschwitz lines.

President Obama demands that Israel be forced back into those outrageous and indefensible lines. He wants Jerusalem, Israel's 3,000 year old Jewish capital, to again be divided as it was during those terrible 19 years from 1948 to 1967. The world cheered when the Berlin wall came crashing down reuniting the city.

President Reagan had called upon Soviet President Gorbachev to "tear down this wall." Now President Obama calls upon Israeli Prime Minister Netanyahu to "build up a wall."

What this president has effectively done is to set an ever present sword of Damocles over Israel's future, which he well knows will become for the Left, for the Muslim world, and for all the haters of the Jewish people and state, an endless and relentless weapon to be used against Israel's survival.

For those who know history, there already exists a Palestinian state in all but name. It is Jordan, which consists of four fifths of the original Palestine Mandate and exists east of the River Jordan.

Britain created it in 1922 from the ruins of the defeated Ottoman Turkish Empire. It was wrenched away from the original Mandate territory and given to the Arab Hashemite Bedouin tribe: An historic and infamous betrayal by a British government of its promise to the Jewish people for the creation within the Mandatory territory of a Jewish National Home.

Immediately Jews were forbidden to live in it, even though it contains the ancient biblical lands that were a possession of the Israelite tribe of Manasseh. That land on the east bank of the Jordan River is Gilead.

Jordan's population is also four fifths Arabs who call themselves Palestinians. The other fifth consists of the Hashemite Bedouin, whose king Abdullah controls the state. But uneasy lies his crown.

The tiny remaining one fifth of the geographical territory, which was part of Mandatory Palestine, is all that is left for the Jewish people west of the River Jordan; A distance of barely 40 miles from the Mediterranean Sea to the Jordan River (including Judea and Samaria).

In this ever so small sliver of land, Obama and a hostile world would carve out another Arab state from Judea and Samaria (the West Bank) that will never live in peace with Israel.

Palestine is a geographical entity, like Siberia or Patagonia. It has never been a sovereign and independent nation in all of recorded history; certainly not an Arab state.

Let me quote from Professor Bernard Lewis of Princeton University and expert on Islam and the Middle East.

"From the end of the Jewish state in antiquity to the beginning of British rule in 1920, the area now designated by the name Palestine was not a country and had no frontiers, only administrative boundaries."

And from Professor Philip Hatti, an Arab historian writing in 1946:

"There is no such thing as Palestine in history, absolutely not."

In 1956, the Saudi Arabian delegate to the UN Security Council said:

"It is common knowledge that Palestine is nothing but southern Syria."

So that we see how illusory peace, true peace, can be, the Jewish prophet, Jeremiah lamented in the Bible: "Peace, peace but there is no peace." Jeremiah 6:14.

Those words were uttered after Jeremiah began his prophecies around 627 BC in Judah and before the great catastrophe befell the ancient Jews and the First Jewish Commonwealth was destroyed. Nebuchadnezzar, the Babylonian king came down from the north and destroyed the First Temple in Jerusalem. Jeremiah's words echo across the ages and warn again of the frailty of peace.

The conclusion to all this is that there can never be peace with an Arab people who remain Muslim. Israel must not voluntarily give away one more inch of the God given covenanted land in return for pieces of paper that can be torn up or international guarantees that can evaporate like clouds on a hot summer's day.

Israel must put its trust not only in temporal powers whose leaders — as we see with President Obama — can become a clear and present danger to both Israel and to America.

No, the people of Israel and America — two great democracies and civilizations facing Islam's threats — must always put their trust in Almighty God.

Certainly today there should be no appeasement of a Muslim enemy that hates both Jews and Christians. Instead Israel and America might be wise to follow the words of the brilliant English military leader and devoted Christian, Oliver Cromwell:

"Trust in the Lord, but keep your powder dry."