Victor Sharpe
Vile comments should have no place in Congress 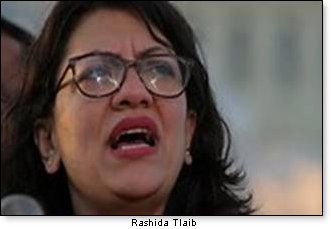 House Republican Conference Chair, Liz Cheney (R-Wyo.), knows well the warnings of history especially when she points out that; "History teaches us that anti-Semitism begins with words and becomes something far worse."

Hateful anti-Jewish tropes frequently drop from the lips of Rep. Rashida Tlaib (D-Mich). It is like corrosive acid laced with foul calumny.

This hate ridden and sometimes hijab shrouded woman made the obscene statement that, "the Holocaust gives her "a calming feeling" in part because her "ancestors the Palestinians" helped create "a safe haven for Jews." Nothing could be further from the truth.

The Arabs living in the British Mandated and non-state geographical territory known as Palestine did not provide any support for Jews either before, during or after the Holocaust. In fact, Arabs rarely gave "a safe haven for Jews" but instead routinely massacred ancient Jewish communities living in Gaza and throughout the country.

In 1929, Arabs committed an appalling massacre of Jews living in Hebron, one of the four holy Jewish cities, the others being Tiberias, Safed and the jewel in the crown, Jerusalem. So horrific was the scene of the hacked to death Jewish men, women and children in Hebron that hardened British soldiers serving in the Mandate were driven to tears.

As a good friend of mine and fellow writer, Robert Vincent, wrote: "What else can be expected from a people who still today hand out candy after innocent Jewish civilians are murdered in cold blood as a matter of course and in a deliberate and coordinated policy?"

"There is no justification for the twisted and disgusting comments made by Rashida Tlaib just days after the annual Day of Holocaust Remembrance," House Minority Whip Steve Scalise (R-La.) stated. "More than six million Jews were murdered during the Holocaust; there is nothing 'calming' about that fact.

"Unfortunately, this is far from the first display of heinous anti-Semitic comments coming from Democrat House members this year, and it's clear this is now the norm for their caucus," Scalise charged.

He said it was "long past time" for House Speaker Nancy Pelosi (D-CA.) to "take swift action and make it clear that these vile comments have no place in Congress."

This is not the first time that Tlaib has faced fire from her GOP colleagues. She has faced criticism in the past for other comments she made, including saying "we're going to impeach the mother f – er," in reference to President Trump on her first day as a member of Congress in January. Republicans were outraged by those comments, calling her use of profanity "disgusting."

Tragically, House Speaker Pelosi will not be moved, but seems fated to preside over an increasingly soft Islamic jihad infiltration of American politics and society. Tragically, also, she is part of the increasingly loony Left so-called progressives (read regressives) who have effectively hijacked the Democrat Party by allowing ingrates, Rashida Tlaib, Ilhan Omar and the apparatchiks of the so-called Council of American Islamic Relations (CAIR), to spew both anti-Israel propaganda while working to increase the penetration of hostile Islamic Sharia law in America.

From past experience we know that the uninformed often accept such falsehoods as those coming from Tlaib and Omar without question. This is what Liz Chaney warns against. To counter Arab and Muslim falsehoods here are facts not myths. Jerold Auerbach, wrote this in the Algemeiner newspaper:

"Palestine" emerged as an abbreviation of "Syria-Palestina, imposed by Roman Emperor Hadrian during his 2nd century AD campaign to obliterate the Jewish millennial connection to their Biblical homeland. Modern conceptions of Palestine did not appear until the 19th century. The more recent term "Palestine" dates from the League of Nations Mandate (1923) which granted Britain a Mandate and temporary governing power over the land, including Trans-Jordan; territory previously controlled for 400 years by the defeated Ottoman Empire."

The Rev. Alexander Keith, wrote that the Jews are, "a people without their ancestral country while their own land is a country without its people." Several years later Lord Ashley Cooper described the ancestral Jewish homeland as, "a country without a nation needing a nation without a country." He was referring to the Jewish people.

The Mandate recognized, "the overwhelming historical connection of the Jewish people with Palestine." During the early years of the British Mandate, Arabs in Palestine still had little awareness of a distinctive national identity. Testifying before the Peel Commission in 1937, Syrian leader Auni Bey Abdul-Nadi asserted: "There is no such country as Palestine. ...'Palestine' is alien to us. It is the Jewish Zionists who introduced it."

Even Columbia history professor, Rashid Khalidi, (friend of Barack Hussein Obama) would admit that before World War I Palestine did not exist in Arab consciousness.

All people living in Mandatory Palestine called themselves Palestinians and, unlike the Arabs, Jewish Palestinians were engaged in restoring the neglected homeland by draining the malarial infested swamps and making the deserts bloom again. In doing so, they served as a magnet for hundreds of thousands of itinerant Arabs from stagnant Middle Eastern countries to illegally flood into British Mandated Palestine in search of work and a better life. These are today's Arabs who now call themselves Palestinians. Their propaganda claiming thousands of years of ownership of the land is one of the biggest scams in history.

Shortly before the birth of the State of Israel, Arab historian Philip Hitti conceded: "There is no such thing as Palestine in history."

It is interesting to point out that at-least one-quarter of the Arab settlements in the Land of Israel have ancient Biblical Jewish names. Among them: Bethlehem (Beit Lechem), Hebron (Hevron), Beitin (Beit El), Jenin (Ein Ganim), Silwan (Shiloach), Nablus (Shechem), Tequa (Tekoa) and many, many more.

But such facts are, however, an inconvenient truth, easily dismissed by an inveterate liar and bigot as is Rashida Tlaib.

Victor Sharpe is a freelance writer and author of several books including the four volume work titled, Politicide.