Victor Sharpe
Is the Iranian regime finally nearing its end?

January 21, 2020
The spectacle of Democrats and the Left rushing lockstep in condemning President Trump and the United States military for ending the life of the Iranian monster, Qassem Soleimani, was one of the lowest points in recent American politics. So too was the Democrat's follow-up decision not to condemn the shooting down of the Ukrainian Airline passenger plane by Iranian missiles.

But then Democrats and the Left have long since abandoned both logic and morality when it comes to international and national affairs. Their seething hatred for President Trump is truly pathological.

So here was this creature, Soleimani, the blood soaked commander of the Iranian Quds Force and second in command to the despotic regime of Supreme Leader, Ayatollah Ali Khamenei. Soleimani was a man responsible for the deaths of well over 600 U.S. service men and women, along with the maiming of thousands more by Iranian manufactured IEDs: A man finally brought to justice for his hideous crimes against humanity.

It is not only Americans who have been the subject of Soleimani's hideous enmity. His legacy of death and destruction encompassed many more innocent victims, be they Kurds, Israelis, Saudis, Iraqis, Lebanese, Yemenis as well as his fellow Iranians who now protest daily in the streets of Iranian cities as they yearn to put an end to the unspeakable regime known as the Islamic Republic of Iran.

Before 1979, Iranian women had freedom. There are photos of them wearing Western dress. But since the overthrow of the Shah in 1979, and the attendant imposition by the ayatollahs and mullahs of their brand of theocratic obscurantism, they have been forced to wear the hijab or worse. Now Iranian women want to be free of that Islamic instrument of feminine bondage, even as Western feminists have abandoned them and consort instead with hijab wearing haters of America and Israel of the likes of Omar, Sarsur, ad nauseam. Such hypocrisy writ large!

Now a little appreciated but massive revolt against the obscurantist and hate filled ayatollahs and mullahs is there for all the world to see.

There is an Iranian ayatollah, one Ahmad Alamolhoda, who prides himself on being the Friday Prayer leader and member of the so-called Assembly of Experts – a body chosen by the Supreme leader himself.

Alamolhoda, announced recently that Iranian citizens must publicly tread on the flags of America and Israel that have been painted on floors and streets throughout Iran by the regime. These are the flags of what the mullahs call – the Big Satan and the Little Satan. If Iranians refused, they would be executed. The people refused.

I'm reminded of the late and wonderfully brave Italian journalist, Oriana Fallaci who once interviewed the newly installed Ayatollah Ruholla Khomeini in 1979. In an equally wonderful and principled rejection of then growing 'political correctness,' she told him what she thought of the veil and hijab he had ordered Iranian women to wear. She told him it was, "symbolic of the segregation into which Islam had cast women."

The Ayatollah angrily shot back by saying that it was none of her business. "If you do not like Islamic dress," he shouted, "you're not obliged to wear it, but Islamic dress is good and proper for women."

"That's very kind of you," Fallaci replied. "And since you said so, I'm going to take off this stupid, medieval rag right now."

With that, Fallaci removed her veil and left the room without saying another word. Now Iranian women, emulating Fallaci, are those bravely leading the protests against the regime's brutality and, in the process, casting aside their hijabs even in the face of the regime's bullets.

According to Amil Taheri, the highly respected Iranian born writer and specialist on Middle Eastern and Iranian matters, "by best estimates the Islamic Republic has executed more than 15,000 of its own people and driven more than 8 million Iranians into exile."

Despite all that, the Iranian regime has managed to survive, thanks in part to the shameful abandonment by Western powers and by President Obama during previous uprisings against the savage and brutal Islamic Republic.

Now, as that same Islamic Republic paints those flags everywhere, hoping Iranians will step on them, it is basically symbolizing its own maniacal obsession with the "Great Satan and the Little Satan." 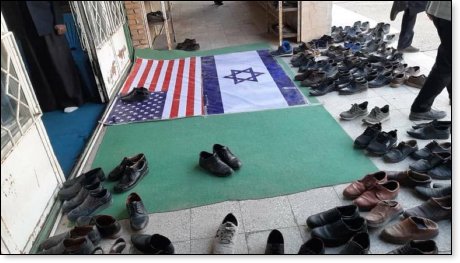 Outside a mosque in Iran, Iranians go out of their way to respect the flags.

The nobility and honor of Iranians who refuse to tread on the foreign flags, and who ignore with contempt the ravings of the ayatollahs, cry out for our support. Most Americans and Israelis, along with all freedom loving peoples around the world, should be inspired at witnessing such courageous signs of goodwill and respect by ordinary Iranians.

It is deeply saddening that so far we have yet to see more ways to convey admiration and provide vital assistance for the Iranian people at this critical time in their history.

But could the Iranian people's growing disgust at the insane squandering of their nation's wealth by the mullahs in funding terrorism, along with the regime's hegemonic ambitions to rule over Arab neighbors and destroy Israel, finally bring about the long awaited downfall of the malign Islamic Republic?

Meanwhile, protesters in the streets of Iran chant: "They are lying that our enemy is America and Israel. The real enemy is here!"

Victor Sharpe is a prolific freelance writer and author with seven published books including The Blue Hour and the acclaimed four volume work titled, "Politicide," which details the Islamist threat to the West and to Judeo-Christian civilization