Victor Sharpe
A good and godly two-state solution  Not the ungodly outrages of Messrs. Obama and Biden 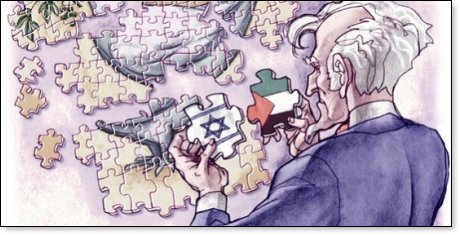 During eight baleful years, President Barack Hussein Obama made Israels life utterly miserable as he pursued relentlessly his warped vision of a Two State Solution to the Israel-Palestinian conflict – which should be better known as the Israel-Islam conflict as you will see. But that vision, as imagined yet again by some malign handlers of Joe Biden, would remain national suicide for Israel.

Another American leader, President Trump, was asked if he favored a Two-State or a One-State Solution to the Israel-Palestinian conflict. He was open, he said, to what the parties agree to, but then said, I like the two-state solution. Thats what I think works best.

But where would a so-called Palestinian state be located? To create yet another Arab state, this one torn out of Judea and Samaria  the tiny Biblical and ancestral Jewish heartland west of the River Jordan (known also as the West Bank)  would be a monumental travesty of both God given Biblical and post-Biblical reality and history. It would also be an existential threat to Israels very survival.

But if Jordan, which is populated by two thirds Arabs who call themselves Palestinians, becomes the Palestinian state then I say yes to a two-state solution, but only if that Arab state is located east of Israel, the Jewish state, which retains full sovereignty from the Mediterranean Sea to the River Jordan, (still a miniscule state stretching a mere 40 miles at its widest). The far vaster Palestinian Arab state would be east of the Jordan River. With this in mind, I deeply respect the work of Ted Bellman who has been advocating for a Jordan is Palestine solution.

Jordan constitutes some 80 percent of the old British Mandate, or what was known then as geographical Palestine. This region never included an independent or sovereign Palestinian Arab state throughout all of recorded history, nor was there ever an independent Arab Palestinian people. Geographical Palestine was simply a territory, for example as is Siberia or Patagonia today. But there was one indigenous people in the Land since time immemorial; the Jewish people. Its all in the Bible.

To fully understand the origins of the Israel-Palestinian conflict, we must go back to the early years of the 20th century. In 1920, Great Britain was given the responsibility by the League of Nations to oversee the Palestine Mandate with the express intention of reconstituting within its territory a Jewish National Home based upon the original intent of the Balfour Declaration of November 29, 1917.

But Great Britain in 1922 arbitrarily tore away all the vast territory east of the River Jordan and gave it away to the Arab Hashemite tribe as a compensation for giving up the throne of Arabia to the Saud family. The territory and entity became Trans-Jordan and British officials claimed that the gift of Mandatory Palestine east of the Jordan River was also in gratitude to the Hashemites for helping defeat the Turks. However, Lawrence of Arabia described in derisory terms this Hashemite role as a side show of a side show.

Ironically, Britain was aided far more by the Jewish Nili underground movement in defeating the Ottoman Turkish Empire which had ruled geographical Palestine for 400 years. This then was the original partition of Mandatory Palestine  the first two-state solution. Trans-Jordan, as it was then known, covered some 35,000 square miles, or nearly four fifths of the erstwhile Palestine Mandate. Immediately, Jewish residence in this new Arab territory was forbidden in what was, and is, a glaring example of Islamic apartheid. It is thus historically and unequivocally correct to state that Jordan is Palestine.

During its administration of the remaining Palestine Mandate, west of the River Jordan and until 1947, Britain severely restricted Jewish immigration and purchases of land while turning a blind eye to massive illegal Arab migration into the territory from neighboring stagnant Arab states. The descendants of those illegal migrants make up most of the Arabs who now call themselves Palestinians.

The British Foreign Offices sorry record of appeasement of the Arabs and bias against the Jewish people, at the expense of Jewish destiny in the remaining tiny territory, culminated in the infamous 1939 White Paper, which limited Jewish immigration to just 75,000 souls for the next five years. This draconian policy, coming as it did on the eve of the outbreak of World War 2, dealt a deathblow to millions of Jews attempting to flee to safety from extermination by Nazi Germany and its European supporters.

Britains mismanagement of the Mandate finally led to the United Nations Partition Plan of 1947. The Jewish Agency reluctantly accepted this additional dismemberment of what was left of the promised Jewish national home in Mandatory Palestine. They did this to provide a refuge for the surviving Jewish remnants of the Holocaust and for the 800,000 plus desperate Jewish refugees who were driven penniless out of their homes throughout the Arab world. In contrast, the Arab regimes rejected the Partition Plan even though a Palestinian state would have come into existence at that time. Then, as now, the Arabs plotted and warred against the existence of an independent Jewish state.

Israel was officially reborn as a sovereign nation in 1948, and its 600,000 Jews fought to survive the massive Arab onslaught, which was intended to exterminate the Jewish population and destroy the reborn homeland.

Trans-Jordan, renamed the Kingdom of Jordan in 1946, joined the other Arab nations in invading the newly reconstituted Jewish state, driving out the Jewish inhabitants from the eastern part of Jerusalem and the Old City, annexing the Biblical and ancestral Jewish heartland of Judea and Samaria and renaming it the West Bank. Only Britain and Pakistan recognized this illegal annexation.

In the June 1967 Six-Day War, Israel defeated the combined Arab armies and liberated Jewish and Christian holy sites in Jerusalem, Judea, and Samaria from the Jordanian occupation. But in return for Israeli offers to help create a Palestinian state, the Arab League, meeting in Khartoum in August 1967, delivered the infamous three Nos: No peace with Israel, No negotiations with Israel, No recognition of Israel.

It is within the narrow 40-mile-wide territory remaining for the Jewish state, if one includes Judea and Samaria, that a hostile world now demands the establishment of a fraudulent Arab and terrorist state to be called Palestine  a state that has never existed in all of recorded history.

Here then is the present unworkable and so-called Two-State Solution, which would dismember what is left of Israel and drive hundreds of thousands of Jewish residents from their homes, villages, and farms in Judea and Samaria. The searing tragedy is that such a Two-State Solution would presage for the Jewish people yet another Final Solution  the German Nazi regimes euphemism for the Holocaust.

The empirical fact is that this is not a dispute over borders. This is a religious war and the Arabs, overwhelmingly Muslim, will never accept the existence of any non-Muslim state in territory previously conquered by them in the name of Allah. They will relentlessly follow Islamic Koranic law and wage war against Israel  the Dar al-Harb. The cognitively impaired President Biden and his Marxist handlers are well aware of this fundamental Islamic fact, yet appear egregiously willing to unleash another terrible injustice against the embattled Jewish state.

A Two-State Solution must be between Israel, with full sovereignty west of the Jordan River, and Jordan having sovereignty east of the River Jordan, but which  if the Arabs in Jordan so choose  could be renamed Palestine; an idea for which Ted Bellman and others, including myself, have consistently advocated.