Victor Sharpe
Why the Kurds deserve a state, not the Arabs who call themselves Palestinians 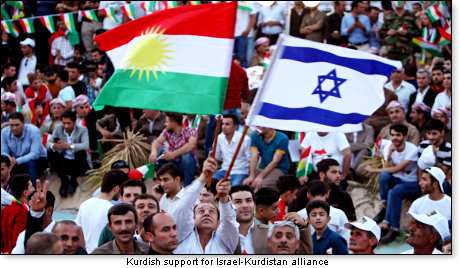 There are well over twenty Arab states throughout the Middle East and North Africa, but the world demands, in a chorus of barely disguised animosity towards tiny Israel, that yet another Arab state be created. This one would be torn out of the ancient Biblical and ancestral Jewish heartland of Israel, the miniscule territory between the Mediterranean Sea and the River Jordan known as Judea and Samaria – or still called by a maliciously hostile world, the ‘West Bank.’

Israel, a territory no larger than the tiny principality of Wales or the state of New Jersey, would be forced to share this sliver of land with a new and hostile Arab entity to be called Palestine. This would result in its present narrow waist reduced yet again to a mere and suicidal nine miles in width at its most populous region – what an earlier Israeli statesman, Abba Eban, described as the Auschwitz borders for good reason.

Remember, there has never existed in all of recorded history an independent sovereign nation called Palestine – and certainly not an Arab one. The term "Palestine" has always been the name given to a non-state geographical territory, such as Siberia or Patagonia are. It has never been a sovereign independent state.

But there is an indigenous people in the Middle East who deserve a state and, like the Jews, trace their ancestry back thousands of years They are the Kurds, and it is highly instructive to review their remarkable history in conjunction with that of the indigenous Jews. It is also necessary to review the historical injustice imposed upon them over the centuries by hostile neighbors and empires.

Let us go back to the captivity of the Ten Tribes of Israel, who were taken from their land by the Assyrians in 721-715 BC. Biblical Israel was forcibly and mostly depopulated, its Jewish inhabitants deported to an area in the region of ancient Media and Assyria – a territory roughly corresponding to that of modern-day Kurdistan.

Assyria was, in turn, conquered by Babylonia, which led to the eventual destruction of the southern Jewish kingdom of Judah in 586 BC. The remaining two Jewish tribes were sent to the same area as that of their brethren from the northern kingdom. Its all in the Bible.

When the Persian conqueror of Babylonia, Cyrus the Great, allowed the Jews to return to their ancestral lands, many Jews returned while others remained (and continued to live) with their neighbors in Babylon – an area which, again, included modern-day Kurdistan.

The Babylonian Talmud refers in one section to the Jewish deportees from Judah receiving rabbinical permission to offer Judaism to the local population. The Kurdish royal house and a large segment of the general population in later years embraced the Jewish faith. Indeed, when the Jews rose up against Roman occupation of Judea in the 1st century AD, the Kurdish queen sent troops and provisions to support the embattled Jews.

By the beginning of the 2nd century AD, Judaism was firmly established in Kurdistan, and Kurdish Jews in Israel today speak an ancient form of Aramaic in their homes and synagogues. Kurdish and Jewish life became interwoven to such a remarkable degree that many Kurdish folk tales are connected with Jews.

It is interesting to note that several tombs of biblical Jewish prophets are to be found in or near Kurdistan. For example, the prophet Nachum is in Alikush, while Jonah's tomb can be found in Nabi Yunis, which is ancient Nineveh. Daniel's tomb is in the oil-rich Kurdistan province of Kirkuk; Habbabuk is in Tuisirkan; and Queen Hadassah, or Esther, along with her uncle Mordechai, is in Hamadan.

After the failed revolt against Rome, many rabbis found refuge in what is now Kurdistan. The rabbis joined with their fellow scholars, and by the 3rd century AD, Jewish academies were flourishing. But the later Sassanid and Persian occupations of the region ushered in a time of persecution for both the Jews and Kurds, which lasted until the Muslim Arab invasion in the 7th century. Indeed, the Jews and Kurds joined with the invading Arabs in the hope that their action would bring relief from the Sassanid depredations they had suffered.

Shortly after the Arab conquest, Jews from the autonomous Jewish state of Himyar in what is today's Saudi Arabia joined the Jews in the Kurdish regions. However, under the now-Muslim Arab occupation, matters worsened, and the Jews suffered as dhimmis in the Islamic-controlled territory. The Jews found themselves driven from their agricultural lands because of onerous taxation by their Muslim overlords. They thus left the land to become traders and craftsmen in the cities. Many of the Jewish peasants were converted to Islam by force or by dire circumstances and intermarried with their neighbors.

From out of this population arose a great historical figure. In 1138, a boy was born into a family of Kurdish warriors and adventurers. His name was Salah-al-Din Yusuf ibn Ayyub – better known in the West as Saladin. He drove the Christian crusaders out of Jerusalem even though he was distrusted by the Muslim Arabs because he was a Kurd. Even then, the Arabs were aware of the close relationship that existed between the Kurdish people and the Jews.

Saladin employed justice and humane measures in both war and peace. This was in contrast to the methods employed by the Arabs. Indeed, it is believed that Saladin not only was just to the Christians, but he allowed the Jews to flourish in Jerusalem and is credited with finding the Western Wall of the Jewish Temple, which had been buried under tons of rubbish during the Christian Byzantine occupation. The great Jewish philosopher, rabbi and doctor, Maimonides. was for a time Saladin's personal physician.

According to a team of international scientists, a remarkable discovery was made in 2001. Doing DNA research, a team of Israeli, German, and Indian scientists found that many modern Jews have a closer genetic relationship to populations in the northern Mediterranean area (Kurds and Armenians) than to the Arabs and Bedouins of the southern Mediterranean region.

But let us return to the present day and to why the world clamors for a Palestinian Arab state, but strangely turns its back upon Kurdish national independence and statehood. The universally accepted principle of self-determination seems not to apply to the Kurds.

The brutal fact in realpolitik, therefore, is that the Arabs who call themselves Palestinians have many supporters who are motivated far more by labyrinthine and Judeophobic hatred – sadly motivated by Christian and Islamic texts – than by real concern for the Arabs who call themselves Palestinians. The Kurds, like the Jews, have few friends, and the Kurds have little or no influence in the international corridors of power.

As Melanie Phillips explains in a recent article, and I fully agree with her, most people don’t care about the Palestinians but what does animate a terrifying number of their supporters is a deep desire for the Jews to vanish from the world. As she writes, “Palestinianism is not just about the eradication of Israel. It has weaponized Israel against the Jewish people.”

The old nostrum, therefore, that only when the Palestinian Arabs finally have a state will there be peace in the world is a mirage in the desert. Fellow writer Gerald Honigman also writes on the world's preoccupation with the Arabs who call themselves Palestinians while ignoring the plight of the Kurds, Berbers, Assyrians, Copts and Yazidis and millions of other non-Arab peoples of the Middle East and North Africa.

During the tyranny of Saddam Hussein, the Kurds were gassed and slaughtered in large numbers. They suffered ethnic cleansing by the Turks and continue to be oppressed by the present Turkish government. On the basis of pure realpolitik, the legality and morality of the Kurds' cause is infinitely stronger than that of the Arabs who call themselves Palestinians.

On the other hand, after the overthrow of Saddam Hussein, the Kurds displayed great political and economic wisdom. How different from the example of the Gazan Arabs who, when foolishly given full control by Israel over the Gaza Strip, chose not to build hospitals and schools, but instead bunkers and missile launchers. To this they have added the imposition of sharia law, with its attendant denigration of women and non-Muslims.

The Kurdish experiment, in at least the territory's current quasi-independence, has shown the world a decent society where all its inhabitants, men and women, enjoy far greater freedoms than can be found anywhere else in most of the Arab and Muslim world.

A Palestinian Arab state will immediately become a haven for anti-Western terrorism, a base for al-Qaeda and Hamas (the junior partner of the Muslim Brotherhood), and a non-democratic land carved out of the Jewish ancestral and biblical lands of Judea and Samaria upon which the stultifying shroud of sharia law will inevitably descend. In short, it will be established with one purpose: to destroy what is left of embattled Israel.

With its millennial association of shared history alongside the Kurdish people, who number over 30,000,000, scattered throughout northwestern Iran, northern Iraq, Syria and Turkey, it is natural justice for the Jewish State to fight in the world's forums for the speedy establishment of an independent and proud Kurdistan. An enduring alliance between Israel and Kurdistan would be a vindication of history, a recognition of the shared sufferings of both peoples, and bring closer the advent of a brighter future for both non-Arab nations in a nasty neighborhood.

Mahmoud Abbas, Holocaust denier and head of the so-called Palestinian Authority, has never and never will abrogate publicly in English or in Arabic the articles in Fatah's constitution, which call for the the destruction of the Jewish State and the genocide of its citizens. This mirror’s the call for the genocide of Israel and its people by the monstrous occupiers of Gaza known as Hamas.

So much for the fraudulent Arabs who call themselves Palestinians whom Joe Biden and the immoral UN and European Union now shower with money, much of which enriches the private bank accounts of Fatah and Hamas apparatchiks or funds deadly anti-Israel terrorism.

It is the Kurds who unreservedly deserve a state. As I wrote in an earlier article during Obama’s presidency, the invented Palestinian Arabs have forfeited that right by their relentless aggression, crimes, and genocidal intentions towards Israel and the Jewish state.