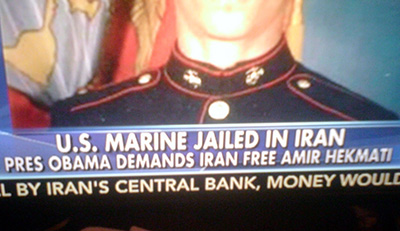 "We should stop being bashful and letting ourselves be kicked around by third-rate countries." Rep. Larry J. Hopkins, R-KY, speaking on the Iranian hostage crisis, 1981.

When it comes to Americans held in Iran, President Obama and his apologists put more time and effort into spin at home than putting pressure on Iran.

This past Monday night on Fox News' "On the Record" with Greta Van Susteren, Greta interviewed the sister and brother-in-law of Amir Hekmati, the former U.S. Marine who was arrested and imprisoned in Iran while visiting his grandmother back in August of 2011. Hekmati, an Iraq War veteran and linguistics expert, is probably one of the brightest minds we have in America today. His exemplary military record is best seen succinctly on his Wikipedia page. (In this instance the Wikipedia entry is well sourced.)

Here's where the spin comes in. During Greta's interview with the Marine veteran's family, a graphic across the bottom of the screen read: "President Obama demands Iran free Amir Hekmati." He did? I hadn't heard about that and Greta was certainly not talking about it at the time. The graphic was misleading. It seems to be based on a headline that originated in the International Business Times on March 20th that read, "Iran-US Relations: Obama Demands Release Of 3 American Detainees By Iranian Government."

It seems that on the same day Obama released his "Happy Nowruz" (The Iranian New Year) video to the Iranian people (in which he mentioned nothing about Americans held in Iran), he also released a written statement via the Whitehouse.gov website asking for the immediate release of three Americans held in Iranian prisons. He also asked for help in locating a fourth. I guess he's counting on Iranian leaders checking the website regularly.

Obama's request for immediate release stated that he was just "reiterating" the request; so the true translation is, "I know I've asked this before but I'll run it up the flagpole again just for kicks." The request came gift-wrapped in a warm, fuzzy Nowruz basket. It talked of the "spirit of family" and a "new spring" filled with "joyous moments." Only an Obama apologist would describe it as "demanding." It was an emotionally crafted message meant to coddle the American people. It was never meant for Iran.

According to the American Center for Law and Justice (ACLJ) however, it was the perfect thing to try because "Iran often grants a reprieve or even releases prisoners to celebrate the (Nowruz) holiday." But like a modern day "Give us Barabbas!" moment, things didn't go as planned. Nowruz came and went while the Iranians predictably laughed at us in secret once again.

Earlier this year, at a January press conference, Press Secretary Josh Earnest was spinning away while being asked about another American being held in Iran. A reporter inquired, "Is it conceivable that the United States would strike a nuclear deal with Iran while (Washington Post Tehran Bureau Chief Jason Rezaian) is still imprisoned without public charge? Is it conceivable that could happen?"

Earnest claimed that during the Iranian nuclear talks, Secretary of State John Kerry had "reiterated" to his Iranian counterpart "our call for Jason's immediate release as well as the release of Mr. Hekmati and Mr. Abedini, and the information necessary to locate Mr. Levinson." Really? Because with Kerry's track record, the American people would like to see some proof of that. There seems to be a lot of "reiterating" going on that is accomplishing absolutely nothing.

The reporter asked again bluntly, "So your answer to my question is, yes, the United States would strike the ideal with Iran on the nuclear issue even if these Americans are still being held by Iran?" With this, Earnest kicked up the spin and told the reporter that "the way that this question is typically asked of me is if we would consider allowing Iran to take some steps on their... nuclear program in exchange for them taking some steps related to these American citizens that we're very concerned about."

Earnest couldn't come out and say, "Yes, we're going ahead with the Iranian deal no matter how many Americans are being unjustly held and tortured in Iranian prisons." He couldn't say that, so he created a question he could answer.

The sad part is that none of these families are receiving any information from the State Department regarding efforts to free their loved ones in Iran. While it was a step in the right direction for Obama to release a statement asking for their release, it's sad that these imprisoned Americans' families have to keep begging their president for help and thanking him on bended knee when he throws them a bone.

It's clear that the "Statement by the President on U.S. Citizens Detained or Missing in Iran" was posted strictly to garner headlines that he had "demanded" their release and mislead the American people into thinking he had actually done something.

Monday night, Hekmati's sister and brother-in-law were visibly shaken as they spoke with Greta, begging the State Department to bring their loved one home. They reported he was malnourished and emaciated after losing more than 30 pounds.

The week before, Montel Williams, celebrity, Marine Corps veteran and champion of veterans causes, appeared on Greta's show and told her "the jailed Marine has been whipped and even made addicted to drugs just so that he could be tortured with withdrawal." Williams appeared with Greta again a few days later, breaking down in tears near the end of the interview as he said that Hekmati is being held as a prisoner of war because of his service in Iraq:

He hasn't seen a counselor; he has no Red Cross access. Please just give this soldier the dignity of life! We give it to these guys down in Gitmo!...How dare we make a deal and even contemplate signing one...without bringing our citizens home? I don't get it.

All of these people were granted permission to go into Iran, this is not a situation where somebody wandered across the border...This is a president who (traded) five terrorists at GITMO for Bowe Bergdahl, yet this man who has served in Iraq as a Marine and later as a contractor, he's still languishing in prison. What this tells you is the character of the regime...in terms of Iran, we're going to rely on their promise to comply with their commitments on the nuclear agreement when they do this to American citizens? Forget about it.

As President Obama posts symbolic-only messages on the White House website to appease the American people, and Press Secretary Josh Earnest spins reporters' questions into something he can answer, Americans are being tortured in Iranian prisons for lack of American leadership.

Susan D. Harris can be reached at www.susandharris.com

Susan D. Harris holds a degree in Telecommunications  Radio and Television Broadcasting, with a minor in Journalism. She formerly worked as a newspaper reporter and has written for various newspapers and magazines. Additionally, she studied theater on scholarship in Londons West End, the National Theater, and Swan Theatre, Stratford-upon-Avon. She can be reached at http://susandharris.com/

April 16, 2018
How the gods of globalism slit the throat of assimilation

April 3, 2018
The tumultuous effect of the LGBT agenda on one young mind

February 26, 2018
On finding warnings for America from Rev. Billy Graham

January 13, 2018
Groomed for paradise or WWIII? The race for the Red Sea

August 21, 2017
Itching for a fight: America under siege before Charlottesville

August 17, 2017
Sabotage and destruction: from my house to the White House

April 6, 2017
Three who kept the communists at bay in popular culture