Jen Shroder
Abortion: we were young and deceived

December 21, 2009
My son stood larger than life, the sun dancing on his hair, his eyes sparkling as he laughed with his teammates in all the bravado only teammates can share. Grinning from ear to ear, ahead in a major semi-pro football game, my son was radiant with the joy of it, and I thanked God for days such as this. 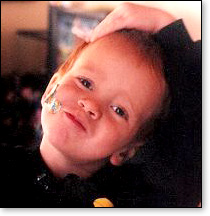 I once had the RIGHT to kill him. For a second I imagined him not there.

That thought shot through my body like ice and anger at women like Nancy Pelosi welled up inside. What kind of monster would fight to kill innocents? What sick and twisted people are these to campaign that our tax dollars be used to MURDER men like my son, to confuse young teens carrying children, to convince them they aren't children at all but worthless cells. Those poor teens and young women have no idea what they're doing and how they would regret it for the rest of their lives.

From the moment of conception it is determined what color eyes they will have, what color hair, whether or not they have freckles. As my son smacked his teammate in brotherly affection, overwhelmed with the glory of the day, it bristled me to know I could have ignorantly killed him thanks to the efforts of abortion-crazed politicians.

I proudly watched my son square his shoulders and reach for his helmet, it was time to do his job on the defensive line again. I was laying on the grass at the top of a shaded hill, propped up on my elbows to see. Suddenly I flashed back to the day I lay much like this, only weeping hysterically into the carpet after learning a few hours before that I was pregnant again. I had been so careful with birth control, it couldn't be possible.

I panicked. I just wanted to run. I got in my car and drove north, irrationally trying to escape. I was half way to Bridgeport in a snowstorm when I realized I had no money with me and was getting low on gas. Stranded and freezing to death in the snow would be as bad of a backup plan as abortion was. I turned around.

Most of my friends have had at least one abortion but I just couldn't. I had already given up my firstborn to adoption. That was better than killing him but it ripped my heart out, I wouldn't do that again. I didn't care what my boyfriend or anyone else said, I was having this child and I was keeping it.

From that day to this on the football field, watching my son makes it so clear. ABORTION IS WRONG. No one should have the right to murder my children, not even me. From my first who found us all the way from Afghanistan in the Air Force, to my last who is about ready to fly from the nest, I couldn't be more proud of all of them. And my heart breaks for every young girl who listened to the likes of Pelosi or Obama or any infanticide politician fighting to keep the abortion mills churning.

Don't beat yourself up if you've had an abortion. It is not your fault. You think you knew what you were doing, maybe something at the time told you not to but you did anyway. You were young. You listened to women that seemed to know. You trusted the wrong people, you were deceived. Your whole life you listened to people in authority, why did you think you would stop right at the doorstep of womanhood, facing a situation that would rock your world?

If you are without child, you have already paid far too dearly for being misled. Don't blame yourself. God doesn't. God forgives and forgets and cares for your little one, King David confirmed that Biblically. God does not condemn you because His own Son paid for all of our many wrongs for those who receive Him, so give up the guilt.

But remember from this day forward, remember in the voting booth. I tell you the truth, anyone who votes for a pro-abortion candidate may as well pick up the butcher utensils and scrape out a womb. Paying someone else to do it is just as bad.

To Barack Obama, Nancy Pelosi, Harry Reid, Lois Capps: you are wrong to fight to provide women with the means to murder their own. The National Right to Life Committee has already condemned the doublespeak of Sen. Bob Casey looking to gain Sen. Ben Nelson's vote for the pro-abortion health care bill. Abortion NEVER should have been dangled before me when I was weak and insecure You are worse than Herod that ordered the slaughter of innocent children, only your methods are different. LOOK at the blood you strive to put on America's hands as you fight for abortion on demand.

Turn around. You don't want to go before the Father with millions of deaths on your hands.

Turn around. You were not born to slaughter babies.

And to all the grieving childless moms, remember in the voting booths. Watch to see who votes pro-life and remember:

"We hold these truths to be self-evident, that all men are created equal, that they are endowed by their Creator with certain unalienable Rights, that among these are LIFE, Liberty and the pursuit of Happiness."