Jen Shroder
The truth about Islam

January 6, 2010
Is the Quran really "all that" when it comes to Islam? Using only the Quran, a Muslim wouldn't know the basic tenants of Islam. A convert would not know how to convert, pray, support surviving families of suicide bombers, fast during Ramadan or make the pilgrimage to Mecca if he only read the Quran. All this information is in the Hadiths (what Mohammed did) and Sira, (Ibn Ishaq's Sirat Rasul Allah). These books contain the method of Mohammed. What Mohammed did and how he did it is far more important to Islam than the Quran, but that is downplayed because the Hadiths and Sira outline how to dominate the world through violence. It's what all our universities and media won't divulge because if they did, we would understand Islam and wake up to the THREAT that it is. 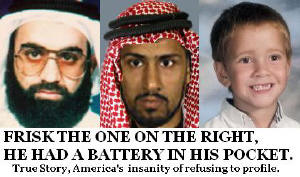 "Peaceful" Islam is a contradiction of terms and cannot exist. Islam is far more political than religious because Mohammed failed to sway people to him through religion. He had far more success through violence. "Moderate" Islam is merely the West trying to convince Muslims that Mohammed's beheading of 600 to 900 people who refused to convert was just Mohammed having a bad day. He didn't really mean it, right? All these other Muslims following in his footsteps throughout the centuries are doing so in contradiction to...uh...oh yeah, in contradiction to what Mohammed said when he was trying to convince the Jews and Christians that he was their prophet. He butchered them when they rejected those words...but hey, forget about that, let's focus on his kind sayings before he drew the sword and started hacking.

In fact, let's take those kind words and present it to all our children in public schools as a fun religion. Let's have our kids pretend they're Muslims fighting for Allah. And when it's time to study Judaism, let's have our kids pretend they are Jews getting thrown out of their homeland. These ARE the lessons in our textbooks!!! And the Christians get to pretend they were back in underground tombs (think about the significance of that for a moment).

While our troops, Daniel Pearl, Paul Johnson and others were being tortured and filmed as their heads were cut off, American teachers were telling our kids to recite the same exact words of prayer as the terrorists, some on their hands and knees. The Eklunds sued over this but Judge Phyllis Hamilton ruled this is appropriate because the children don't actually BELIEVE in the god they are told to pray to, it's a "simulation" which studies show helps them learn.

Have you never wondered why the history of Islam's jihad doesn't quite line up with the presentation of "peaceful" Islam? Roughly 270 MILLION people have been butchered in the name of Allah through Mohammed. How many people have been butchered by Christians? Though many have claimed to kill in the name of Christ, did Christ EVER butcher people and tell His followers to go out and do the same? Such behavior is not sanctioned by the Bible, it IS with the holy books of Islam!

Domination is demanded by Mohammed whereas Jesus Christ taught forgiveness. As He hung on the cross. He said, "Father, forgive them, they don't know what they're doing." What did Mohammed say? Words like: "I WILL CAST TERROR INTO THE HEARTS OF THOSE WHO DISBELIEVE. THEREFORE STRIKE OFF THEIR HEADS AND STRIKE OFF EVERY FINGERTIP OF THEM." [1]

The only way a Muslim is guaranteed heaven is to die killing unbelievers for Allah, it is paramount to the belief system. What is paramount to Christians? To receive Jesus Christ and then to follow Him by loving, forgiving and sharing the Gospel. God demands we love even those who persecute us, something I struggle with often, but it is a fact for the obedient Christian.

And what is the burden for the obedient Muslim? Honor killings. To humiliate unbelievers (kafirs), to allow those they conquer to exist but to grind them down to submission as "dhimmis," who have no civil rights. If we allow Islam to dominate our nation, dhimmitude will be our fate. If a Muslim harms a dhimmi, the dhimmi cannot sue. He must wear clothes so he can be easily identified as a dhimmi, an open target to be bullied. Life is supposed to be miserable as coercion to convert and we're worried about singling out a follower of Islam as someone of interest when boarding a plane?

Our universities, our media, our politicians are already submitting to Islam. They are afraid not to. Clinton already kowtowed to Islam by offering our children through public education. He wrote "Religious Expression in Public School" with Abdurahman Alamoudi who is currently in jail for terrorist acts. [2]

President Bush would have none of it. Our liberal journalists don't like that we're in a war but thankfully, President Bush appreciated FREEDOM while in office. Now Obama is running around bowing and apologizing to Saudi kings even though he was warned that would be seen as a sign of weakness and attacks would increase. With this latest attack on Flight 253, Obama sounded more like Mutallab's defense lawyer with words like "suspect" and "allegedly." Does Obama care? Does the President who was born a Muslim, was given a Muslim name, registered as a Muslim in a Catholic school (that took dedication) and has people who grew up with him saying he was very devout in his Muslim beliefs...does he care if America submits or dies by the sword? THAT man promised hope and change and is getting it with every socialist thug he puts in a position of power and with every Gitmo prisoner he sends back to Yemen.

I think far more happened on the day Obama bowed to that Saudi King. I think that was the day our land was officially and unknowingly dedicated to Islam by Obama, handed over on a platter.

America, we have taken our faith and freedom for granted.