Jen Shroder
"Return to Me," saith the LORD

Over and over throughout history, God has outlined this message to the Jews. Over and over again the Jews would not listen and were almost annihilated. Do we, as Americans, believe we should fare better? We began as a Christian nation, and God has blessed it. Slowly with time our nation has become increasingly corrupt to the point we are aborting babies to enjoy a promiscuous sex life that schools endorse and promote. Now we teach children homosexuality and how to pray to Allah, to participate in any and all religions except that of His Son, Jesus Christ. Atheists are fighting to remove the Ten Commandments and the Supreme Court is defying our Constitution to bow down. Does America think itself so proud that it can snub our nose at God? 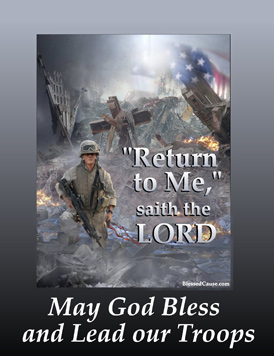 "That day is a day of wrath, A day of trouble and distress, A day of devastation and desolation, A day of darkness and gloominess, A day of clouds and thick darkness, A day of trumpet and alarm, Against the fortified cities, And against the high towers. I will bring distress upon men, And they shall walk like blind men, Because they have sinned against the Lord; Their blood shall be poured out like dust, And their flesh like refuse." Zephaniah 1


We teach our children to bow to other gods and when the nations of those gods surround us, we are astonished. We call out to the God of Abraham, Isaac and Jacob but He will not hear our leaders who have taken us to such blasphemous places and then call out His name and pretend to know Him! Before the smoke has cleared we return to our idolatries, our games, our vain occupations and say the Lord will accept us because we are worthy.


We provoke our own death and destruction! Do not blame the Muslims or the Chinese or the Russians or the North Koreans, Iran or Iraq or the nations that gather against us. As a nation we are guilty before God! We have brought what is coming on ourselves! If you know Him, stand fast in what you have. If you don't know the God of Abraham, Isaac and Jacob, if you have not reconciled yourself to Him through Jesus Christ who suffered, died and rose again to purchase you that you could be His...now is a good time to start.

I urge you, call to the God of Abraham, Isaac and Jacob while there is still time. Though they claim victory in the name of Allah, it is not Allah who empowers them. For years we have been calling down our own death and destruction. God will deal with those who will celebrate in our sorrows, and even so, we must pray for them and share the Good News of Jesus Christ, even in the face of their gloating and persecution.


"Your fathers, where are they? And the prophets, do they live forever? Yet surely My words and My statutes, Which I commanded My servants the prophets, Did they not overtake your fathers?

"You have sown much, and bring in little; You eat, but do not have enough; You drink, but you are not filled with drink; You clothe yourselves, but no one is warm; And he who earns wages, Earns wages to put into a bag with holes." (Haggai 1)


If we are with Jesus Christ, even in the midst of suffering, we have Everything. Pray for those who do not know Him. Though they may seem to gain the upper hand, their grasp is empty.

God is everything. And Jesus Christ is the only way to Him. Forgive your enemies, seek Him and live. Jesus said He would never leave nor forsake us, and He won't. There is not a thing that will happen in the Christian life that He is not intently aware of. He never stops thinking about us. Yet He said we would suffer in this life, but He would be with us through it. If we keep our eyes on Him through the storm, we can walk on water.

And when we finally go home to be with Him, He will have a place prepared for us. This is not our time, this is God's time. Time for those who do not know Him to learn about Him through the Holy Spirit, through the Bible and through us.

No, God will not leave us, but as a nation, we are about to reap the whirlwind. Our only chance for more time is revival. Will we, as a nation, turn around? Will we continue to defile the land?

When the Israelites repented and returned to the Lord, He welcomed them with open arms. Will we, and Israel, repent and turn around? Or will we face certain destruction of our own doing? Will we continue to sacrifice our children?


"If My people who are called by My name will humble themselves, and pray and seek My face, and turn from their wicked ways, then I will hear from heaven, and will forgive their sin and heal their land." 1 Chronicles


We Christians comfort ourselves with that verse often, but forget the next verses. And lo, more and more Christians are beating up Christians for daring to name sins. Many of us are happy to see our children dance to African gods, bow and pray to Allah, look the other way as children are told to honor homosexuals and when they are 17, tell our children to experience many men or women before marriage and yet fully believe they are following God! It will not stand! Sin pollutes the land and land is hemorrhaging it as we spread pornography, abortion, homosexuality in Christ's name! Whether or not you believe we are a Christian nation, the world sees us as Christian even as we spew the vilest of sins upon the rest of the world. It will not stand!


"And as for this house, which is exalted, everyone who passes by it will be astonished and say, 'Why has the Lord done thus to this land and this house?' 22 Then they will answer, 'Because they forsook the Lord God of their fathers, who brought them out of the land of Egypt, and embraced other gods, and worshiped them and served them; therefore He has brought all this calamity on them.'"


Understand. Since Jesus Christ expanded the tent pegs in invitation to all the world, "Egypt" is the world and "Jerusalem" is His people! Babylon IS US! For we have pushed "multiculturism" and in that we are harlots, led by godless atheists running our universities with the full knowledge they are attacking Christianity. Look at Karen Armstrong, an ex-nun who wanted to be a saint but couldn't stand being alone with God for five minutes in prayer so she left the church to lead our children to other gods while proving Christianity is "bonkers." She is described as a "prominent and prolific religious historian" who's books are required reading for theology. Christianity is under direct attack in public school and if you have any concern for your child's eternal destination, do not allow them to attend. Charter schools are opening up, whatever you have to do, protect your children!

Study history. It has always been that when cultures began sacrificing their children, God has said ENOUGH and nations were wiped out. We are sacrificing our children replacing wombs for tombs. And if we decide to bear them, we sacrifice them at the altars of public education.

Pray for your children, pray for our nation, pray for His mercy and pray He lead our troops. We are on the brink of destruction; God has made that clear in so many ways. Stay close to the LORD. As the rest of the nation is determined to steer this ship over a cliff, He will not forsake you. But take Him at His word. I fear there are so many of us who believe we are His and have no idea who He is.