Jen Shroder
Mom hangs up on Rasmussen and Rush

October 1, 2012
"Racist Homophobe! Racist Homophobe!" Mom has heard it all over the news. A pollster calls. A strange voice on the phone wants to know how she's going to vote. She glances at her children innocently playing in the background. The stranger is growing impatient. He has her phone number, does he have her address too? Memories of gay activists posting google maps to the homes of those who supported Prop 8 flood her mind. And what was the name of that black panther that campaigns to kill cracker babies? Shabazz something? 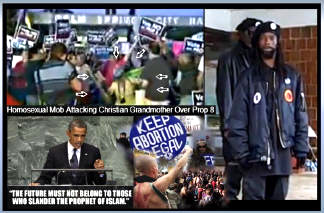 She remembers the video, A VIDEO, of voter intimidation, but Attorney General Eric Holder would not prosecute. He may as well have put up an "Open Season on whitey" poster, don't hesitate, no one will prosecute, no one. And why wasn't there a response to a bounty being put on the head of George Zimmerman? She remembers President Obama commenting on how Trayvon would look like his son...

Nothing happens to Shabazz or his statements of "You want freedom? You gonna have to kill some crackers! You gonna have to kill some of them babies!" But when a man posts a video about Mohammad, he's arrested in the middle of the night with 10 policemen, a shirt over his head, camera crew ready. It's confusing, because Hillary Clinton DEMANDED that taxpayers pay millions to the Brooklyn Museum while it featured "art" including the Virgin Mary covered in elephant dung and porn, and now she's claiming that she personally considers this video "disgusting and reprehensible" with a "deeply cynical purpose to denigrate a great religion and to provoke rage."

Well, duh, Hillary...you didn't catch that before? Maybe if the Brooklyn Museum needed millions of dollars to show the Mohammad video, you would have turned somersaults?

Meanwhile Obama is still reminding everyone at the United Nations that the video is the reason for Ambassador Stevens torture and death. Mom remembers looking at the Ambassador's picture...the blackened lips, the bashed out teeth...and we're apologizing? Torturing our Ambassador to death, killing our Navy Seals is not the problem, the problem is our freedom of speech and we must change our behavior?

Our own government supplies drug cartels with military grade weapons while demanding gun control on law abiding citizens. Holder and Janet Napolitano condemn Arizona's immigration laws without reading the half page legislation. Is this the government that mom can trust to protect her children from men like Shabazz? Will they arrest him or supply him with the bullets?

Meanwhile the U.S. Supreme Court will be deciding if they will hear the case about Prop. 8 on gay marriage. Despite what the media insists, the people have VOTED DOWN gay marriage time after time. Not once has it been voted in. We realized the target is our kids in public school. Once passed, gay activists will again demand to indoctrinate our children more than they already are and pastors will be forced to perform gay marriages or step down. Michael Swift's GAY MANIFESTO will come into fruition despite claims that it was written as a satire. It states that it's "an eruption of inner rage, on how the oppressed desperately dream of being the oppressor"...oh I feel so much better... If the US Supreme Court doesn't hear the case, gay marriage will once again be FORCED on us from the bench. May God have mercy on us.

The world has gone crazy and this man on the phone wants an answer. Mom can answer yes, she plans to vote for Mitt Romney and ammo up OR she can chicken out and answer that she's going to vote for the Marxist.

She hangs up. The pollster goes down his list until he finds someone that knows the politically correct and safe answer. Obama. Of course. Rush Limbaugh and Sean Hannity go ballistic.

Americans are courageous and intelligent. We're not going to risk putting our children in harm's way just so a stranger can manipulate our responses on a poll. We will wait and pray our voices can still be heard over the intentional voter fraud allowances. Rasmussen, Gallup, all polls are worthless. All attempts to use them are just more media attempts to manipulate the public and will probably cause chaos and destruction when things don't go as many expect.

Or will they? Because if we don't turn around, if we fail to see the darkness and depravity that we have become as our government prepares to impose these God-forsaken values on the world...then it won't matter who is in office.

I keep praying for a miracle, for a different option, because I see Obama and Romney as two sides of the same coin of big government. One states clearly that he's for abortion, gay marriage and a gay military as he wages war against Christianity and all things good. The other SAYS he's against abortion, etc., but his record shows the opposite and he's already sliding all over the map. It's like waking up in a nightmare, you can be out with a man that uses force, or another that claims he loves you but that's not what you heard walking by the locker room door.

I want a third option. Unless God provides an actual miracle, I can't have it, so at the last minute, I'll vote for the one who SAYS the right things and keep watching for a fast exit...

Hang up the phone but don't hang up on Nov. 6th. There are a growing number of saints falling on their knees in serious prayer. Inevitably we will have a one world system, the Bible says so, but we can still pray for mercy and more time. And if His answer is no, then let His peace be upon you, because Jesus Christ said that He told us these things that we not be troubled. (Mark 13)

Pray for our children, pray for our troops, pray for our nation but most importantly, know your Lord and Savior, Jesus Christ; that the love of the God of Abraham, Isaac and Jacob pour forth and shower you and yours through this storm ahead. Come, Lord Jesus, come.

One Million Moms, Ellen DeGeneres, the Gay Manifesto and Prop 8

RELATED: Feeling the Hate of Prop 8

Prop 8 justice: The people are too stupid to vote

The Rape of California