November 3, 2012
Rush Limbaugh quoted Dana Hogan, a pollster, asking if the Obama campaign thought she was stupid enough to believe the Republicans would stop abortion and limit birth control pills. (I am assuming she meant the "morning after" abortion pills). Rush's reaction was to shout to her through the radio that they DO think she is so stupid that she would believe Republicans would actually do that. 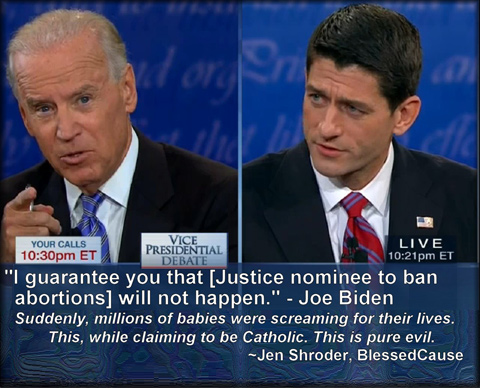 WHAT? I don't know about Dana, but I was stupid enough to believe the Republican party platform.

Dana Hogan asked, "Do I really think we're going to go back to the point where women won't be able to have abortions or birth control's going to get rationed? That's just silly, I don't believe any of that! Some women do still get really riled up by that but I think it's a scare tactic. Do you think women are that dumb?" And Rush yelled back emphatically, "WELL THE OBAMA CAMPAIGN DOES, YES!!! You need to know that, THE OBAMA CAMPAIGN DOES THINK YOU ARE THAT DUMB!" (Hear clip)

If it's dumb for Dana to believe the Republican platform, and one of the most popular conservative talk show hosts is shouting that the left seriously thinks she is actually THAT DUMB to believe it, then how DUPED am I? Apparently it's emphatically STUPID to think that the right might actually stop the butcher mills of infanticide. How many pro-lifers realize that Rush Limbaugh (and everyone in lockstep) think the idea of the Republican party actually stopping the shredding of the unborn is just a SCARE TACTIC from the left? It IS the platform!

Friends assure me that people are just saying things to get our candidate elected. In fact we all know not to believe everything candidates say, and sort of apply what we hope they mean (Obama's whole campaign last election). But if that's what we're banking on, then Romney's record is full of gay rights, gun control, abortion and evidence that he profited from aborted tissue. We applaud him for running the 2002 Olympics, but did you know that was the only time the Boy Scouts were restricted from participating? Romney has said in the past, "I think people recognize that I'm not a partisan Republican, that I'm someone who is moderate, and that my views are progressive," and has said he is, "going to do more for gay rights than Senator Kennedy." (Hear clips) Well he came through on that promise. Governor Romney was the one that instituted gay marriage in Massachusetts, illegally, according to MassResistance. Romney claims he has come to his senses in recent years, but his own campaign manager likens him to an etch-a-sketch.

I understand the reasoning of the right to vote for the lesser of two evils. When Joe Biden looked into the camera during his debate with Paul Ryan, shook his finger and guaranteed there would be no pro-life Justices nominated to the U.S. Supreme Court from Obama, it felt like a call to battle. There was something in his eyes that shot through my soul and it was as though millions of infants yet to be born were crying out for their lives. At that moment I would have voted for anyone to get Obama and Biden out of office. Then I heard Rush and added that to all of my other suspicions about Romney, Republicans and the right mainstream media. 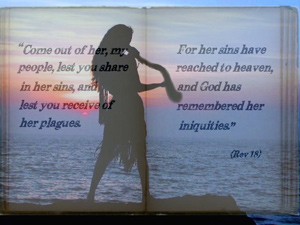 Putting Romney between Obama and the unborn isn't going to stop the slaughter, but most of us believe Romney is the only option so we stick with the Republicans and hope for the best. Meanwhile the Republican establishment in Washington is pouring enormous amounts of money to elect men like Richard Tisei, an "aggressive, anti-family homosexual activist" to Congress in other states. It is time to mass exodus the Republican party.

"Come out of her, my people, lest you share in her sins, and lest you receive of her plagues. For her sins have reached to heaven, and God has remembered her iniquities." (Rev 18)

We fear we cannot make a difference if we stand in a small crowd even though we are the majority. WHERE IS FAITH? God told Gideon to downsize his warriors to 300 to face a vast army, that all would know God's glory as victory was gained. IF WE refuse to stand apart for what we know is right, how will God use us?

We don't realize how much we matter even if we stand alone. Would it matter to Christ if you were the one dissenting voice in the back of the crowd, refusing to shout "Crucify Him!"? What if you shouted, "He is innocent!" He would go to the cross anyway, but would that mean that your voice wouldn't matter to Him? Would it matter if you went to your tent and prayed rather than dance around the golden calf as Moses sought God on Mt. Sinai? They still danced, Moses would still throw down the tablets and crash them to pieces, but does it matter to the hosts of heaven that you did not dance? Yes! As heaven watches, your voice, your single dissention matters! Your vote, your words will be recorded for all of eternity even if no one else hears them.

"But I say to you that for every idle word men may speak, they will give account of it in the day of judgment." Matthew 12:36

Heaven remembers. If you're a Christian, you have power and authority. Your vote, even if quietly laid down, carries a huge impact in the spiritual realm of right and wrong. Romney will be president if God wills; Obama will remain president if God wills; but what is important unto heaven is whether or not you stand up for what's right even as the cock crows, even if it has no impact on the outcome, even if no one else sees how you vote in the voting booth or even cares. God cares. God knows. God remembers.

Do you really want that record to show that you voted for the lesser of two evils? That you took what God gave you and used it in support of what was wrong because there was no chance for what was right? The battle belongs to God! He can throw down any leader at any time, he can have them split wide open and pour forth worms if He wills! If God's people combine what God has given them and support the lesser of two evils because they think they are too weak to stand as a small crowd against the many, how does God use that? He uses the little that we give Him and turns it into much...a jar of flour that never empties, a few loafs of bread and a couple of fish...God gives the increase. What HE does with it is up to Him. He is able and just, but we cower and look to join a large crowd. That crowd, the Republican party, is all about giving us lip service and then promoting the path of abortion, sodomy and big government. I'm leaving the Republicans and joining the Constitution Party and I am writing in Ron Paul. I do not believe Paul will win, but I will be one voice standing alone instead of part of a crowd doing evil.

If God has decided that the end times are here, then the end times are here; you cannot stop it any more than you can hold back the tides. But YOU stand for righteousness. LOOK at Romney's record. Do not compromise. Do NOT be responsible for the slaughter of the unborn. God records what YOU did in spite of what everyone else is doing. We have to step away at some point. And if you believe you must vote for Romney to stop Obama, at least get out of the Republican party, your presence is strengthening the evil they are perpetrating. Get out and have faith that God can move mountains and STAND.

I will not vote for Romney because I don't believe he will be any better than Obama. It has nothing to do with Mormonism, in fact I am grateful to the Mormons for their stand against Prop 8. The problem is Romney's record. But ultimately it is not our government, it is our people, our culture, and our government is only a reflection of it. We need to return to God. If we did, the rest would have fallen into place. The only message to you is when we crash, do not feel abandoned. We are like the Titanic about to hit the iceberg. When it happens, do not fear, just get in the life boat which is Jesus Christ. If you don't know Him, now is a really good time to start seeking. And if you already know Him, start helping others to find the boat as well. Atheists have been laughing at the catastrophes happening to the Bible belt. What they don't understand is judgment begins with the house of the LORD. The Bible indicates it's going to get much worse and as it does, what has been happening in the Bible belt will be a gentle storm compared to what is coming to San Francisco. Don't blame Obama or Romney, Republicans or Democrats, the Muslims or the Chinese or the Russians. As a culture, we brought this on ourselves. "Allah" is not helping the Muslims, rather the God of Abraham, Isaac and Jacob is withdrawing from us, as a nation. If you are born again, as we go through these hard times ahead, hang on to God and be at peace, because He will hang on to you. Thank God!