May 19, 2009
Norma McCorvey, the notorious "Roe" in the landmark Supreme Court case "Roe v Wade," has been arrested. The plaintiff in the case that made abortion legal in the United States later became adamantly pro-life and in 1995 began a crusade to overturn the law she helped create. This fact has largely gone unreported by the mass media due to national security concerns. McCorvey was taken into custody today without a struggle after brazenly trespassing on the hallowed grounds of Notre Dame University to protest the pending visit of His Eminence, the pro-abortion President Barack Obama. 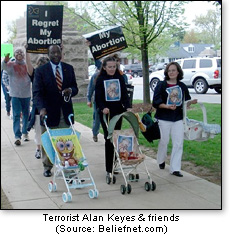 "What is the world coming to?" exclaimed an outraged Rev. John I. Jenkins, Notre Dame President. "This is unprecedented! How dare they challenge my moderate, progressive edicts? Who do they think they are, alumni or something? When oh when will these fanatic Catholics ever leave us alone?" he lamented.

"The Messi... I mean, President Obama will be here any minute," Fr. Jenkins squealed. "We can't have domestic terrorists running around on our campus threatening His Worship's aesthetic vista with signs like: 'God Weeps for the Babies,' or 'Notre Dame Cancel Obama,' or the hurtful 'Notre Dame Spiritual Sellout!' which I have to tell you, cuts me right to the bone. The inhumanity! These aggressive acts reveal the brutal nature of these radical right-wing thugs!"

One of Fr. Jenkins' personal staff  whose name Notre Dame refuses to release  objected that it was an article of Catholic faith to oppose abortion. "But Father Jenkins," he was heard to plea; "Didn't the Conference of Bishops say that 'Catholic institutions should not honor those who act in defiance of our fundamental moral principles?'" 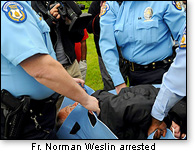 "Well who the Hell do they think they are anyway, the Pope?" Jenkins exploded. I am a moderate! I am not dogmatic! I am NOT dogmatic!" he screamed. "My worldview is not limited by Catholic philosophy," he shouted proudly and without irony. "I am that rare breed of Catholic who is liberal, open-minded, charitable and not hamstrung by tradition, unlike those retrograde scum out there trying to ruin my plans!"

Sputtering uncontrollably, eyes bulging wildly, he roared: "Furthermore YOU'RE FIRED! I refuse to be swayed by such radical distortions of the Church's teachings! Real Catholics would be well advised to follow my noble lead and get with the program!"

All the arrests really did happen, though, including Norma McCorvey's (but she wasn't wielding a CAR-15), and Fr. Jenkins really did vigorously defend his decision under the guise of "positive engagement." 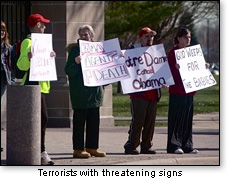 But a peek just a little deeper into this controversy suggests other things at work. First of all, it is a disgrace that Notre Dame should choose to arrest peaceful protesters simply because they were "trespassing." What was the real message? The message I got was that this Notre Dame administration was unwilling to brook any opposition. So who were the real thugs?

But more to the point is the willingness of this school president to break with sacred Catholic tenets (whether you agree with them or not) to the point where his action may threaten the very viability of the school. As of May 13, the Catholic News Agency reports that Notre Dame Alumni have already promised to withhold $14 million in donations unless Jenkins is replaced by someone who "is committed to the authentic identity of Notre Dame, grounded in the teachings of the Catholic Church."

Why would someone charged with the responsibility of maintaining both the traditional Catholic heritage and the financial soundness of a storied university like Notre Dame do such a thing?

Father Jenkins received a Masters of Divinity from the Jesuit School of Theology at Berkeley, California. If it is anything like its secular sister a few blocks down the street, then the teaching staff is likely saturated with Frankfurt School proponents. Indeed, on the "Our Faith" page of their website, a testimonial in the sidebar says:

Hours of conversation, study, and prayer with my peers in ministry taught me that we want the Catholic community to lead the work of creating a just society," says Claire Noonan (M.Div. '00). The Program Organizer for Social Justice and Next Generation at Call to Action in Chicago, she creates educational programs and sustained action campaigns focusing on sweatshop labor.

Oh, brother, there's that word "Chicago" again. Now, in my mind "social justice" has always been a codeword for Marxism, or in this case, the ecclesiastical equivalent, "Liberation Theology." Of course many Jesuits have been unfortunately drawn into that false ministry. But where is any reference to Catholic, or even biblical teachings? The Jesuit School at Berkeley is a member of the Graduate Theological Union, which has many ties to the Frankfurt School. Jenkins also attended Oxford University. Oxford has been penetrated by the Frankfurt philosophy as well.

As some of you doubtless know, the Frankfurt School was founded by communists shortly after the Bolshevik coup in Russia, and is dedicated to destruction of the West by cultural corruption. Willi Munzenburg, one of the school's founders, put it bluntly. The school's curriculum was designed to:

organise the intellectuals and use them to make Western civilisation stink. Only then, after they have corrupted all its values and made life impossible, can we impose the dictatorship of the proletariat.

David R. Carlin, author of "The Decline and Fall of the Catholic Church in America," writes:

The pro-abortion movement has from the beginning wrapped itself in the mantle of "women's rights." But the fact of the matter is that in the abortion issue, the radical Left saw a rare opportunity to split our society right down the middle, with the unstated goal of obliterating the moral principles that in the final analysis are our only non-violent defense against the designs of the communists. And they have been wildly successful. I do not believe there is a more divisive issue on today's political landscape, and the Left relentlessly rubs salt in the wound.

In his commencement address, Obama called for "open hearts, open minds, fair-minded words" in looking for "common ground." But who has really been closed-minded here? Since 1973, the American public has been treated to a hateful propaganda blizzard vilifying pro-life citizens as Nazis who deny women's "rights," the non-existent "right to privacy" manufactured out of whole cloth by activist judges, and ever-more-radical legislation grounded in these flawed rulings.

Promises of restraint in the abortion industry have been followed by ever-more-extreme practices, including partial birth abortion (which early proponents claimed would never occur), to the point where today we are treated to a President who even supports killing children born alive after a failed abortion.

Do you honestly expect Obama to moderate his views at all? So do not be misled by his conciliatory tone! This deceptive talk is the one thing in which he excels  or at least in which his teleprompter excels.

The fetus, according to a Marxist, becomes a person when he is judged as such by "someone of higher wisdom." The humanity of the fetus depends upon how the mother perceives the "social relationship" that exists between them. If the mother desires to keep the baby, then she "fantasizes" it into becoming a human being. But, if she does not want the pregnancy, "it is something else entirely." Her opinion of the fetus thereby denies it of personhood.

Totalitarian control over our lives is the logical endpoint of this kind of "situational morality," and some Vatican intellectuals have argued Obama is leading us there.

Whatever Jenkins' reason for inviting Obama, I have little doubt about Obama's true motivation. Barack Obama, as I have extensively documented elsewhere, is a hardcore, doctrinaire communist. Conservative Catholics, Christians and other Americans committed to the sanctity of human life  i.e. the pro-life crowd  are some of the most principled and dedicated opponents of Obama's radical designs. What better way to disrupt, demoralize and divide that formidable group, and indeed the entire country, than to strike at the heart of this cherished bedrock Catholic institution?

That the President of Notre Dame, in a disgustingly servile, supplicating manner, singled out one of the most extreme pro-abortion politicians in America for an honorary degree, while ignoring his ecclesiastical peers, a large body of the Notre Dame community, and even countenancing the arrest of harmless protesters, is a huge insult to Catholics everywhere and indeed a disgrace to all Americans. I believe it was deliberate.

The cultural Marxists are rejoicing today.