Do your part to impeach and remove Obama

April 3, 2014
As Americans await the most devastating years  still to come  of Barack Obama's presidency, many are resigned to what seems inevitable, bringing to mind the final lines of T.S. Elliot's poem The Hollow Men:


I encounter such defeatism everywhere I go as I talk to people about the cunning, treacherous usurper in the White House.

Even the president's most vocal critics seem content merely to vent token resistance unbacked by serious action — from the leadership of the Republican Party in DC on down to the strangers we engage at Walmart.

The malaise suggests a nation that has too long given in, and that now appears on the verge of giving up. Only a relative few of those professing to oppose Obama seem willing to DO anything to stop him. Nearly all others appear overcome by fatalism, having lost hope of countering his deeply entrenched agenda. 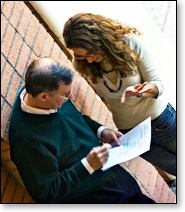 The most crippling response is that evidenced by people who apparently expect others to step up and do something.

Not appreciating that America is a constitutional republic that gives THE PEOPLE the ultimate say in our nation's governance, too many are willing to turn the future of our country over to those more "politically active," allowing them to control the options available to the rest of us who are unduly preoccupied with our day-to-day lives.

Yet, the self-evident basis of our country is (and always has been) that God expects all of us — every citizen — to do our duty to get involved and steer the political process toward constitutionally-secure, divinely-ordained liberty. To "rely upon others" to do what we ourselves are commissioned by God to do is folly. On the scale we see playing out all around us, such dereliction  unless citizens awaken to their duty  will guarantee the ultimate loss of our fundamental freedoms, and with them, the loss of our nation itself.

That is what we are up against in the current battle for our very survival as a civilized nation: many of us talk, or protest, or complain — but only a relative handful have the courage to stand up against the treasonous designs of Mr. Obama.

And what is it that the American citizenry must do to save our country at this late stage in its ever more precarious existence?

The God-inspired Constitution puts it plainly:

"The President, Vice President and all civil officers of the United States, shall be removed from office on impeachment for, and conviction of, treason, bribery, or other high crimes and misdemeanors." (Art. 2, Sec. 4)

To the extent there is credible evidence that President Obama, Vice President Biden, and their chief enablers (such as Eric Holder) are guilty of treasonous, criminal, fraudulent, or seriously derelict behavior — particularly in ways that violate their solemn oath to uphold and defend the Constitution — they MUST be impeached (with intent to remove), a faithful reading of the Constitution says.

We are duty-bound to follow that directive if we intend to honor the Constitution.

Failure to take such action imperils the very continuance of our nation. To a free people — or at least one that intends to be free — there can be no other recourse in the face of impeachable offenses by such high public officials.

Any other action short of impeachment will prove ill-advised, even disastrous — forestalling or preventing the only constitutionally-prescribed remedy to impeachable offenses. Appeals to the courts will ultimately fail, even if they technically succeed "legally." The courts have no power to enforce their decisions  enforcement being solely the discretion of the executive branch; and a sitting president "convicted" by a court is empowered by the Constitution to pardon himself and any errant collaborators. (See Art. 2, Sec. 2.) 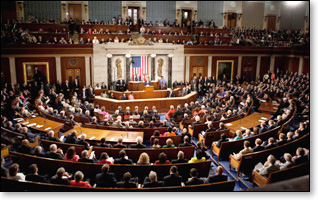 The only reasonable recourse in the face of impeachable offenses is appeal to Congress — that is, impeachment.

Unfortunately, the current Congress has proven itself too much in league with the president and his henchmen to file articles of impeachment and follow through to removal. That's true not just of Democrats, but of those who dominate the GOP in Washington, DC.

Thus, impeachment — much as it is warranted, needed, even demanded — will "never happen," we are told by those who accept, on face value, the clever lies of those who facilitate and protect Mr. Obama.

As things stand, of course, the naysayers are right: The current Obama-accommodating Congress will never impeach, so it's pointless to try RIGHT NOW. Thankfully, we're in the early phase of the 2014 midterm election, and we have the opportunity to clean out the enablers and chameleons, and replace them with genuine conservatives who are willing to do their duty under the Constitution to impeach.

The solution, therefore, is not to give in to the sophistry of Obama-defending naysayers, but to do all we can this year to elect an "impeachment Congress."

A matter of sacred oath

Fortunately, the oath of office every member of the House and Senate is required to take provides a clear, simple standard for assessing those candidates who are worthy of our vote, and those who are not, as we seek to elect an impeachment Congress.

That's because, to fulfill their oath, members of Congress are obligated to impeach and remove any lawless, seriously harmful officers of the federal government such as Obama, Biden, and their associates.

The House and Senate oath states:


I do solemnly swear (or affirm) that I will support and defend the Constitution of the United States against all enemies, foreign and domestic; that I will bear true faith and allegiance to the same; that I take this obligation freely, without any mental reservation or purpose of evasion; and that I will well and faithfully discharge the duties of the office on which I am about to enter. So help me God.


The clear focus of the oath is on supporting and defending "the Constitution of the United States against all enemies, foreign and domestic." Any professing conservative should be fully aware that Barack Obama and his associates in crime have behaved as enemies of the Constitution and of our nation itself, and thus warrant impeachment and removal, upon due process and the presentation of valid evidence. 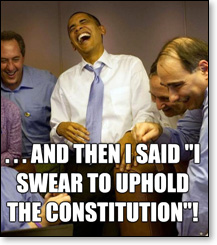 The president and his cohorts have repeatedly and demonstrably engaged in actions, cover-ups, and deliberate designs that are antithetical to the foundations of our republic — as well as destructive of our God-centered, family-oriented, moral-based values, without which our nation cannot survive in liberty — and this fact is not lost on any true conservative at this critical time in America's history. Initiation of the process of impeachment is thus fully appropriate, and urgently needed, once we've sent to Washington enough oath-honoring representatives.

The oath of office is the centerpiece of any grassroots effort to assemble an "impeachment Congress." Only those candidates who publicly affirm that they will uphold their oath, no matter the powerful temptation to give in to Obama's protestations, deserve our vote  and every conservative voter should commit to support only such oath-affirming candidates.

If any candidate or voter this election is uncertain whether Obama and company do in fact deserve impeachment and removal, it's time for them to get informed. A good place to start is "The Case for Impeaching Barack Hussein Obama" in both long form and short form at PledgeToImpeach.com.

Regarding the feasibility of impeachment (and removal), bear in mind that the impeachment process itself was designed by the founders as a "NATIONAL INQUEST" to publicly expose provable wrongdoing by those heretofore insulated from accountability by their lies and deception. Impeaching Obama, Biden, and their inner circle will — for the first time — let all of America know (not just informed conservatives) the extent of these public officials' deceit, treachery, and treasonous behavior, in open, unimpeded hearings.

The result will be either outright removal of those indicted, or such devastating discrediting of the president that his agenda will be stopped cold, as the general citizenry rise up and refuse to go along. Initiating impeachment, competently trying the accused, and exposing their extreme mischief and anti-Americanism will bring the Obama administration to an abrupt halt — as America itself says "No!"

If actual removal does in fact occur, all the better, but just impeachment at the hands of principled conservatives can be expected to put an end to the Obama presidency, once it is fully exposed. The only reason Obama has any influence at all is he has been insulated from public scrutiny by a protective media. An unimpeded INQUEST would end all that.

This brings us to the main point of this discussion of impeachment and removal.

The "constitutional remedy" outlined above will ONLY happen if enough grassroots voters demand it of House and Senate candidates in 2014. Sign and share the Voter Pledge that commits you to acknowledge this reality, and then take action to persuade good candidates to sign the Candidate Pledge, which affirms candidates' commitment to their solemn oath of office. 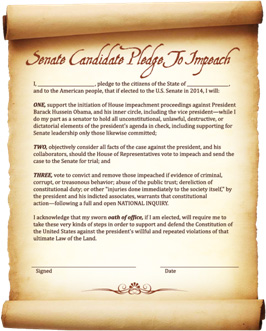 Get involved. Our country is counting on you to do your part to impeach and remove this lawless president and his complicit comrades.

A footnote about Speaker Boehner

Many voters assume that impeaching and removing Obama and Biden will leave the presidency of the United States in the hands of one of their most notorious enablers: Speaker of the House John Boehner of Ohio. Not if things are done right!

The first order of business for an impeachment Congress is to replace Speaker Boehner with a strong, principled, oath-honoring conservative — one capable of presiding over our crippled nation and helping it recover from the Obama legacy. That person, according to the Constitution, does not even need to be a sitting congressman, but can be anyone qualified to lead. There are many who qualify. That choice will be up to the "impeachment Congress."