December 27, 2013
This article is essay review of my father's March 2012 Socratic dialogue titled, Symposium: The Damnation of Ideas (Part I & II). Here we will address Part I (Books 6-10). In this epic two-part saga the writer begins by putting the renowned philosopher Socrates in historical context as the narrator and omniscient judge-figure of the Symposium in Athens which is where he taught philosophy in the fourth century B.C. Socrates taught such philosophical giants as Aristophanes, Plato, Aristotle by using the method of teaching by leading in questions. His probing, sometimes even humiliating questions are directed to get at the cut of the issue while bypassing political or sophistic argumentation while the Socratic dialogue always stands for VERITAS (Truth). 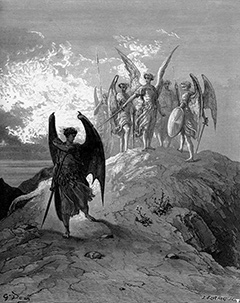 Socrates begins his dialogue by stating what will be discussed through the ultimate question: What is the difference between ideas that uplifts society and those that damn society? He references 10 books which history has demonstrated either damned society or uplifted it. Starting with No. 10 by British economist, J.M. Keynes who wrote The General Theory of Employment, Interest and Money. This foul book fueled the ideas of the world wide socialists' nations beginning in his native England, spreading throughout Europe into China, Russia, South America, America, etc...) and inspired the dual insanity of socialist economics and Leviathan Big Government control over the economy and the diminishment of free-market capitalism.

Keynes believes in constant government money borrowing, especially during the severe economic slowdowns during his time in the late 1920s and 1930 (i.e., the Great Depression). Socrates cuts in by noticing the Keynesian socialist policies that FDR followed, both of these men are even living in the same time period. Fast forward 80 years to President Obama, yet another dupe under Keynes ideas who has single handedly sent America into a debt of over $4 trillion in his term alone totaling a national deficit of $17 trillion dollars (more than the previous 43 presidents combined!!)

Next comes book 9 by the German philosopher Friedrich Nietzsche who believes that everyone has their own will which can be enabled to gain power for himself and surpass God. He called this philosophy "Will to Power." Nietzsche was an atheist whose greatest book, "Beyond Good and Evil" (1886) proposed the blasphemous "God is dead" idea. His belief was that Christianity was for the weak minded ("slave morality") and can be trampled by strong superior individuals (believing himself to be one). Socrates challenges Nietzsche's ideas which he conceded were brilliant, yet history shows that they imposed nothing but insanity and cruelty to humanity. Of course these ideas reached the bowels of Germanic belief leaving the dictator Hitler unbound, killing countless innocent Jews and initiating the crisis of World War II. Ironically, the man who gave the world Ubermenchen (Superman) would be found mentally enfeebled late in his life. Thus Nietzsche met a horrible end himself, enduring an11-year Sisyphus-like existence; rotting in his own evil intent.. the pitiful victim of his diabolical ideas from 1889 to his death in 1900.

Next we have book 8 by the French Philosopher Auguste Comte who abandoned a wealthy prosperous life and comes from a Royalist Catholic family whom survived the French Revolution. His opinions and thoughts are contained in his 1830 book: The Course of Positive Philosophy. He like many other scientific superficial cronies believes that it is natural to worship the Lord, but "to believe in history through science is above Christ." He believes humans to have evolved past natural thought and developed "metaphysics" which is defined as understanding everything without the Bible.

In book 7 by Jean-Paul Sartre wrote his most important writing on philosophy titled, Being and Nothingness. This book contains many paths toward non-existence thus portrays an existential, meaningless lifestyle which glorifies futility. Sartre believes that we created ourselves, we are born from our actions and we are responsible for anything we individually caused which is summarized in one of his famous aphorisms – "The destiny of man is placed within himself." Socrates then takes the stand by reminding us that it was Barack Obama (echoing Sartre) who arrogantly shouted that "We are the people we have been waiting for."

Socrates next confronts in book 6. Karl Marx who wrote "Das Kapital" in 1867. Marx believes capitalism to be an exceptional lie behind labor, exploiting it and disgusted by it. His sole view and purpose in life was based on his materialistic theory of history which he violently confused many modern day leaders and people. Throughout Das Kapital Marx slanders the business owner (bourgeoisie) and capitalism by perverting its true meaning and effect while deifying the worker (proletariat) and the communist idea of abolishing all private property and land ownership. Socrates asks the reader how do each of these books relate to anti-intellectual thinking today? Socrates finds that these 5 books and the heretical ideas they promote all stand against the morals of God and focus the attention on us humans, believing that we cause our own nature, our own existence, our own capabilities and even our own creation. But one thing most readers carelessly miss when reading all these books is that they all follow Darwin's preposterous beliefs on evolution – that natural forces, not God, created all living things including mankind.

My fellow readers, notice the beautiful etching of Lucifer's descend from heaven by Gustave Doré; who else except for the king of hatred, the father of lies and of evil and cowardice to cause all of this anti-intellectual madness that has historically done such great harm to society. These 5 books by writers like Comte, Marx, Nietzsche, Keynes and Sartre have created and furthered a demonic purpose for who have changed the truth of God as the creator of man and all things to the secular humanist Big Lie – Man is the measure of all things.

Will America continue to deify fascism, socialism and totalitarianism contained in these 5 books, or will we through repentance, faith and reason find freedom, natural law, justice, morality in God?

This is the ultimate dialectic question my father's essay on The Damnation of Ideas speaks about and the answer is that nothing but truth and justice shall ultimately prevail no matter how popular these authors and the pagan ideas they propagated become. In part one of this two part epic people will begin to find connections in their choice of belief and question the statements by the 10 authors who have damned America's well-being. It truly is sad that we have allowed ourselves to even consider any of these false prophets and their dangerous ideas that over the centuries have damaged families, damned American society and created human bondage against Christ and the Bible which is the standard of all Veritas (truth).

At Socrates' next Symposium we will unravel the twisted factors the final five books and how they have deconstructed American society, Western Civilization and destroyed the world. Until then have a Merry Christmas, and a happy New Year!