Stone Washington
Is America still Brave... or have we become a New World? 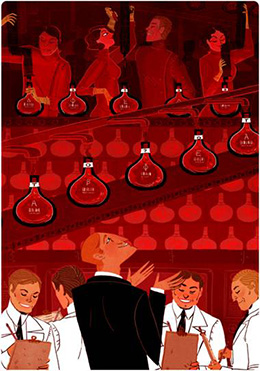 "But I don't want comfort. I want God, I want poetry, I want real danger, I want freedom, I want goodness. I want sin."

Aldous Huxley (1894-1963), an English writer, humanist, atheist, and a prominent member of the Huxley family, grandson to Thomas Huxley (1825-95), who was also called "Darwin's bulldog" because of his fanatical devotion and propagation of Darwin's theory of evolution, wrote his dystopian classic, Brave New World in 1932 (the year before Hitler came to power); a book that like George Orwell's two famous apocalyptic novels, Animal Farm and 1984, proposed stark narratives which put recent tragic events of the past (e.g., WW I and WW II) into a futuristic, atheistic paradigm where the State is the new god and is not checked by moral or religious considerations. Aldous Huxley made this blunt admission about his anti-theistic motivation:


I had motive for not wanting the world to have a meaning; consequently assumed that it had none, and was able without any difficulty to find satisfying reasons for this assumption. The philosopher who finds no meaning in the world is not concerned exclusively with a problem in pure metaphysics, he is also concerned to prove that there is no valid reason why he personally should not do as he wants to do, or why his friends should not seize political power and govern in the way that they find most advantageous to themselves. ... For myself, the philosophy of meaninglessness was essentially an instrument of liberation, sexual and political.


This bleak, dystopian classic begins with the devastating "Nine Year's War" brought an end to the modern civilization. A mysterious man known as the Director introduces the new year of 632 after Ford, and a new society arises from the ashes of war called the Brave New World, a glorified utopia where all greed, poverty, pain, disease and war will finally be abolished. The leaders of this new society are proud and impressed by their success, but the citizens of the Brave New World are demoralized, hopless and miserable, they live by one motto: "Community, Identity, and Stability." The head of this society is Mustapha Mond, one of ten of the World Controllers whose characteristics and identity is unknown to all other citizens. Despite this, what is known is that he is a tall, evil and an irrational man who extracts humans hatched from eggs and mass produces them in bottles using a variety of methods such as the Bokanovsky process of human cloning (see picture above).

A worker named Henry teaches interested people about the assembly line of birth and on how a baby is matured throughout its life. The chemical solution involved a concoction of the individual's DNA whereby these utopians would decide what kind of person he or she will become in society – Alphas, the leaders of the world, Betas, Gammas, Deltas, or Epsilons, the latter being "mindless" working slaves. The students are very curious and always ask about the age of Henry Ford auto industry, a time when women birthed babies from their stomach? Henry became so irritated of those questions that he ignores them. Mestapha Mond, in an imperious manner, watched over several hundred naked boys and girls play elaborate sex games in a dome; perceiving happiness from this perversion which is a venal invasion of privacy. Mond poisoned the minds of learners by reminding them of the old days before the Great War where people had stronger emotional ties through parent-oriented families and society, unlike our present utopian world, was unstable, inefficient and dangerous.

Throughout this Brave New World various cities and buildings have been demolished in the past in order for a large dome to be placed over this new utopian city. A woman named Leina and a certain man, Bernard Marx, of who seeks individuality apart from the mindless slavish citizens, containing "forbidden" emotions such as love, journeys to a secret Indian vacation reservation and meets a man named John along with his mom and a man named Toiken who are from the Brave New World. Leina tutors John, showing him how to read, write and even study Shakespeare. John admired Shakespeare so much he believed him to be a god (his favorite work being Hamlet). Soon the Directory discovers Bernard's unorthodox behavior and denounces him as a "subverter of all Order and Stability" but John and his mother counter this by declaring the head of the Directory, Tomakin, to be his father, thus causing him to resign from his position in humiliation. John and Linda return to the New World with John disobeying rules and failing to corporate in multiple activities. From this intolerable behavior they address John as "the Savage."

Later John proposes to Linda in marriage, but is denied as Linda explains how everyone belongs to everybody in society; that individuality, freedom, liberty are dead concepts. As they make love John stops Linda and explains how this type of thinking is dangerous and that they will be punished for these actions. Linda soon dies from a stimulant drug overdose, routinely issued by the government toward citizens to invoke pleasure, causing John to wildly throw cases of the drug out the window in a heated rage over the death of his lover, Linda.

After being captured for this incident, John and Bernard are face to face with Mustapha Mond who interrogates them while at the same time defending the social and political structure of the Brave New World explaining how everyone is happy and that the world is stable under a caste system – which a form of social stratification characterized by endogamy (marrying within a specific ethnic group), social relations and prohibitions based on cultural ideas of purity and pollution. However, John retaliates to this social slavery by explaining how to be human means to have ones' own free will and desires. He argues for a world which contains all the natural impurities of the old world such as, pain, suffering, anxiety and misery- conditions that were banished in place of a utilitarian, sterile society. Afterwards Mustapha directly attacks John's philosophy and sends out guards which hunt him down in the streets. After escaping the guards, John settles down in a secluded house far away from the Brave New World. Later on in the story John's solitude is interrupted by media attraction from an above helicopter along with other citizens gathering around John's house. In a tragic ending after days of being laughed at by people and transfixed by guilt over losing Linda, John succumbs to anguish and hangs himself, knowing that he would never remain happy in a society which does not understand him; a society that so brutally represses free will, human emotion and individual thought.

Is our modern age so different from the societal disorder of the dystopian era within the Brave New World? It is implied that various key characters are symbolized through famous socialist, communist leaders in history such as Bernard Marx (reflecting Marxist socialism). But the most famous symbolism in Huxley's work is the current Communist methods across the globe specifically through the Progressives in America. Another connection to our own times in the Brave New World is Bokanovsky process of human baby extraction and incubation both in its imitate details and in the grotesque corollary to China's One Child policy, due to both forcefully controlling and limiting the growth of their populations.

The secrecy and dominion of the Brave New World means that no one is aware of the hierarchy directing their lives, placing all individuals under a continuous, emotionless spiral of decadence. This example, in a grotesque way reminds me of the infamous Soviet tactics of disinformation where oppressive governments afraid to lose their totalitarian power over the masses use surreptitious cover-up techniques and tactical propaganda to sway the minds of the people away from secret government actions, keeping them all collectively ignorant and hyper-suspicious of their neighbors.

Don't these Machiavellian ends/means tactics sound eerily familiar to those we are living under in America today? For example, the Obama administration last year concealed the unlawful spying of the NSA on all electronic communications by every American; also the Obama administration's use of the IRS to audit, and to punish Tea Party, conservative, Christian, patriotic and Jewish groups seeking 501(C)(4) non-profit status. All this is in direct violation of the First Amendment constitutional guarantees of freedom of speech, association and expression. 40 years ago the Left created the "Nixonian Era" to denote fascist tactics similar to Obama used by a Republican president to silence his enemies, however, since Obama is a socialist and allied with the media, all we hear today is silence, obfuscation or rationalization by the propaganda press. Truth is irrelevant to the State-controlled media proving Huxley's quote, "Great is truth, but still greater, from a practical point of view, is silence about truth".

Just as the Brave New World seeks to break the human will and kill individual spirit and shape it according to their evil motives, America is becoming ever more perverted through Groupthink and the rise of liberal-fascism and statism where natural law and the natural rights of man are manipulated or destroyed, and notions of privacy and private property are discarded as belonging to a dead, bygone era of the past. Now the STATE is god and the Constitution and the Declaration of Independence is DEAD.

The critical question for all freedom-loving Americans today is this: How long will you succumb to a daily existence where hedonism and pleasure dictate your thoughts and define your existence within the walls of this dystopian, modern slavish society where government power grows exponentially, leaving fewer and fewer rights and freedoms to We the People? Is America becoming, or is she already the same as Huxley's Brave New World? Are most citizens too unaware or ignorant to realize that we are slaves to Socialism, which over the past 150 years has now been renamed under the beguiling façade of "Liberal" and now "Progressive"?