June 25, 2010
Way back in September, 2008, I read an excellent interview with Ángel Lafuente, "Profesor de Técnicas Verbales" ... Professor of Speechifying. Simply put, he teaches oratory arts. And what an amazing person he is, sharp as a tack, and excellent in his vocation. During the interview he was asked;

¿Cómo distingue a un orador de un charlatán? ... How can you distinguish between an orator and a charlatan? ..

"That's very easy," he replied, "The techniques for holding someones attention are fundamental as regards verbal communications. If you can't hold the subject's attention, then what's the point of speaking? You must view your audience as hungry and astute lions. Either you feed them intellectually or they'll eat you. By intellectual content, I'm not referring to philosophy; it may be a vacation, or a problem with a sick family member, etc. The audience care not for empty words or interminable lists of synonyms, things much used by teachers and politicians."

Ángel mentions during this interview that the worst orators he's ever encountered are in fact politicians. I happen to strongly share that view. If you read good Spanish the Lafuente interview comes highly recommended. It ain't too often in life that someone of this caliber freely shares his knowledge and experience.

He's right of course, politicians are indeed the worst orators, because they're not sharing their thoughts, they're regurgitating hackneyed political rhetoric. When they do that, using meaningless, worthless, and redundant phrases, such as "sustainable economy," "renewable energies," "climate change," etc, Ángel regards them not as orators, but charlatans.

Strangely enough, the Lafuente interview was published exclusively in a magazine called "Consumer Eroski," a free monthly magazine available at any Eroski supermarket throughout Spain. I'm losing count of those Spaniards who tell me they never shop at Eroski because the company funds the terrorist group ETA. To this day no one's offered any proof, and neither can I find it. The point is that whether they do or not is none of my business, it should be of interest to the security services though, and they ain't interested, which is fine by me, for Eroski happens to be a top class supermarket chain, and the only one to print everything on the labels of products. So if I do or don't want trans fats, the decision's mine due to that label, and that's all she wrote. The ultimate consumer choice; everything labeled, everything available, and I alone choose whether or not I want it.

I don't own shares in Eroski, though it might be a good idea. As a shareholder you have certain privileges that others do not enjoy. It's all part of the free market philosophy. You like a company enough you may invest in it and help steer it in a positive direction. With Eroski, as a non-shareholder, the steering is left to others. That's my universal business viewpoint, lifelong and unchangeable. Market forces and company owners and investors forge their entities form and direction in the market place.

And here stands a prime space to include my thoughts on Google, since I've heard quite a few Conservative writers grievances with this company.

My viewpoint is a little different. It's the same as the one above. I don't own shares in the company, and therefore have no hand to play in their organization. Do they block me in any way, shape, or form? I don't know. But hey, I don't care either. It's their company, their business, the fact I'm there at all in any way, shape, or form, is by their behest, and being someone constantly thankful for small mercies, that's good enough for me.

But should they block me one hundred percent tomorrow for time immemorial, tough luck dude, you won't find me grieving about it. If they lean Leftward, why should they include me in their portfolio at all? And why should anyone or any non-participating entity believe they have a say in the direction another's property should travel, and the form it takes? Why should someone strongly against firearms have any say in the running of an arms manufacturer? Possibly damaging a company's profits to the detriment of its workers, owners, and shareholders. It's that simple. If we don't invest in the game, we don't figure in the play.

Laissez-faire capitalism is all about business regulating itself. A self-regulating sphere in an ever-changing business cosmos. Makes it sound exciting, right? putting it this way, as indeed it is. Or was, until political charlatans began to interfere.

The fact that politicians nowadays regard themselves as exempt from the above formula, and able to interfere in the running of sovereign companies, with the excuse that its all for our own good, is the saddest thing of all. Try to imagine, say, a solar power company presenting an advertising campaign, claiming that world oil extraction will peak by 2014-16, and dry up in a few decades. And further imagine that this campaign will not place them in a court of law. Their peak oil claim would be challenged, and evidence would have to be forthcoming. Unfortunately for them, yet fortunately for us and our oil shares, NO evidence is to be had. It doesn't exist. It's simply a damned lie.

Should an air-conditioning manufacturer advise the so-called consumer to forget about buying that new central heating system, to instead invest in a cool system, because the earth will be baking hot in just a few years, they'd be in trouble also. Justifiably so. For, yet again, it's a damned lie. Yet politicians daily present those very lies, with no genuine scientific evidence, and hardly anyone bats an eyelid, even though their proposed solutions to fictional problems of the lying sort, burn out huge amounts of tax dollars, and bear down on business performance and freedoms.

Why should the lying interference of politicians be viewed as legitimate? And the lies of private entities court-worthy? Possibly we common folks, namely the Joe and Josephine Publics, view political lies as inevitable and acceptable, when in fact they're not. 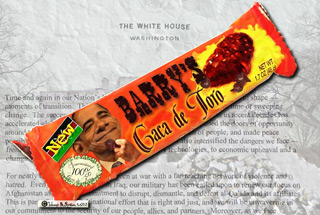 After burrowing through the prevarications of Barry White House, encased in his latest duck-ument "National Security Strategy. May 2010," Profesor Ángel Lafuente's views became all the more poignant, as regards political charlatans. Lies and rhetoric and interminable lists of synonyms were all there is to be had within the duck-ument, the ducking-the-facts lying rhetoric document.

I was particularly interested in part of his opening letter. On page 5 he makes mention of wars abroad and American casualties. No lies there it has to be said. But it must also be said that many of us pay tribute to the fallen every year, whereas he doesn't. Maybe that's why on page 5, he let something slip, in reference to fallen Americans, when he said, and I quote;

"We have also created webs of commerce, supported an international architecture of laws and institutions, and spilled American blood in foreign lands ..."

Here's where we address some dark issues, and embrace the subject of non-military background ... political yack-bags and their supposed right to head the military. The war with Spain, the First and Second World Wars, Korea, Nam, Iraq, Afghanistan, etc, are bathed in a new political light with the above statement. Now I'm fully aware of the difference between professional fighting men and draftees, that being said, one can hardly blame America for fallen Americans fighting against the Spanish, the Germans, the Japanese, Koreans, Iraqi insurgents, or the Taliban.

The enemy took their toll and America lost some of its greatest. Yet Barry rewrites history, having America blame itself for the blood of its fallen, and therefore declaring the enemy innocent by inference. It's an interesting scenario all the same should we turn the thing around and aim it at others. Lets see how it goes;

The Taliban spilled the blood of Afghan civilians, even though Americans pulled the trigger by accident. And six million Jews died by their own hand in WW2, while the Third Reich helplessly looked on. America itself spilled Americans blood at Pearl Harbor while the Japanese weren't looking.

That's what Barry's inferring in the introduction to the above-mentioned duck-ument. I must admit that after reading that part I felt like throwing the thing away, but I plodded on and read ...

"Climate Change: The danger from climate change is real, urgent, and severe. The change wrought by a warming planet will lead to new conflicts over refugees and resources; new suffering from drought and famine; catastrophic natural disasters; and the degradation of land across the globe. The United States will therefore confront climate change based upon clear guidance from the science," 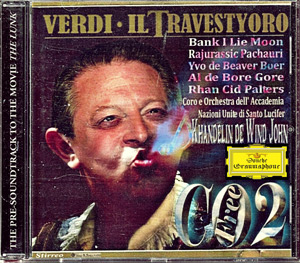 Please note that Barry is not only a wimp at the White House, he's also an imbecile, because he's never heard of the word "anthropogenic," nowadays commonly regarded as man-made. Nowhere within the duck-ument's 60 pages does "anthropogenic" appear, just global warming and climate change. Why doesn't he say man-made? And what does he mean by "clear guidance from the science"? What science? The IPCC? Lying science? The Mann hockey stick? Or a plethora of genuine scientific observations that clearly discount the term anthropogenic the imbecile failed to recognize and include in the duck-ument.

You know something? I'm beginning to wonder what his real certification of birth has on it. Maybe it won't say Kenya or Mombasa after all. It's more likely, judging by his alien thought patterns, to say "A citizen born on Planet Zarg." For the boy's plainly and clearly Zarg-castic.

August 31, 2013
Life, liberty, and the pursuits of Vasile Dahorea

October 16, 2012
Collectivism, sociopathy, division and other cancers; The cure!