Wes Vernon
Obama and America's enemies: first Iran, then Honduras - see a pattern here?
The return of the Clinton machine? The cowardly attacks on Palin

July 6, 2009
America used to be the "shining city on a hill," as Ronald Reagan defined it.

That was then, this is now. Under President Obama, the U.S. is shrinking from speaking out for freedom wherever it is snuffed out and wherever freedom-loving people are willing to fight tyranny with little more than their bare hands. Worse, the Obama administration has been offering comfort to the bad guys.

Dictator Mahmoud Ahmadinejad "won" re-election in a contest in Iran that was clearly fraudulent. As the people of that theocratic police state took to the streets to protest, our president offered nothing but weasel words of moral equivalence. Iran  remember  is building nuclear weapons and has not hesitated to express its hatred for America and our allies. Still our president waffled for days. Mustn't be "meddling," you know. None of our business that a would-be nuclear Iran wants us dead?

Secretary of State Hillary Clinton  apparently with the backing of Vice President Joe Biden  urged the president to speak out in favor of the dissenters and against the Iranian regime's violent suppression of their protest. The president  who has on occasion voiced frustration that the Founding Fathers left him with a Constitution that curbs his Marxist instincts to control every facet of our lives  at first resisted Clinton's advice.

Later Ahmadinejad's crackdown became increasingly bloody. White House spokesman Robert Gibbs described the situation in Iran as a "vigorous debate." Excuse me? A shot in the head hardly qualifies as "debate." It's like saying Stalin had a "debate" with the people he either executed or sent to the gulag. Maybe Hitler had a "debate" with the victims of the holocaust?

Only when the "debate" excuse provided grist for the mill of dark humor did an embarrassed President Obama finally speak out in favor of the protesters. In so doing, he lacked the courtesy to inform Secretary Clinton in advance. (Note Blood in the Water? toward the end of this column.) 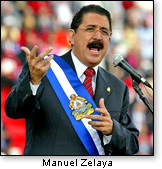 Ah, but then in a White House where words (on or off the teleprompter) have little meaning, there is "meddling" and then there is  well, "meddling."

Honduran President Manuel Zelaya was ousted through a bloodless democratic process because he tried to sponsor an illegal referendum to make him President for life. All of a sudden President Obama's knee-jerk reaction was to spring into action  on the side of the would-be dictator. Suddenly, well  maybe "meddling" was not so bad after all  not when the holy cause of Marxist-backed dictatorship hangs in the balance.

Without batting an eyelash, our non-meddler-in-chief eagerly joined forces with Communist thugs Hugo Chavez, Daniel Ortega, and the Castro brothers  and urged that Zelaya be reinstated. The president conveyed these views via Secretary Clinton, who apparently was "with the program" this time around (albeit with some reluctance). Also piling on was the UN General Assembly  headed by Miguel Escoto, a communist veteran of Nicaragua's Sandinista government of the eighties.

The argument they used was that Zelaya was "democratically elected." So was Adolph Hitler. Democracy lasts only so long as those in power respect it and do not try to undermine it. The old one-person/one-vote/one-time is not democracy. The dimwits of American liberalism don't understand that. Either that or they understand it all too well and believe a good Marxist tyrant should be allowed to remain in office for life, no matter how it's done.

The attorney general of Honduras warned Zelaya that the president-for-life referendum was illegal and that he would be prosecuted if he forged ahead with it. Zelaya was undeterred, resorting to the "democratic" act of inciting a mob to seize and distribute ballots that had been imported from Chavez's non-meddling government of Venezuela. The military  bowing to the wishes of the legislative and judicial branches of government  escorted Mr. Zelaya out of the country at dawn, exiled him to Costa Rica, and warned him not to return. He was succeeded by the next in line, according to the Honduran constitution. Totally bloodless, though it probably would have been better if the Congress of Venezuela had instead impeached the man. Nonetheless, it was brought about by the democratic process. 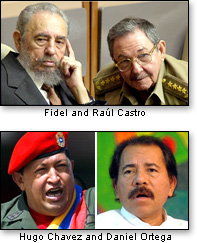 Charles Krauthammer  one of America's more thoughtful pundits  has made the point that when the president of the United States finds himself on the same side as Latin America's Communist regimes  of the Chavez-Castro-Ortega variety  he should "re-evaluate" his positions.

One could go beyond that and recall, for example, that Obama has been backed or influenced by Marxists  some of them violence-prone  throughout his career, not the least by his father who was a Marxist drunk.

Is it out of bounds at least to wonder if our president is using the heft of the United States government to provide reinforcement for his Marxist buddies? After all, he recently sat smiling through the anti-American tirades of Chavez and Ortega at an OAS gathering. And in this latest flap, Chavez approvingly noted that perhaps he can now smile benignly on us because America  under its Marxist influenced president  has "changed." Oops! There's that word "change" again.

By the time you read this  who knows?  the leftist regimes of Castro, Chavez, Ortega, and Obama may have succeeded in reinstating their soul mate, Zelaya. One way or the other, this has been a teaching moment: It doesn't matter if the freedom forces are out on the streets protesting, or are in power, or are fighting off the tyrants backing an ousted would-be dictator. In all of the above cases, our president has sided with America's enemies. But in the mind of a Marxist, you can turn on a dime with regard to principle, depending on the best interest of the "revolution."

Sidebar: Blood in the water?

Secretary Clinton's obvious discomfort with potential political fallout from Obama's foreign relations attitudes is linked to the fact that the Clintons are showing signs of detecting Obama as the proverbial emperor with no clothes.

Item 1  The New York Times has reported that Hillary Clinton has been in talks with one of her family's staunchest political allies  Sidney Blumenthal  about the latter's possibly joining the State Department as a "consultant."

You can translate the word "consultant"  as applied here  as meaning hit man. Known by his critics as "Sid Vicious"  the former reporter for the Washington Post (where else?) spent his time in the Clinton White House smearing anybody and everybody who dared to speak out against Bill Clinton's serial scandals.

Interestingly, he has been e-mailing to political insiders several sharp criticisms of President Obama that have shown up on the Internet.

Item 2  Former President Bill Clinton is to be the headliner at a fundraiser for New York City's Upper East Side Congresswoman Carolyn Maloney, who has signaled an intent to run in the Democrat primary next year against Sen. Kirsten Gillibrand who replaced Hillary in the Senate when the latter went to State. This goes against the pleas of President Obama, who wants Gillibrand to have a clear path for the nomination without any bruising primary battles.

Think maybe Hillary is plotting a primary battle of her own against Obama in 2012? The Clinton machine gets antsy when out of power. The job of Secretary of State gives her some limelight, but little power  a bore.

Contrary to what you've been hearing from the paid TV guessers whose job is to keep "wiggling the needle" to fill air time, it is altogether possible that Sarah Palin's sudden exit from the Alaska governorship may very well have nothing to do with (A) a looming "the other shoe to drop" scandal, (B) a shot at the presidency in 2012, or (C) a (least likely) running from the battle because she "can't take it."

The Beltway cocoon has a tough time considering that Palin may have a long-term strategy built around the fact that her kids are bearing the brunt of the vicious hate campaign against her, and that to spare them, she is planning  as she says  to spread the conservative message on her own time  unencumbered by running a state.

That way, she can travel to the lower 48 for speaking appearances on a schedule that she dictates  and that allows her also to tend to her family's problems, and most importantly, allows the kids to grow up. Then perhaps 2016  not 2012  would be the time for her to make a full run for President. She's now only 45. In 2016, Sarah Palin will be 52  still young enough to "go for it." Millions of people are fascinated by her for the same reason the Beltway elites loathe and despise her: she's a normal down-to-earth middle-class woman.

The Vanity Fair piece on Palin was nothing but a political hatchet job that recycled the old smears from anonymous sources. Anonymous information is the staple of good investigative journalism. Anonymous cheap shots are another matter.

The McCain campaign "sources" who are taking pot-shots at Palin though the media are too cowardly to let this woman know who's attacking her. You've heard of hiding behind a woman's skirts. This is a case of hiding from a woman in skirts. Why are they afraid? Scared that a hockey mom from Alaska will retaliate in a manner that will injure their vulnerable "dignity?"

That Vanity Fair would publish the trash without putting some names to it prostitutes any claim it may have to serious journalism.