Wes Vernon
The latest media scandal: letting the "death panel" cat out of the bag
Socialized medicine, Part 7-the "mob" that isn't

August 17, 2009
This past week, we have witnessed a brainwashing campaign worthy of Pravda from the old Soviet Union. The very ferocity of an Obamacare chorus could not have been more emphatic if it had been coordinated.

Or if it simply got too close to the truth for comfort in some quarters  even for normally sensible pundits who can get caught up in a wolfpack and join the jackals like lemmings. Said jackals are targeting Sarah Palin (who  as usual  stands her ground)  and ordinary citizens who dare to turn out at townhall meetings and hold their congressmen 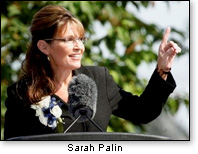 accountable for any messing with their health care. Less able than Palin to fight back, these citizens are being mercilessly smeared.

From the Associated Press:

"Former Alaska Gov. Sarah Palin refused to retreat from her debunked claim that a proposed health care overhaul would create 'death panels,' as the growing furor over end-of-life consultations forced a key group of senators to abandon the idea in their bill."

This is the real AP?

"Debunked" claim? Really? "Disputed" claim, certainly, but not "debunked" unless you're writing a commentary  an opinion piece. Then you can call it what you like (though a responsible commentator would be prepared to back his opinion with facts). But trigger words like "debunked" have no place in what purports to be a straight news story unless they're attributed to someone who is part of the story, with the reporter making a good-faith effort to seek out comment from an opposing view.

That is not the case in this instance. Here we have the Associated Press flatly taking sides in a news story about a highly emotional and controversial issue. This is a journalistic scandal.

It is not the AP that I knew as a broadcast reporter and for which I filed some stories of my own  a practice the AP encouraged from its co-op members.

In those days, Associated Press was the gold standard for honest efforts to play every story straight down the middle and leave the commentary to opinion pieces clearly labeled as such.

Just to make certain I had not somehow misunderstood, I Googled the bylined author of the story to make sure he was in fact an Associated Press writer. He was (and presumably still is). AP forsakes its legacy.

And the beat goes on

The Palin pile-on regarding the "death panel" issue was overwhelming and all out of proportion to whatever "offense" the former Alaska governor had inflicted by the mere statement of her analysis following a careful reading of a House bill on health "reform."

Here is what Governor Palin found:

In Section 1233, advanced care planning consultation is authorized for senior Medicare clients every five years, and more frequently "if there is a significant change in the health condition of the individual...or upon admission to a nursing home facility, a long-term care facility...or a hospice program."

Palin notes that during those "consultations," the practitioners must explain "the continuum of end-of-life supports available [such as palliative care and  again  hospice]" and what government benefits are available to pay for such services.

The Washington Establishment weighs in

Of course, the voice of Beltway liberalism was not to be denied a role in the latest anti-Palin hysteria. Under the headline "Death Panel Sideshow," the Washington Post opined, "Tucking the measure in question [the 'end-of-life consultations'] into a bill that focuses substantially on controlling costs may have been a mistake."

Bingo! And one logical translation of that is: Hey, you dummies, you're talking about end of life consulting in the same breath that you're preaching cost-control? Where are your brains? You're letting the cat out of the bag.

The old admonition to "keep your eye on the ball" applies here.

The issue is not whether Sarah Palin's use of the term "death commissions" was "inelegant," as the Wall Street Journal said in a generally supportive editorial. What the former vice presidential hopeful was driving at was how such a program could be misused if it were to fall into the wrong hands.

It requires no wild imagination to posit the mischief that could be inflicted in a situation where bureaucrats  under pressure to contain costs  decide to hurry up an intended benign process in such a way that it ends up accomplishing something tragic, if not sinister. However, Palin never said the words "death panel" were in the bill. That was her shorthand description.

If you think her concerns are far-fetched, consider that President Obama's health care adviser  Dr. Ezekiel Emanuel  has written that younger people should get priority in medical care. Also note that the president's science adviser, John P. Holdren  in a book he co-authored  has declared, "Unlike allocation by race or sex, allocation by age is not invidious discrimination." BTW  Mr. Holdren has also suggested he is open to the idea of forced abortions for population control.

Ironically, the very issues that Palin raises were also explored in a column by one of the Washington Post's own editorial writers. In an August 8 column, Charles Lane says of the "consultations": "The doctor 'shall' explain that Medicare pays for hospice care (hint hint)." Then the Post editorialist adds:

"The doctor 'shall' discuss advanced care planning, including key questions...and suggested people to talk to...."

To which Lane adds. "What are 'key questions?' Who belongs on a list of helpful 'resources'  [people to talk to]? The Roman Catholic Church? Jack Kevorkian?"

Again from Lane's article: "To me 'purely voluntary' means 'not unless the patient requests one.' Section 1233, however, lets doctors initiate the chat and gives them an incentive  money  to do so. Indeed, that's an incentive to insist."

And then Lane nails it: "Patients may refuse without penalty, but many will bow to white-coated authority. Once they're in the meeting, the bill does permit 'formulation' of a plug-pulling order right then and there. So when Rep. Earl Blumenauer (D-Ore.) denies that Section 1233 would 'place senior citizens in situations where they feel pressured to sign end-of-life directives that they would not otherwise sign,' I don't think he's being realistic." (Italics added)

Again, those words come from a columnist with the same newspaper that dubs Palin's legitimate questions about end-of-life consultations a "sideshow."

Putting aside the views of President Obama's health care and science advisers, and assuming the purest of motivations, it is well to note the words of Robert Knight, Senior Fellow at the American Civil Rights Union, who says that "man, even with the best intentions, can turn tyrannical."

Some conversations in recent days with Beltway "insider"-types regarding grassroots citizens speaking out on health issues at townhall meetings are ripe for sharing.

Allegation: The disruptions at those meetings are fomented by "right-wing goon squads" (not real citizens of the community) and resemble the old Hitler tactic of breaking up meetings to cause as much chaos as possible.

Answer: Where's the evidence? All I know is when reporters checked license plates at cars parked at some of those gatherings, they found they belonged to local residents  constituents of the congressman who was getting hammered at the meeting inside for his tin ear on an issue involving the ultra-personal issue of one's health. These are genuinely concerned citizens.

Allegation: They can't be spontaneous because the disruptions started so "suddenly."

Answer: That's because Congress "suddenly" adjourned for its August break. That way, the great unwashed "suddenly" had an opportunity to confront their congressman face-to-face on the issue of whether satisfactory health care plans were to be scrapped  and replaced with inferior service and additional debt. The chance to talk to the hired public servant "suddenly" emerged because "suddenly" he was home  not in Washington.

Allegation: Some of these people are being bused to the meetings.

Answer: In a few instances, people were bused in from nearby areas. However, supporters of Obamacare have also been bused there. In fact, even the best efforts of the White House to control the agenda at the president's meetings in New England, Montana, and Colorado did not completely shield him from pointed questions, albeit without the shouting that characterized earlier townhalls. (People not bashful about yelling at a congressman are reluctant to do so when confronting the leader of the free world.)

BTW  supporters of Obamacare reportedly plan to turn out in force to cheer on their cause at a townhall meeting to be conducted by Rep. Janice Schakowsky (D-Ill.) later this month.

In the political atmosphere that sometimes prevails in Chicago, Ms. Schakowsky  an Obama backer  has little reason to believe she will be sassed back at her own meeting. Supporters determined to drown out the critics intend to be there (possibly with baseball bats  in some Chicago precincts  who knows?) .

Allegation: These primitives from fly-over country wouldn't dare show up at a townhall meeting in the district of Rep. Jim Moran (D-Va.).

Answer: They probably wouldn't show up for Moran. Why should they? He's not their congressman. (Duh!) Congressman Moran, a hot-tempered liberal, represents a district chock-a-block with government officials, and bureaucrats who work for them, as well as lawyers, lobbyists and others who have an interest in expanding the federal government. Not many of the pitchfork crowd likely to be found in those precincts.

There is nothing quite so hysterical as denizens of the Washington establishment up against a constituency that is "mad as hell" and unwilling "to take it anymore." The smears through their powerful media echo chambers are deafening, but citizens are fighting back.

Things can turn on a dime, so activists are determined to fight until this thing is dead, dead, dead. As of this writing, things are going our way. Senator Kent Conrad (D-N.D.), the chairman of the Senate Budget Committee, said on FoxNews Sunday that he is in no rush to meet the September 15 deadline agreed upon by the president and Senate Finance Chairman Max Baucus (D-Mont.).

Bear in mind Senator Conrad is up for re-election next year. Senator Baucus is not. You don't suppose the smear machine in Washington fears that the more people learn what's in the Capitol Hill proposals, the more the political stakes become dicey for them?

Hmmmm  Sarah Palin...the citizen turnout at the townhalls...Independents turning against the Washington power structure. Do you liberals sense a revival of the Reagan Democrats? Another hard hat/pitchfork rebellion? Happy nightmares, guys!