September 7, 2009
Is it time to explore a new means of keeping parents up to date as to what their children are learning in school? Modern technology should facilitate that. Consider what follows:

Some of the fears expressed by parents and other activists this past week call to mind a short feature shown in movie theaters all over America during World War II, wherein little kids in German schools were depicted as saying  one after the other  "I belong to Der Fuehrer!" 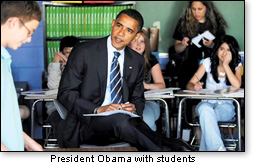 That kind of ultimate hero worship of the President of the United States was not bluntly advocated in the federal Department of Education's plans for a speech by President Obama to the nation's school children.

Some conservatives in fact have warned against making too much of the controversy on the grounds that it will boomerang on Republicans. Don't worry. The Republican Party these days is largely comatose anyway.

No, this is coming from the grassroots  from parents who don't want their kids spoon-fed any politically ideological propaganda. Really? That train left the station years ago. It is not for nothing that many have viewed much of government education  elementary, secondary, and higher  as indoctrination. (Over Labor Day weekend, FoxNews did a special on school textbook propaganda.)

So what else is new? Several past presidents have spoken to school children. But in no previous instance was the chat accompanied by a "Pre K-6 Menu of Classroom Activities" in connection with the president's speech. Included (until late Wednesday) was a project whereby the students would write letters to themselves about what they can do to help President Obama.

The idea of asking kids to confront the question of how they can help Obama may have been  as Charles Krauthammer opined  the goo-goo brainstorm of "some bonehead" at the Education Department (though it has since been reported the White House was in on the planning  suggesting the "bonehead" might have been there). But the administration said it would yank that and other parts of the project that many parents interpret as an attempt to indoctrinate young children with Mr. Obama's socialist agenda.

The White House announced the program would be revised, with the full text placed on the internet on Labor Day, about the time this column is posted. Ordinarily, the final project would end up with presidential good-citizenship advice such as work hard, don't drop out of school, obey the law, etc., and it would be a one-day story with everyone going back to other weightier matters.

Here is why parents were concerned: They don't trust President Obama to talk directly to their kids. Why?

The file on Obama and the issue of education is crammed full of reasons why parents have every justification to be concerned about Obama's influence on their children. That is a terrible thing to have to say about the President of the United States  but I'm sorry, I'm just the messenger here.

Counting (some of) the ways

Start with Barack Obama's own early education at the knee of Frank Marshall Davis  a Communist and pornographer.

Then search the writings of Sol Stern of the Manhattan Institute. He has the ultimate file on Obama's pal and political backer Bill Ayers, on whom the president bestows the bland designation "a tenured professor at the University of Chicago,"  ignoring his background as a bomb-throwing Weather Underground terrorist. Mr. Ayers has much to say about education and its use as a tool to turn the nation's children into little Marxist revolutionaries.

Ayers has written approvingly about the ideas of a radical Columbia University Teachers College professor, Maxine Greene, who taught that all traces of the "oppressive hegemony of capitalist social order" should be banished from the classroom, to be replaced with  as Stern describes it  "a rancorous view of America in which it is always two minutes to midnight and a knock on the door by the [capitalist] thought police is imminent."

Stern continues: "The education professors feel themselves anointed to use the nation's K-12 classrooms to resist this oppressive system."

"All music to Ayers's ears," Stern observes. "The ex-Weatherman glimpsed a new radical vocation. He dreamed of bringing the revolution from the streets to the schools. And that is exactly what he has managed to do."

Or, as Ayers was quoted as saying in a visit to Communist dictator Hugo Chavez's Venezuela:

"I walked out of jail and into my first teaching position [note: well, yes, I guess it beats being on the lam for about ten years]  and from that day until this, I've thought of myself as a teacher  but I've also understood teaching as a project immediately connected with social justice."

Anti-free speech Stalinists have gone out of their way to shut up anyone who exposes Ayers's effort to use the classroom as a platform for Marxist indoctrination. (See this column "Communists for Obama"  10/20/08)

Researcher Stanley Kurtz uncovered information on Ayers' and Obama's close collaboration on education issues with the help of a $100 million-plus grant at the Chicago Annenberg Challenge (CAC).

Kurtz found that Obama and Ayers worked to steer that generous funding  nominally intended for school "reform"  instead toward a project whose aim was to involve kids and their parents with hate-America radicalism.

Under their guidance, the project turned down applications to advance kids' knowledge of math and science, and instead used the money to pay for Afrocentricity and bilingualism and related subjects. It figures that Marxists  whether self-proclaimed or thinly disguised as liberals  will avoid teaching kids things like math and science. Can't do that. It may enable them to succeed in the evil capitalist system. Must keep them poor and angry, so they will back the hate-America agenda. It's an old con game. Marx, Lenin, and Stalin would be pleased. 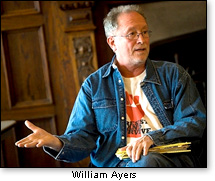 As Sol Stern puts it, "Calling Bill Ayers a school reformer is like calling Joseph Stalin an agricultural reformer."

Ayers called himself a communist with a small "c." Communists (capitalized or otherwise) supported Obama for his present job.

So this president's speech to children is not to be confused with those of his predecessors Ronald Reagan, the two Bushes, or even Bill Clinton. Parents should not be blamed for wondering what's going on in their kids' classroom.

 By now, you are no doubt aware of an assembly at an elementary school in Farmington, Utah, that showed a pro-Obama video I Pledge wherein celebrities pledged "to sell my obnoxious car and buy a hybrid," "to the funk and to the united funk of funkadelica," and "I pledge to be of service to Barack Obama."

The principal was quoted by the Salt lake Tribune as admitting she made a mistake by not pre-screening the video. She entrusted that task to a local PTA board. It would be interesting to ask those board members what they were thinking.

 A New Hampshire court has ordered a home-schooled Christian girl Amanda Kurowski to attend public school. District Court Judge Lucinda Sadler decreed that "Amanda's defense of her religious beliefs...suggests strongly that she has not had the opportunity to seriously consider other points of view." Since when is that the prerogative of anyone but the parent? Especially given that the girl's academic achievement was above school standards, and she was taking supplemental public school courses in art, Spanish, theater, and physical education, and was into extra-curricular activities wherein she interacted with other children.

But that was a Christian education. That was the problem. Now, on the other hand, if it were education of another faith  well, that's different. Malcolm Kline of Accuracy in Academia writes, "Indeed parents continue to voice their alarm over the [disproportionate] manner in which California public schools teach seventh-graders about Islam compared to other faiths. One parent wrote to me that six years ago his son had a class in which the history teacher gave him a take-home test with the question, 'How does following the 5 pillars of Islam make one a better person?'"

Parents in on the conversation?

Congressman Roscoe Bartlett (R-Md.) encouraged parents to attend school with their children to listen to the president's back-to-school speech and lessons associated with it.

That is an excellent idea. And some education activists would carry that idea a few steps further:

Why not require that official school activity  the lesson, the textbooks, assembly speakers, videos  be put on the internet so that parents will have an ongoing opportunity to know about the education of their offspring? Let's have a discussion about that.

Senator Baucus  in the doghouse with the White House?

As a follow-up to last week's column ("'Revolution' coming to the USA?"), I am informed by Michael Dougherty of Bozeman as to how the Obama entourage stacked the president's "health care" town hall meeting near Bozeman, Montana.

It was reported the president snubbed Max Baucus (D-Mt.), the state's senior U.S. Senator. Governor Brian Schweitzer and the state's junior Senator Jon Tester received tickets for distribution, but none for Baucus. Speculation is Baucus was slighted for his failure to produce a Senate "health care" bill out of his Finance Committee by the August recess. The White House won't comment.

Baucus  in hot water with his constituents?

Senator Baucus also visited Bozeman for a health symposium, and later told the press he was surrounded "by an angry mob," and was "physically threatened" by the group.

Dougherty says that "at no time, from the time [Baucus] stepped out of his car until he got back in, was there any reason for him to feel threatened." 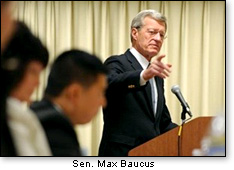 The people in the crowd did get frustrated when they perceived they were not getting straight answers to some of their questions, including Dougherty's attempt (four times) to get the senator to say if he "would agree to be on the same [health care] plan that he voted for."

After some non-answer answers, Dougherty says he asked for a yes or no response. Senator Baucus answered, "Generally." The crowd took that as a no.

One report has it that Obama's party ordered lobster flown in for the main meal as he was met and was greeted by friends and supporters in Bozeman. Some commented that with Montana producing what is arguably the best beef in the world, why wouldn't a visiting president honor an engine of the local economy? The White House won't respond to an inquiry about that either.