Wes Vernon
Socialized Medicine, Part 9 - Obama administration upended by its own health care report
Obama/Congress in race against the people; also...police state tactics in Copenhagen (and in Washington)

December 14, 2009
Almost any other presidency would by embarrassed by a report from within its own administration that exposes its number one legislative priority as an anti-family fraud. But not the Obama White House. Its response to a negative study of its Health "Care" bill resembles Al Gore's reaction to contradictions to the "sky-is-falling" hysteria over "man-made Global Warming": Ignore it and hope it goes away.

The Centers for Medicare and Medicaid Services (CMS) has given the Democrat health care legislation a failing grade. This is the administration's own scorekeeper  flatly discrediting the White House position that the massive bill would lower the cost of health care for America's families.

White House war on the family

Senate Republican leader Mitch McConnell reminded his colleagues in a Senate floor speech that CMS Chief Actuary Rick Foster (who crunched the numbers) "is the person the administration depends on to give it a straightforward, unbiased analysis of the impact the legislation would have."

One need not take Senator McConnell's word for it. All he did was read into the record the findings of the impartial actuary. The report comes up with findings that give a strong hint as to why the 60-40 Senate Democrat majority is so hell-bent on ramming the bill through, even though  at last report  61 percent of Americans oppose it. If the word gets out about this damning report, the popular opposition is likely to trend even higher.

Reasons to oppose this bill

The CMS faults the legislation now being debated on Capitol Hill on several important counts:

2  New fees for drugs, devices, and insurance plans in the Dem's bill will increase prices and health insurance premiums for consumers (page 16). 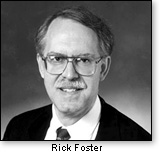 3  The CMS analysis shows that claims about the bill supposedly "extending the solvency of Medicare" are based on the shakiest of assumptions.

4  This crown jewel of President Obama's Marxist agenda for you and me (whether we like it or not) creates a new long-term insurance program (Class ACT) that Mr. Foster and his fellow CMS actuaries found faces "a very serious risk" of becoming unsustainable (page 19).

5  In fact, the actuary shows that such programs face a significant risk of failure (page 13).

6  The legislation (currently on an Obama fast-track timetable for approval by Christmas) pays for a trillion dollar government expansion of health care with nearly one trillion dollars in Medicare payment cuts (page 18).

7  Obamacare is especially likely to make providers unwilling to treat Medicare and Medicaid patients  which in turn means a significant portion of the increased demand for Medicaid services would be difficult to meet (page 18).

8  The CMS actuary noted that the Medicare cuts in the bill could jeopardize Medicare beneficiaries' access to care.

9  He also found that roughly 20 percent of all Part-A providers (hospitals, nursing homes, etc.) would become unprofitable within the next ten years as a result of these cuts (page 9).

10  The CMS actuary found that further reductions in Medicare growth rates through the actions of the Independent Medicare Advisory Board  which advocates have pointed to as a central lynchpin in reducing health care spending  "may be difficult to achieve in practice" (page 18).

So, what's the rush?

It is painfully obvious why Harry Reid is under pressure from the Obama White House to get the bill through the Senate by Christmas. (Actually, the president's dream is to get the measure not only approved by the Senate before the holiday adjournment, but also settled with finality in a House-Senate conference committee and then on to the president's desk for his signature. But that is a pipe-dream, given the wide differences between the two bodies on such thorny issues as abortion and the government "option.")

What the Obama Administration fears is that if lawmakers go home without finishing their work on the bill, they will hear from constituents in their districts and states, and popular opposition will turn Democrat lawmakers with conservative constituencies against the legislation  thus killing government-run health care for at least a generation.

Already, the Democrats figure they will take some political hits for this in next year's congressional elections. But in the long run, they believe that if they create yet another "entitlement," it can be used as a tool for demagoguery for the rest of the millennium. One recalls the advice Franklin D. Roosevelt got from his closest New Deal advisor  Tax! Tax! Tax!  Spend! Spend! Spend!  Elect! Elect! Elect! (How ironic that years later, that advisor  Harry Hopkins  was exposed posthumously as a Soviet agent.)

That is what is going on here. They know their mischief is unpopular, but they forge ahead anyway  with visions of political gold down the road after the backlash subsides (which they believe will happen; they do not credit you with having a long memory  like all Marxists who claim to speak on behalf of the masses, they think you're stupid).

Climate police bare fangs in Copenhagen and in Washington

This past week, we got a chilling glimpse of a Marxist style we can expect when the world is ruled by yesterday's Reds-turned today's Greens.

That ruling opens the door for massive taxes and regulations so onerous  and consumer prices so sky-high  as to lead ultimately to a de-industrialized U.S.

The Obama administration and its Red/Green allies have said in so many words that this finding should resurrect from the dead the "Cap and Trade" legislation now stalled in the Senate, and further that if your elected lawmakers continue to sit on the bill, well, the EPA will have no choice but to impose its own version.

That bill  having passed the House in the dead of night by a slim majority (requiring the votes of eight Republicans who should know better)  is dead in the water on the Senate side precisely because Americans are alert to what is going on and they are understandably alarmed.

Right here is a prime example of the jack-boot mentality at the White House. This is the loud and clear message: If the people's elected representatives listen to their constituents and fail to pass this stifling tax on American families, we will step in and do it ourselves by government fiat and it will be nastier than if your legislators accomplish it. Same goal  except our faceless bureaucrats won't listen to you along the way. Your congressman will.

Tell me, please, how this differs from the mob enforcer who comes around to a small business to collect extortion money, warning the shop owner with a smile, "Just pay us on time, and everything's cool" (no broken windows, broken legs, or mysterious fires).

President Obama reportedly is set to tell the World Climate conference in Copenhagen that he will use the endangerment finding to reduce the U.S.'s greenhouse gas emissions by 17 percent by 2020, and that American taxpayers will contribute $10 billion of dollars a year to "developing countries" to help enable them to reduce their emissions.

Appearing on Fox News Sunday, Senator James Inhofe (R-Okla.) said he intends to make it clear to the other 191 countries gathered in Denmark that "the president can't do that." He added that those same emission reductions are included in the Cap and Tax bill bogged down in the Senate, which Inhofe said "is dead, it'll never even be brought up again."

As for the $10 billion for "developing" nations, Senator Inhofe noted, "Here's China with $800 billion of our debt, and we're going to give them ten billion dollars to stop generating electricity. I don't think that's going to happen." As the Oklahoman makes clear, it would indeed pile insult onto injury.

If the EPA tries to follow through and override the Congress of the United States, we could have a court case in the works that defines whether we still have a country that you and I recognize.

The jack-boot at Copenhagen

The second preview of how the strong arm of the Red/Green alliance intends to enforce its agenda and silence its critics was on display at a session of the Copenhagen conference.

The question focused on Climategate, the scandal whereby a scientist was caught sending e-mails revealing he had deleted data that contradicted the "man-made global warming" hoax, and urging his colleagues to do likewise.

Schneider responded  somewhat heatedly  that the e-mails had been presented "by people I do not trust." 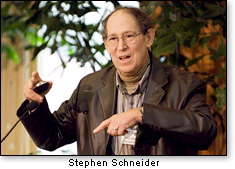 When McAleer followed up by asking for a comment on the fact that the university involved had attested to the accuracy on the e-mail, that's when Schneider ordered uniformed UN officials and members of his staff to cut short the questioning.

There you have it: If your congressman does not obey White House orders, you will be punished by ever steeper taxes and even worse regulations than you would get with the Cap and Tax bill. And if anyone (with or without a press pass) asks probing questions at our public gatherings, he will be ejected from the meeting. When one of our propagandists is cornered with embarrassing questions, no pictures allowed. A preview of a future Red/Green government?

So let's see if we have this straight

The powers that be want to ram through a bill before Christmas that dictates our doctor-patient relationships and takes over about one-sixth of the economy  causing higher premiums and a shortage of doctors. At the same time, we are being threatened that if we don't beg our congressman to stick us with punitive taxes in an economy offering fewer jobs, the Red/Green alliance will go ahead and do a job on us that is even worse, and will kick us out of the room if we ask rude questions. That's our choice. Not much merriment this season.