Wes Vernon
The State of the Union address: do we really need it?

February 1, 2010
The Constitution of the United States says  "He [The President] shall from time to time give to Congress information of the State of the Union and recommend to their Consideration such measures as he shall judge necessary and expedient."

Read that again. Please point out to us where it says the president shall appear in person to deliver the State of the Union (SOTU) address. Please show us where the Constitution mandates that such personal appearances by the President of the United States shall be accompanied by all the grand theatrics and pronouncements that are replete with monarchial ceremony.

None of that is stipulated in the Constitution. The Founding Fathers  wisely incorporating the best elements of English tradition (the Magna Carta, for example), while avoiding the excesses of British royalty culture  would be mortified were they to witness how interpretation of that one sentence in the Constitution has evolved over the years.

Wikipedia actually says the SOTU speech literally is "modeled after the monarch's Speech from the Throne during the State Opening of Parliament in the United Kingdom...." Is there no one in the Congress or in the court system to take note of this accurate (but not constitutionally-mandated) breach of the founders' intent?

Had the framers envisioned the advent of television, they would have added one more caveat expressly forbidding the president to deliver the speech in person  lest its very public display suggest a rupture in the separation of powers as laid out in their brilliant document.

It is true that our first presidents  George Washington and John Adams  delivered their State of the Union reports in person. It is not certain their appearances were accompanied by royalty-laced ceremony. Given their living memories of life under the yoke of His Majesty King George III, that is doubtful. In fact, some reports indicate that such occasions were soon followed by back and forth arguments between the executive and (separately) the House and the Senate.

It was left to our third president  Thomas Jefferson  to nip that personal-appearance routine in the bud. This was America, and although his predecessors were honorable men with good intentions, Mr. Jefferson feared that they may have inadvertently set a precedent that could someday lead America's former British subjects back to their unwanted roots.

His successors all throughout the 19th Century followed suit and sent their messages in writing. Of course, they didn't have TV producers nagging them to put on a good show.

One of them  Rutherford B. Hayes  even took note of the fact that the relevant constitutional sentence did not even stipulate that such reports were necessarily required on an annual basis, written or oral. The phrase "from time to time" is open to broader interpretation. 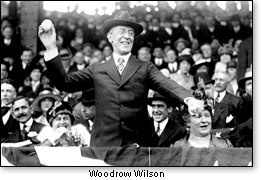 But then came the Imperial Presidency

The first president to revive the live performance before Congress was the most sanctimonious, self-righteous, race-baiting, war-centric human being ever to occupy the highest office in this land. Perceiving himself the equivalent of royalty, Thomas Woodrow Wilson did not need radio or television (both of which then remained in the future) to assist in his self-aggrandizement. He himself  at least in his own mind  was larger than life, and that was all that was required.

So in the early 20th century, he brought back the State of the Union with the president  live  in all his magisterial eminence.

The tradition grew once radio entered America's households, accelerated when "talkies" allowed for newsreel coverage to appear in theatres across the land, and bolted over the top when television brought the big screen to American living rooms.

Then one night, the "system" of political theatre reeled out of control when our 44th president  Barack Hussein Obama  chose to use the bully pulpit in the people's House of Representatives to sandbag a separate and equal branch of government  the United States Supreme Court.

The reason for calling out the justices  six of whom were seated directly in front of him  was bad enough. In less than 15 seconds time, one sentence in President Obama's State of the Union address contained two outright lies. Said he:

"With all due deference to the separation of powers, last week the Supreme Court reversed a century of law that I believe will open the floodgates for special interests, including foreign corporations, to spend without limit in our elections."

That a former professor of Constitutional Law would exhibit such blatant contempt for the First Amendment assurance of free speech is bad enough. (See last week's column "Speech Nazis," 1/25/10.)

That this same alleged legal scholar would utter such total inaccuracies about the law compounds the offense.

1  The 100-year injunction against foreign firms and individuals influencing our internal elections remains. The court did not reverse that. 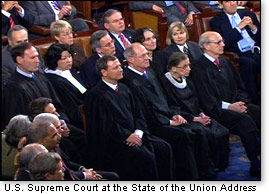 2  The High Court in Citizens United vs. the Federal Communications Commission did not open the "floodgates" to anything other than the multiple voices whose interests now can be heard. At one time, a survey showed that at least 80 percent of Americans belong to one "special interest" or another. The only "special interests" that threaten the democratic process are those that would muzzle the right of Americans to express themselves  whether it is through advertizing, contributing to their causes/candidates, or whatever. (Another such threat would be those "public servants" who fancy themselves public masters and who seek  behind closed doors  to ram through 2,000-plus pages of "health care" legislation in defiance of public opinion.)

Before we outline our next point, let it be stated for the record that this column does not believe the Supreme Court is or should be above criticism. Those who know me or my writings over the years will testify to that.

What was unseemly about President Obama's outburst the night of January 27 was his calling out the justices who had been invited by the Congress to attend the session, which they did out of respect for the office of the nation's chief executive.

Moreover, they were seated right in front of him  surrounded (as he knew they were)  by a few hundred of his own political supporters in Congress and the cabinet, and he knew they would be on their feet cheering him and jeering the justices.

The president has every right to criticize the court  as many of his predecessors have also done. And the jurists are big boys and girls who can "take it."

What is inappropriate is the setting, and the appearance of an attempt on the part of one branch of government to intimidate another. Further, the president's obvious encouragement of the jeering had the aura of a mob wolfpack mentality  vaguely reminiscent of the "hanging parties" in the old western movies. It would be interesting to know if Chief Justice John Roberts had anticipated the attack, then tried  and failed  to persuade is fellow justices to walk out in that event.

As it was, Justice Samuel Alito was roundly (and unfairly) criticized for merely shaking his head and quietly mouthing the words "Not true" or "That is not true." Less attention was paid to Justice Sonya Sotomayor (an Obama appointee who voted in the minority on Citizens United, as she raised her eyebrows at the president's attack).

Not the first time 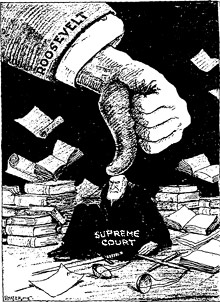 In an earlier era, another president was elected to the White House on the anxiety of bad economic times, and took precisely the same contemptuous attitude toward a Supreme Court that would not bend to his will.

Having been re-elected to a second term by a spectacular landslide in 1936  carrying all but two states  Franklin Delano Roosevelt interpreted such popular approval as the green light to do with power whatever he wished.

With four of the High Court's justices seated at his inaugural  including Chief Justice Charles Evans Hughes, who swore him in  the newly re-elected president ominously intoned, "We are beginning to wipe out the line that divides the practical from the ideal. And in so doing, we are fashioning an instrument of unimagined power for the establishment of a morally better world." (Italics added.) That declaration stunned even some of FDR's allies  who, wrote historian Amity Shlaes, were "taken aback" by such breathtaking assertion of raw power.

Apparently Roosevelt  like Obama decades later, an alumnus of Harvard Law School  imagined the voters' 11 million vote margin had bestowed upon him all the power of a monarch.

Mr. Roosevelt threatened "woe or even worse for anyone who did not sanction" his agenda, according to Shlaes' The Forgotten Man. Further, he added, one of the groups whose cooperation would be required was the Supreme Court, because the voters had made it clear they would "insist that every agency of popular government"  the court included  "use effective instruments to carry out their will."

An astounding disregard for the "checks and balances" by which the founders had intended for the three branches of government to balance each other.

Shortly thereafter, FDR proposed to expand the Supreme Court  or pack it with new members  stack it with his appointed acolytes  so as bend it to his will  thus making the judicial branch of government nothing more than a branch of his fiefdom. That was where this power-mad president got his comeuppance. The same people who elected him saw right through it, and the popular uproar was such that ultimately, he had to concede this ploy would not fly. Roosevelt lost the battle but won the war, as the recalcitrant justices one by one retired or backed down.

Roosevelt did not even bother to acknowledge the separation of powers. 73 years later, Obama paid lip service for such power separation, but then encouraged a mob pile-on as attempted intimidation. 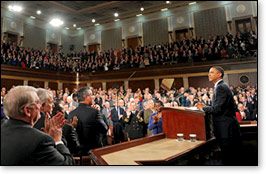 There were, of course, other unseemly and high-handed segments in President Obama's SOTU speech the other night. Such as  making easy whipping boys of the lobbyists (most of whom are engaged in honorable pursuits representing legitimate interests of millions of Americans)  only to turn around the next day and invite those same lobbyists to secret White House discussions of the issues.

As one of them put it in a comment to The Hill newspaper, "Bash lobbyists, then reach out to us. Bash lobbyists [while] I have received four Democratic invitations for fundraisers." Translation: Pay up or we'll bash you again, and retaliate in other ways.

Ah yes, change! Isn't it exhilarating? Next time, send the constitutionally-required State of the Union message by e-mail.