Because of illegal immigration, eighty-two-year-old widow Theresa Murray was a prisoner in her own home in Douglas, Arizona  a town of about 18 thousand near the Mexican border. The great-grandmother was living in the Arizona desert where she had grown up.

When she was visited by Patrick Buchanan  then researching for what would become The Death of the West  the author found a house surrounded by a seven-foot chain link fence 'that was topped by coils of razor wire." All doors and windows at the house had bars on them and of course, Mrs. Murray's home was wired to an alarm. She could not leave the house without having someone there to watch it.

Mrs. Murray informed her interviewer that she sleeps every night with a .32-calibre pistol on her bed table. She had been burglarized thirty times. She lacked the protection of her guard dogs that had been killed after someone tossed meat containing chopped glass over the fence.

Within recent weeks, living under the threat 24/7 put Arizonans' famous hospitality to the ultimate test. Finally they said  That's it. We won't tolerate this anymore, and passed a law to enforce laws that the feds refuse to enforce.

Robert Krentz, another rancher  also of Douglas  was killed on his property on March 27. Neighbors worried that his homicide was connected to the increasing border-related violence. The victim had been out checking the water line and fencing on the land his family had owned since 1907. 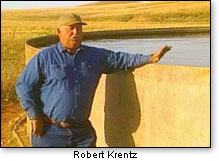 Robbery, vandalism, and drug smuggling have always been part of the illegal immigration problem in Cochise County. Though murder in those dangerous environs was not unheard of, it was something that cattle ranchers never expected to happen to Robert Krentz.

In 1999, Krentz and his wife told a news reporter that their ranch had been broken into and robbed of $700 worth of items. "And you know," he said, "if they [had] come in and asked for water, I'll give them water. You know, that's just my nature."

The 58-year old property-owner was known as a Good Samaritan who often brought water and helped injured illegal immigrants who tried to cross the desert in an area where summer temperatures often hit 120 degrees.

Sheriff's deputies followed foot tracks approximately 20 miles south to the Mexican border. "We are assuming he escaped into Mexico," according to Sheriff Larry Dever.

This is no isolated incident. The people of Arizona are upset that the federal government is doing nothing to secure the nation's borders. President Obama sits in his secure quarters at the White House, peers down his nose at the people on the ground near the border, and presumes to sit in judgment that Arizonans would dare pass a bill to enforce a federal law that has been on the books for decades.

The idea that foreign nationals must carry some ID as to who they are and certifying their legal right to be here is hardly new. If the president does not like the law that Arizona has passed, then why doesn't he use federal power to enforce the very law the state is taking into its own hands? He is doing nothing about building a fence at the border  a project that President Bush started (with some reluctance). Who is he to tell Arizonans they cannot defend their community against violence, robbery, and murder? Who can blame Arizonans for protecting themselves when the feds refuse to do it?

The unmentioned factor in all this is that the president and the Democrats see illegal aliens as future voters. No other explanation for Obama's failure to act makes sense. And some Republicans  sorry to say  are not much better. Campaign donors see illegal aliens as cheap labor. And if this double play leaves you out of a job, or if a loved one is murdered on his or her own property  well, gee that's tough. Politics and slave labor must take precedence  let's get our priorities straight, after all. (And they wonder why Tea Party people are angry.)

On Saturday  "May Day" (as honored by every Marxist/Leninist/Fabian of all socialist hues from the simply humorless to the plain evil)  was marked by anti-American demonstrations all over the country. The Arizona state capitol had already been the scene of marches wherein the Mexican flag was waved, along with placards comparing Governor Jan Brewer to Hitler.

Speaking of which: Mexican President Felipe Calderon has weighed in, labeling the Arizona statute an inducement to "intolerance, hate, discrimination, and abuse in law enforcement."

Oh horrors! Obviously such indictments must not be dismissed out of hand. Let us see if the Mexican president's concerns can be dealt with post-haste. So, Mr. President, what examples of "intolerance, hate, discrimination, and abuse in law enforcement" are we talking about here?

Mr. President, are you talking about provisions that forbid any tinkering with the so- called "equilibrium of the national demographics?" You're right  sounds discriminatory to me...can anyone say "profiling?" What about an injunction against those strangers whose presence would mess up the nation's "economic or national interests." Dear me, how beastly! And they even give the boot to those who have a criminal record? Be still, my heart! And did you know that one can get two years in the hoosegow for entering the country illegally? Try that a second time and you're likely to end up with a ten-year revisit. Oh, pass me the smelling salts!

And here's the part that's r-e-a-l-l-y over the top: You won't even be able to hire a trial lawyer to make a career (along with TV camera fame) by bringing you back to court over and over again in hopes of overturning your case and letting you stay. And if you show up and start sounding off about any violation of your free speech rights, be aware that is also forbidden. And any native-born citizen of the country can make a citizens' arrest of illegals, and turn them over the gendarmes.

Oh, Mr. Presidente, I am so sorry. I know you would eschew being compared to Hitler or being Nazi-like. So I am certain that tomorrow morning  first thing  you will be rushing to Mexico's parliament to demand that this "draconian" set of laws be abolished so that Mexico can  all together now  "show the world" its tolerant nature...Don't worry, Mr. President. We civil libertarians will all be rooting for you  supportive every step of the way...It won't be hard since we all know your heart is in the right place. OK, Mr. President?......Mr. President?....Senior Presidente?...Hello?...Anybody home? Hello?

As for the Arizona law, let's deal with the most egregious of the lies: 1  "Carrying ID is new." Wrong: Since 1952, non-citizens have been required to carry an ID showing they are here legally. (BTW  When a grandson of mine was born in Belgium, he had to have his ID card in his diaper bag). 2  "Racial profiling will be encouraged." Wrong: The act expressly forbids it. Police will undergo training on this. If my late, white Swedish-born grandfather were alive today, he'd be subject to the same laws as our darker-skinned brothers and sisters. 3  "Police will stop people at random." Wrong yet again. The law only kicks in after the police have already arrested a suspect on another charge.

Just one week after Governor Brewer signed SB-1070 into law, five men suspected of smuggling drugs across the border ambushed and wounded a sheriff's deputy Friday in a remote area near Phoenix  the kidnapping capital of the world. So Arizona is on the front lines of a larger war. 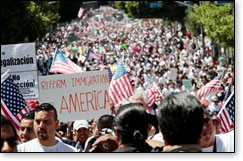 Mexico's war on the United States is motivated by the failure of its socialist system to offer its own people a sustainable life. Therefore, the real war is one of perpetual invasion  not a shooting war (though as we have seen, that option is sometimes employed and can be expected more frequently as the population balance becomes more conducive to it). As we outlined in Part 1 (linked above), the goal of Mexican authorities is "to export to the United States the foot soldiers of potential revolution to preserve their society's culture of corruption and privilege" (Mark Levin  Liberty and Tyranny)  and to re-take a huge swath of the U.S. southwest "block by block."

Powerful forces in Mexico, aided and abetted by public and private sources in the United States, continue to encourage the invasion. This is a war against the rest of us.