Wes Vernon
The congressional probe of Islamofascism: watered down? (Say it's not so, Pete)

January 31, 2011
With parts of the Middle East in flames (as I write), it is worrisome to contemplate the possibility that all the rioting in Egypt (however motivated by innocents) may end up as a reprise of Iran/1979. The Islamofascist regime that took over then was far worse than the strongman government it replaced.

We pay a price for that today, as Iran threatens the world with a nuclear holocaust, in turn reviving fears of Armageddon.

But will we fight them here?

Against that backdrop, it was heartening to learn that Rep. Peter King (R-N.Y.) plans to turn the spotlight of his House Committee on Homeland Security on the influence (real and attempted) of radical Islamism right here on our own soil.

Subsequently, Politico ran a story quoting Congressman King as saying he will not call as witnesses two of the foremost experts on the Islamist threat. Steve Emerson and Robert Spencer have lived under threats against their lives in order to document and expose the subversive activities of organized jihadist Islam in our midst.

While disappointed, this column held back from the kind of concerns expressed by credible colleagues such as Diana West and my good friends Richard and Susan Freis Falknor that questioned whether the Long Island lawmaker might be "abdicating." Knowing the congressman's "Damn the torpedoes" record, we awaited his explanation.

Over the weekend came an explanation that raised more questions.

Spencer, in his Human Events column, reported that the King committee planned to call Rep. Keith Ellison (D-Minn.) to testify. Ellison, Congress's only Muslim, is cited by King as having had "real life experience" with the issue.

But what does that mean? Ellison (as reported by columnist Pamela Geller) has been linked to pro-Hamas rallies, and has made a pilgrimage to the Middle East, which was paid for by the Muslim Brotherhood — the very organization that threatens to prevail in Egypt. That qualifies as "real life experience," but it's not clear Ellison, who thinks any investigation of radical Islam is ipso facto "Islamophobia," is prepared to tell the whole story.

So by this time, I still hoped for an answer to this "Say it isn't so, Pete" moment.

Thursday morning of this past week, Mr. King appeared on The Grandy Group program on Washington's WMAL Radio.

Host Fred Grandy's information on the Islamist extremist threat is not a fleeting, wave-skimming experience. His wife (whose radio name is simply "Mrs. Fred") has done tons of research on the threat of radical Islam, which she has shared with her husband's listeners for weeks.

"Mrs. Fred" seems to believe what this column has long feared — that whatever the mindset of individual non-violent Muslims, they are afraid to cooperate with law enforcement authorities lest the they pay with their lives at the hands of the jihadists — in accordance with a version of omerta — the "code of silence" often attributed to the Mafia.

It must be said that King's tone on the Grandy show was very much the old Pete "Damn the torpedoes" King signature that would assure many who are hoping for an effective investigation:

1 — Law enforcement officials have told him repeatedly they cannot get the cooperation of rank-and-file Muslims in probing jihad-related violence.

2 — Such lack of cooperation applies largely to official investigations of recruitment campaigns here by Al Qaeda.

3 — Those recruitment efforts came to the forefront in the shooting at Ft. Hood, the would-be subway bomber, and the Times Square bomber, as well as cases in Baltimore, Texas, Chicago, New Jersey, the Bronx, and Portland, Oregon, to name a few.

4 — "They [terrorist recruiters] are picking people who are underneath the radar screen, people who are living here legally, which is all the more reason we have to have the support of people living in this community to let us know." (My comment: Yes indeed, and doesn't that argue for some "profiling?" Just asking. See last week's column.)

5 — In Minneapolis, Somali Americans had been recruited to be suicide bombers. The FBI began an investigation, "and imams in the mosque instructed their people not to cooperate." What's worse, according to King, "I don't know of any other imams or Muslim leaders around the country who denounced that or who came forward" and urged cooperation. 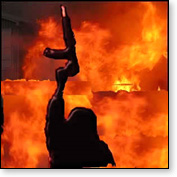 6 — A Pew Research poll showed that 15 percent of American Muslim males between 18 and 29 "could support suicide bombing here in the United States" and expressed a willingness to take up arms against their country.

7 — The Council on American Islamic Relations (CAIR) is falsely considered "mainstream" even though it was named "an unindicted co-conspirator" in a "terrorist Holy Land Foundation case."

8 — The CAIR office in San Francisco had issued a bulletin urging its members not to cooperate with the FBI or any law enforcement in Muslim-related probes. CAIR headquarters here in Washington urged its San Francisco office to stop using that poster, but only "out of an ever-abundance of caution."

9 — With regard to the Muslim Brotherhood, Mr. King will "certainly have witnesses commenting on them and analyzing them and showing the concern that I think we should have about them."

10 — "It's clear there are more radical Muslims" in the United States as apparent by the increasing number of cases of "active attacks" that have been stopped at the last minute.

11 — When Grandy noted in the radio interview that "it's a lot easier to be a Muslim in the New York or London than it is to be a Christian in Cairo or Tunis," Congressman King added, "In fact Muslims [themselves] do have better lives here than in their own country where they came from."

So the congressman is not unaware of the dangers posed by Islamofascism. The New York Times, Time magazine, the Washington Post, and longtime communist mouthpiece People's World (and other usual suspects) are piling on to besmirch King before the hearings even get started.

This column is sorry King won't call Spencer or Emerson to testify. Nor apparently will he call other experts such as Daniel Pipes or Frank Gaffney, according to a comment the congressman made (apparently to Spencer). "If I can get people from within the Muslim community to talk about the radicalization, that is a lot more effective."

If the chairman wants to call witnesses with "real life experience," we suggest he consider including the testimony of Ayaan Hirsi Ali, the Dutch parliamentarian whose breakaway from Islam (to escape an arranged marriage) put her life in danger to the extent that she went into hiding for many years, and was here in the U.S. for several months.

Reading some of Ali's books would prompt any congressional staffer to suggest a number of questions that could be raised at the hearing by Congressman King or any member of his committee wanting to know to what extent radical Islam threatens the personal security of every American.

Not a sermon, Congressman. Just a thought.