Wes Vernon
What does it take? Another victory for the enemy within

March 7, 2011
Let's cut to the quick: Two more broadcast commentators dared to speak out on the infiltration of our society by the Radical Islam/far left coalition whose fondest hope is to bring us down, tear our Constitution to shreds, and rule from the White House.

What we need to do as we witness this attack from within right before our eyes is to repeat — again and again and again, if necessary — that our very survival (as a nation, and possibly personally, as well) hangs in the balance.

On Wednesday of this past week, on the Grandy Group morning program on Washington's WMAL-AM, host (former Congressman and TV star) Fred Grandy made the following announcement:

"You know, for the last [few months] my wife — whom you know as Mrs. Fred — and I have stressed repeatedly the threat of Radical Islam in this country and around the world. Well, last week we were told to tone this down, and Mrs. Fred didn't do that, and neither will I. We've been told that we talk about this too much, but it is our very strong belief that you cannot talk about Radical Islam enough. Now obviously the management of this station disagrees. So — to be continued, and if you want to talk to me about it, it's FredGrandy@verizon. net.

At the time this is written — during the weekend, Grandy had been off the air on Thursday and Friday. On Thursday, WMAL management issued a terse statement that Grandy himself has stated his "intention" to resign his position. The murky announcement suggests the lawyers are arguing over "resign vs. fired," and what are the legal ramifications one way or the other.

Grandy withheld comment to the mainstream media, but as best we can figure, the Grandy Group has been told to direct its on-air attention to more mundane matters such as "bicycle paths" in the suburbs, as if we were living in a revived "gilded age."

As we reported last week, the heat was already on the husband and wife radio team. As "Mrs. Fred" stated then, "And if I don't return next Friday, you'll know that CAIR [Council on American Islamic Relations] has successfully put pressure on WMAL, and Radical Muslims will have won. I'm not kidding."

CAIR — just another day at the office?

In fact, most of the dirty work in targeting broadcast talkshow hosts who speak candidly on this topic has indeed been done by the likes of CAIR. Of course! If you were an "unindicted co-conspirator" in a money-laundering case involving the Holy Land Foundation, you would want to shut up anyone who dares expose your dirty laundry (figuratively and monetarily) too.

CAIR denies involvement this time, after having boasted about responsibility for the ouster of host Michael Graham from WMAL over the same issue in 2005. (See last week's column.)

Mrs. Fred — if anything — has come up with even more damning information on the Islamist threat than did Graham. If CAIR wanted Graham axed, they would be apoplectic about the Grandys. A lot of new information on the deadly (a term not used lightly) internal threat has emerged in the intervening six years.

A threat aimed directly at you, America

This is not mainly about Grandy and his wife Catherine, though they have a legitimate case to make that their rights under the First Amendment have been violated — in spades. Their plight should make their case a cause célèbre for every patriot who gives a damn about the fate of our America as we know it. (For those in the Washington area, demonstrations have been planned for Monday and Tuesday at WMAL at 4400 Jennifer St. NW 20015 to call out the station for its muzzling of commentators who expose the truth about Radical Islam. You can also call station officials at 202-686-3100. Some will tell them they'll no longer listen to WMAL unless and until management brings back the Grandys and allows open discussion on the Radical Muslim threat.)

But here is the larger picture

We are under siege from Radical Islam and the Hate-America Left. What unites them is their white-hot contempt for America.

The Hate-America Left has been in a snit ever since the end of the Cold War. These people loathe and despise Ronald Reagan precisely because he ended the Soviet Empire. Apparently they see Radical Islam as their hobby-horse opportunity to bring down America. One can guess which element of that coalition is the exploiter and which the exploited.

Radical Islam for years has harbored the ambition to rule the world. Jane's Islamic Affairs Analyst (2009) quotes a leading Islamic terrorist sponsor as declaring that "in order to reach the ideal Muslim society, every method and path is acceptable (including) lying to people."

I have before me a 352-page report titled Shariah: The Threat to America, issued by the Center for Security Policy. The report's authors have impeccable credentials on the subject — including backgrounds with the FBI, CIA, DIA, Joint Chiefs of Staff, military as commander, security affairs author, columnist. We're looking at multiple thousands of hours of study, research, and one-on-one professional experience.

The CSP introduction reads (in part) as follows:

"Translated as 'the path,' shariah is a comprehensive legal and political framework. Though it certainly has spiritual elements, it would be a mistake to think of shariah as a 'religious' code in the Western sense because it seeks to regulate all manner of behavior in the secular sphere — economic, social, military, legal, and political."

On one side of the Muslin divide are those "whose members embrace reason and in particular, the separation of the spiritual and secular realms."

It is on the other side of the divide that Shariah and its practitioners pose a fight to the death. They are the Islamists. Again quoting:

"Like erstwhile proponents of Communism and Nazism, these supremacists — some terrorist, others employing stealthier means — seek to impose a totalitarian regime: a global totalitarian system cloaked as an Islamic State and called a caliphate. On that side of the divide...shariah is an immutable, compulsory system that Muslims are obliged to install and the world required to adopt, the failure to do so deemed a damnable offense to Allah. For these ideologues, shariah is not a private matter. Adherents see the West as an obstacle to be overcome, not a culture and civilization to be embraced, or at least tolerated. It is impossible, they maintain, for alternative legal systems and forms of government peacefully to coexist with the end-state they seek." 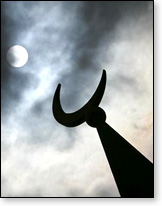 Now, can we agree that when a Fred Grandy (with a record of integrity as a former lawmaker and talent that brought him success in Hollywood) puts his wife on the air to impart the volumes of research she has been doing on this subject, he isn't risking his career simply because he's a misguided "Islamophobe"?

Now, can we agree that when groups such as CAIR try to shut up anyone and everyone who raises his head to speak out on the most deadly ideology to threaten Americans in our nation's history, the enemies of free speech are not doing it because of genuine concern over "Islamophobia," but rather because they are afraid? Afraid — that Radical Islam's plot will be exposed for what it is — a war against Western Civilization.

How about the "Death to America" cry heard in some American Mosques? If we merely point that out, does it make us A — crazy, B — hatemongers, or C — paranoid?

What happens if suicide bombers or "soldiers of Allah" are found to be heading down Pennsylvania Avenue toward the White House? Think CAIR would allow us to notice?