Wes Vernon
Oklahoma City Bombing - the return of "the third terrorist"
But will he get away again?

March 24, 2011
So it's really no big deal when a guy is arrested for slugging another guy with a beer bottle, right? In this case, wrong! Police in Quincy, Massachusetts (a part of the Boston metro area), earlier this month jailed a beer bottle brawler who turns out to be a credibly accused terrorist — on the lam for the last eight years. This revives the case of what arguably is the biggest cover-up in our nation's history. 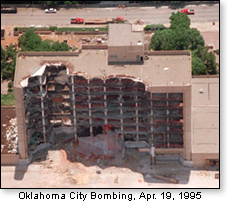 The substantial thickening of the plot comes when we consider that some very powerful people likely are hoping the accused beer-bottle attacker, Hussain Al-Hussaini, will just disappear, as he did in 2003 after two failed attempts to clear himself in court. Reporter TV journalist Jayna Davis had indicated his complicity in the Oklahoma City bombing in 1995 that killed 171 people, including children — born and unborn.

This column has attempted to get some feedback from the FBI and the U.S. Department of Justice: Why is it that the FBI now says — according to the suburban Patriot-Ledger of Quincy — that Al-Hussaini was "thoroughly investigated" and "found to not have any role whatsoever in the attack" on the Murrah Federal Building.

That is astounding to Davis, who spent eight years gathering evidence pointing to Al-Hussaini's involvement in the mass murder. It's especially astonishing, she tells this column, considering that federal investigators "failed and/or refused to thoroughly investigate the eyewitness testimony, and solid corroborative evidence, that directly implicates Hussain Al-Hussaini in the commission of the crime."

So what's turned the FBI position?

So this writer called the FBI and DOJ (Dept. of Justice) to find out how authorities — who for years ignored the evidence in the case — can now say Al-Hussaini had nothing "whatsoever" to do with the attack, even though as of 2004 they had never even interviewed him.

The first person we contacted was Special Agent Greg Comcowich — spokesman at the FBI Boston office — to find out when, how, and where the FBI had "thoroughly investigated" Al-Hussaini and concluded he was clear of any guilt in the 1995 attack.

Agent Comcowich was very courteous and cooperative with us. "This was before my time," he explained. He referred us to FBI headquarters in Washington, and told us to get back to him if we had any trouble getting through.

In the Washington FBI office, an unidentified spokesman who answered the phone said, "Oh. That's not the same guy. I don't believe it's the same guy...Hold on a minute..." 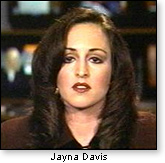 (Let us interject here and lay that one to rest: Having seen Al-Hussaini's mug shots, Davis positively identified him as "the same guy." After his arrest, according to the Patriot-Ledger, the former KFOR-TV (Oklahoma City) reporter asked a Quincy police detective if the man the cops had nabbed in the beer bottle attack had a tattoo of an anchor with a snake wrapped around it. He did. She said the anchor-and-snake tattoo was common among members of a branch of the Iraqi army of Saddam Hussein.)

After leaving me on hold for several minutes, the FBI Washington spokesman returned, and without saying a word immediately put me into a voice-mail where I repeated the inquiry, explaining the exact information I was seeking, and asked for a return call.

After two days, nothing.

I then took Boston FBI Agent Comcowich up on his offer to get back to him if I came up empty-handed in the Washington inquiry. It has been another two days and there is no response as of this writing (Wednesday PM).

Eric Holder's Justice Department similarly gave me the e-mail address of a spokeswoman who — after two days — failed to respond.

Hussain Al-Hussaini is now in a Quincy jail — last we checked — accused of slashing another man's face with a broken beer bottle. The victim of the attack suffered a large laceration requiring forty stitches and had to be taken to the hospital. Al-Hussaini reportedly told police he did this because he was being harassed by other men in a homeless shelter due to "his role in the Gulf War."

He was arraigned in Quincy District Court the day of his arrest. His next court appearance — again, last we checked — is slated for Monday, March 28.

Here is what is at stake: This man should not be free another day until the authorities do their job and really "thoroughly" investigate the case and prosecute it. The feds have all of Davis's evidence including 22 witnesses who saw him with Timothy McVeigh (later convicted) during relevant hours on the day of the Oklahoma City bombing.

As Davis reported facts implicating Al-Hussaini, he tried twice to sue the reporter for defamation — first in state court, then at the federal level — and both times failed. Her evidence against that man has been found in a court of law to be "undisputed," and her reporting did not display "a reckless disregard for the truth."

When Mr. Al-Hussaini appears in court Monday, under no circumstances should he be released — on bail or otherwise. He is obviously a flight risk, for reasons unrelated to the charge of attacking a homeless man with a beer bottle. The public interest demands that the judge in the case be informed of the much larger issues here and give due consideration thereto. I'm not a lawyer, but hopefully someone in that courtroom who is can see what's at stake here.

Who knows why the feds have gone out of their way to ignore the evidence against Al-Hussaini? "Political correctness" (his Middle East origins)? Perhaps authorities didn't want to face the implications that such an attack — if it involved a foreign power — was an "act of war"?

As we write, it is plausible that somebody — or somebodies — are sweating this out. They would love to see Mr. Al-Hussaini disappear — just as he did after reporter Jayna Davis was given high credibility in two courts — state and federal. 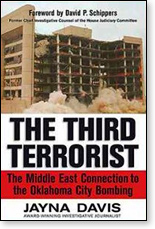 What do you suppose are the odds that we eventually will see a court haul in some authoritative person or persons to answer as to why their refusal to follow multiple credible leads in this mass murder should not be considered a case of dereliction of duty?

"The Third Terrorist" (title of Davis's book on the case) returns — the other two being McVeigh (executed) and Terry Nichols (serving life, and authorities have blocked attempts to interview him).

We're not done yet. More next column. There is much more at stake here than a brawl at a homeless shelter.