Wes Vernon
When a cop goes over the top: more on the Lanigan case

As more details emerge in the case of false accusations against Fairfax, Va., elementary school coach Sean Lanigan, it becomes relevant to add more perspective to what we wrote on May 16. This is necessitated by the fact that Washington Post reporter Tom Jackman has added details to his original story of the lies about Lanigan's supposed inappropriate liberties with a minor. Those facts (previously unknown to us) prompt a revision to our own Monday comments.

Our main focus here is on a police detective who reportedly threatened reprisals against those significant players in the case who offered versions of the story that differed from her own.

Some of our readers have asked if there is a way they can help the now poverty-stricken Lanigan family, whose lives have been ruined. An account for the Lanigans has been created by a family neighbor:

Now about the over-the-top cop

That brings us to the behavior of Nicole Christian, lead detective in the case.

1 — Detective Christian and her sidekick Rich Mullins posted on the Internet "numerous physical and behavioral indicators" that a minor has been sexually assaulted, none of which Lanigan's 12-year-old accuser appeared to have.

2 — Nonetheless, the detectives add, "Believe a child who tells you about sexual assault!"

That flat, no exceptions-sounding statement begs mention of authorities we quoted Monday who say that federal legislation has inadvertently created — and to this day funds — "a virtual child abuse industry" wherein there is money to be made by bringing greater and greater numbers of charges.

As we pointed out, a respected authority on this issue — Columbia University professor Dr. Richard Gardner — has described a network of school employees, mental health, law enforcement officials that encourages child abuse allegations "whether they're reasonable or not."

Note: This is not to accuse all of the above professionals of trying to set up nice little nest eggs for themselves by inflicting undeserved misery on others, but the infrastructure is there for any of the (hopefully) very few (ideally none) who are so tempted — a little bit like saying to pre-disposed corner-cutters, "Don't think of pink elephants."

Don't confuse me with facts?

3 — Staff and parents tried to present Detective Christian with facts contradicting the path her "investigation" was taking. Detective Christian — who is in a profession that requires round-the-clock open-minded curiosity — thanked them for the information by threatening to prosecute them for "obstruction of justice," according to comments staffers made to reporter Jackman.

4 — When a close friend of the 12-year-old accuser tried to recant her story, Detective Christian told her not to do so, explaining, "If she changes her story, they're going to wonder why she changed her story." (Well, yes, that's right. Maybe they will suggest she lied the first time, and we wouldn't want to spoil a detective's neat and supposedly ironclad case, now, would we? Especially when it was not really ironclad: the original accuser recanted the story too.)

5 — Christian and an assistant tried unsuccessfully to talk to the mother of the accuser's close friend in a court hallway. The girl then joined the accuser in recanting her story. Did the mother simply not want to risk the wrath of someone she viewed as a bully?

6 — Not long after that (barely avoided) encounter, Fairfax County launched a probe of alleged misbehavior on the part of the mother's boyfriend. The witness's mother was cleared of any wrongdoing. She and her daughter have since moved from the area.

7 — The accuser placed on Facebook a rationale for the recantation. We herewith reprint it (minus her heavy use of abbreviations):

"It was a joke, though like always he picks up girls as a joke. I feel really bad. No I swear I didn't want to go this far. (And at the end) I thought he would just get a warning, but no."

Silence. The voice of authority has spoken

8 — Here are some quotes and attitudinal observations regarding Madame Detective — as quoted by Jackman:

B — Reportedly, the detectives were not impressed with Coach Lanigan's clean prior record. That record cut no ice with them because every criminal has to start someplace — and for that matter, first offenders commit murder.

Let us hereby cite that as reason enough not to be swayed by reports that "Detective Nicole Christian has years of experience investigating child abuse and is well-respected in her field." Obviously, as also reported, "Questions remain" about Christian's judgment in this case.

Moreover, when a cop with a clean record steps over the line, there has to be a first time, or starting "someplace." There are laws and ordinances on the books to protect a citizenry from abusive law enforcement officers. And remember, first offenders commit murder.

Lest there be any misunderstanding, the transcript of the accusers' under-oath recantation follows:

Q — Did you ever tell anybody that he was lying on top of you?

Q — You ever tell the police that?

Q — Why did you tell them he was laying on you?

Q — but that didn't happen, correct? 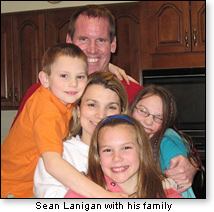 Previously, we suggested in this space that disciplinary action should be considered for Detective Christian, including demotion or dismissal.

The above information that we did not have in Monday's column prompts a revision: We are now convinced that such a hearing should be confined to dismissal — whether she should be stripped of her badge. It appears she has badly abused her authority.

Just one caveat: Madame Detective should be accorded more fairness than she was willing to grant Coach Lanigan (or others she viewed as getting in her way). Most understand the rule of the "presumption of innocence until convicted," even if those very words may not be in Detective Christian's vocabulary.

Where is the American Civil Liberties Union (ACLU) in all this? That group is willing to give unending breaks to mass murderers at Gitmo. By contrast, we have seen nothing indicating ACLU officials have raised so much as a peep in protest of this obvious miscarriage of justice. (If we just missed a story on that, we will of course stand corrected).