Wes Vernon
You're illegal in Maryland? you go to the head of the line; you're legal? just pay the bill

May 23, 2011
Our signatures on the petition went out with Friday's mail. All we did was urge the state of Maryland to put a new ill-advised "special interest" law before the voters. Let them decide whether it remains.

The state legislature passed — and Governor Martin O'Malley has signed — a measure that allows illegal aliens in the state to pay significantly lower in-state tuition at Maryland state-supported colleges and universities. And so, the over-taxed citizens of this high-tax state are circulating a petition to put the issue on the ballot.

The reality of course is that illegal aliens — by definition — are from "out of state." But at the same time, there are American citizens from every one of the other 49 states who are not only legal, but — under Governor O'Malley's bill — required to pay the full out-of-state tuition if they wish to go to school in Maryland.

That is a simple case of How to Reward Law-Breaking 101.

(Yes, I know the mealy-mouthed Orwellian nomenclature is "undocumented." The issue is: Why are they "undocumented?" Because they're illegal. How do you say that in Spanish? Not that hard. Just drop one "L": ilegal.)

Illegals are often referred to as "undocumented immigrants." Even the word "immigrant" as applied here airbrushes reality out of the discussion. It is unfair to lump the law-breakers who are here illegally with those immigrants who came here through the lawful U.S. immigration system. Of all the world's nations, the U.S. welcomes the most legal immigrants. We are a nation of immigrants.

The movement to reward law-breakers with an education provided by legal taxpayers and legal out-of-state students has been going full force for several years — fueled largely by radical illegal alien groups whose leaders know exactly what they are doing — acting as enemy collaborators in what amounts to an invasion. Some of them — in an unguarded moment — have vowed to "take back" America "block by block."

It's against the law, plain and simple

Federal law states that "an alien who is not lawfully present in the United States shall not be eligible on the basis of residence within a state...for any post-secondary education benefit unless a citizen or national of the United States is eligible for such benefit." 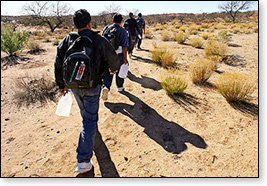 Read that again. What it means is that American students who pay out-of-state tuition to colleges and universities where illegal aliens receive in-state tuition would have a plausible basis to sue the school for reimbursement of the tuition difference. In fact, the organization Friends of Immigration Law Enforcement is urging out-of-state legal students to do just that.

The federal law makes no exceptions. Every governor, legislature, or college president who implements a policy that conflicts with federal law and prevents the police from enforcing that law is in violation.

Moreover, we're not talking about "youngsters." The illegal students in question are 18 or nearly 18, and thus are adults whose parents are also illegal aliens.

The message to foreign students who apply for entry to the school the legal way is that they are suckers for not becoming illegal aliens so they can enroll for a cheaper tuition.

The old tired refrain is that illegal aliens can provide "diversity" and that "we can learn from them." Learn what? How to break the law?

Our university systems are not parochial, isolated shells of the provinces. They allow — usually encourage — entry of foreign students who come here (legally) seeking what our institutions of higher learning have to offer in such fields as medicine, engineering, business, and international commerce. "Diversity" of the ethnic and racial variety we already have in abundance.

Moreover, the "diversity" chestnut would carry more credibility were it not for the fact that intellectual "diversity" in the faculty lounges of most campuses is virtually extinct. Arguably the political climate there is more lopsided on the political far left than it is even in the newsrooms of many mainstream media outlets.

This column has not done an in-depth study of the financial condition of all the states that have granted in-state tuition to illegals — only noting that Illinois felt compelled to raise its income taxes by 66 percent, and corporate taxes by 45 percent. New York is a fiscal basket case; California is bankrupt in nearly every sense but formal declaration. The other in-state tuition states are Washington, New Mexico, Texas, Oklahoma, Utah, Kansas, and Nebraska. 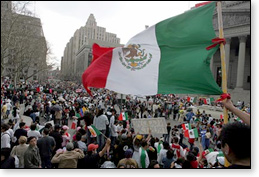 The illegal alien population in Maryland is around 300,000, according to the Pew Hispanic Center. It has been estimated, based on publicly available records, that the total cost of educating illegals in the state is at $1.2 billion a year. Add to that a rounded-out figure conservatively at another $200 million for illegals' health care and incarceration of the criminals among them.

Maryland has an estimated "structural deficit" (as one conservative activist worded it) of $1 billion. By those figures, the state would actually have a surplus were it not for the costs attributed to illegal aliens.

That, of course, adds another argument against illegally giving illegals in-state tuition. We cannot afford it.

Shut up and pay the bill

The public heat over this issue prompted one outraged liberal to write a complaint to a local paper about the "Foxification" of our local media. (If only!)

It seems an all-news station — while reporting on the petition drive to put the in-state tuition issue on the ballot — also, on its website, linked to the website of the petition circulators. The radio station undoubtedly was merely pointing out where the petitioners could be located so as to avoid being bombarded with inquiries from listeners wanting to know where they could sign.

The letter-writing complainer whiningly asked, "Can anything be done?"

Well, yes, ma'am, something in fact can be done. You can merely exercise your right to refrain from signing the petition. Trust me, if anyone tries at the point of a gun to force you to affix your signature to the petition against your will, I would gladly dial 911 for you, were I in a position to do so.

Some of us already feel put upon by a legislature that rammed this bill through without caring one whit about what the mere taxpayers think of the idea. Adding insult to injury is that anyone would bring pressure to deny us the basic right to petition our government, while expecting us to shut up and pay the bill.

If you are a registered voter in Maryland or know someone who is, you can gain access to the petition against in-state tuitions for illegals by e-mailing Delegate Neil Parrott at MDpetitions@gmail.com

Wherever you live, you can go to the website Numbers USA, and consult a list of things you can do to deal with this whole illegal alien problem.