August 4, 2011
"I love you guys," House Speaker John Boehner is reported to have said at a meeting with the tea party freshmen. 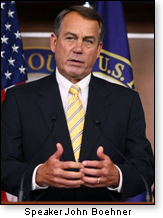 That comment despite the fact that those same men and women who came to this city to "change the way Washington works" gave the Ohioan a hellfire test of his leadership in the debt ceiling debate.

The tea party caucus has been described as "rambunctious" for its refusal to "go native," or to abide by the rules of Sam Rayburn, one of Boehner's long-ago predecessors, who said, "Around here, you go along to get along." Those days are gone in the House, hopefully forever.

For all the headaches they have given him in recent days, Boehner can identify with the rebellious ethos of the tea partiers.

No doubt the speaker recalls his first days in the House in the class of 1990 when — as the Almanac of American Politics puts it — "he was a rabble-rousing reformer." Boehner quickly joined the "Gang of Seven" young freshmen who named all 355 members who'd had overdrafts at the House bank, a scandal that blew the lid off a cozy little arrangement whereby members abused their subsidized banking privileges. Boehner's "gang" infuriated some House veterans in both parties, but struck a chord with the public.

Now, after two decades, John Boehner is himself a "House veteran," in charge of a majority caucus intellectually fueled by populist newcomers who, in the view of the Washington establishment, are — well — "rabble-rousing reformers." (In other words, "They won't allow us to spend any money" — an exact quote. Imagine that!)

Most of them had no problem following the speaker's lead on the Cut, Cap and Balance bill, wherein official Washington went berserk at the very idea that these "extremists" would entertain the wild notion that government should not spend more than it takes in. You know, just like the household in which John Boehner grew up as the second eldest of 12 children in a family where his father ran a small café and bar.

Last week, the speaker had to postpone a vote on the so-called "Boehner Bill," which was to be the GOP House's input at negotiations with the White House and the Democrat Senate.

In order to convince enough tea partiers to put the bill in the winning column, he added a budget balancing constitutional amendment, the same provision that the House of Lords — I mean Harry Reid's Senate — had rejected in Cut, Cap and Balance without so much as a minute of debate in the alleged "world's most deliberative body." Quick work for a Senate whose "leadership" had not produced a budget of its own in over 800 days.

So the Boehner bill, with the budget balancer revived, passed the House 218-210. Just enough tea partiers voted yes to squeak it by. 22 of them still voted no, mainly because it still raised the debt ceiling, which they saw as a license to spend more money we don't have.

Some conservative editorial writers — including our friends at the Wall Street Journal — opined that by leaning on the speaker to add this (already Senate-rejected) provision, the tea party freshmen weakened their leader's hand in negotiations with Reid and the White House.

One begs to differ. The freshmen who agreed to support the speaker's bill only after adding the balanced budget issue actually strengthened Mr. Boehner's hand. Though the earlier budget balancer in Cut, Cap and Balance had been summarily spurned by Reid's poodles in the Senate Democrat majority, bringing it back yet again — this time in the negotiating measure — signaled that the House was steadfast in its insistence on certain basic common-sense principles.

From that, Speaker Boehner's strengthened position reverberated through this city's entire negotiation "sausage factory," even though the Republican House was only one of three parties at the negotiating table. (Well, maybe two negotiators if you consider that President Obama, as even the New York Times has noted, had been sidelined as a virtual bystander.) 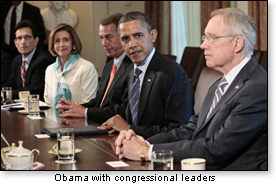 Ultimately on Monday, the House voted for the "compromise" legislation that ended up with no tax increase, a big win for the Republicans, and laid the groundwork for a Balanced Budget Amendment. (The Senate followed suit next day.) There are instant spending cuts coupled with a super committee to impose further debt reductions in November for an up or down vote.

That 12-member panel would consist of six Democrats and six Republicans, three picked by each of the party leaders of the House and the Senate. A simple majority — a mere 7 — would send its recommendations to both chambers for an up-or-down vote — again by a simple majority.

We can hope for meaningful cuts. Liberals, including the president, are hoping for tax increases. That is why this column recommends that Speaker Boehner consider appointing to the panel the likes of Paul Ryan, Jim Jordan, and Michele Bachmann. In the Senate, GOP Leader Mitch McConnell would do well to consider Marco Rubio, Jim DeMint, and Rand Paul.

Some tea partiers — in and out of Congress — believe in the end, the measure will prove to be a path to higher taxes, and thus a net negative. They may be proven right. Political winds can turn on a dime — which is why the nation will be best served with tough low-taxers — such as those mentioned above — on the GOP side of the super panel. A former mayor of Obama's hometown in Chicago-land once said "Politics ain't bean bag." Republicans will deeply disappoint if they appoint bean bag athletes to the super panel. This is a contact sport.

Both chambers will likely cast their own votes on the super-panel proposals sometime in December. Liberals complain this would ruin Christmas — not to be confused with their own forced Senate vote on Obamacare on Christmas morning of 2009. See? Reid's budget-avoiding House of Lords can actually vote when bankrupting the country demands it.

Nonetheless, the debt ceiling bill that just passed is of course, not enough. Not even close if we're serious about removing the terrible burden that threatens our future generations. Alas, that can only be remedied by the 2012 election. 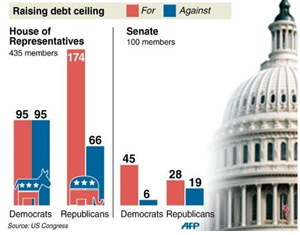 The final House vote on the measure was 269 to 161, with 174 Republicans and 95 Democrats voting aye. 95 Dems (mostly far left) and 66 Repubs (mostly conservatives, including some of the freshmen) voted no. (The Senate total was 74-26.) By one House count, 43% of the tea party Republicans voted no. That means 57% voted yes. How many more examples do we need that the "Tea Party" is no monolith?

An old languages professor in high school told me at a tender age that "tension is power." By that yardstick, the tension between Speaker Boehner and the tea partiers has led to this result: a substantive potential beginning of serious debt reduction — no one kids himself into thinking it is more than that. But what they got was 1 — far more than the "clean" debt ceiling hike Obama wanted; 2 — a real vote in the Democrat Senate on the tea party's playing field; and 3 — the House Democrats split straight down the middle, 95/95.

With control of only one-third of the negotiating table, the tension between Speaker Boehner and the tea partiers has accomplished what only weeks ago would have been considered a political miracle.

My old prof was right. Tension is power.