September 1, 2011
Ho hum. Another conservative presidential candidate is trashed by the civility-talking media.

Rick Perry shoots to the top of the polls just days after entering the Republican field, and in no time, he gets the "he's stupid" treatment accorded Ronald Reagan (whose predecessors were not smart enough to figure out a way to bring down the Soviet empire or how to usher in two decades of unprecedented prosperity.)

Although this column is not — at this time — endorsing any candidate, we are periodically examining the ideas and performances of those in the running.

Those ideas? Brace yourself for change

The tough-talking Texan's record as governor, as well as his fearless rhetoric, should be heartening for many conservatives. Most of his ideas are right on, though one or two of them raise questions or could use some tweaking.

For our purpose here, we will focus on those ideas the governor has advocated that would require amendments to the Constitution. By our count, there are at least seven, as outlined in his 9-month-old book Fed Up.

Ridding the nation of the income tax was considered a radical idea when proposed in the fifties by the late Utah Governor J. Bracken Lee.

In more recent times, alternatives have been offered by the likes of former House Majority Leader Dick Armey and former Arkansas Governor Mike Huckabee. The latter campaigned on it in his 2008 presidential bid, calling for a "Fair Tax" (basically a sales tax). Others have called for a two or three-tiered flat tax. Neither proposal is considered "radical" today, though the current income tax/IRS system is so entrenched as to make it difficult (but well worth the effort) to remove it via the constitutionally-mandated two-thirds vote in Congress and approval by three-fourths of the states.

Nonetheless, we should have a serious conversation about it, as Governor Perry advocates. The Lone Star State chief executive argues convincingly that the income tax is a "great milestone on the road to serfdom." Indeed, it is. 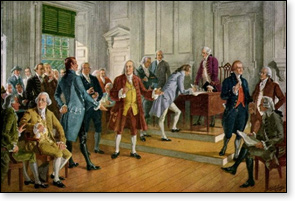 Repeal the 17th Amendment, as well

If Governor Perry had his way, the U.S. would return to the Founding Fathers' original intent that granted state legislatures the responsibility of selecting their states' U.S. Senators.

He is right, and we have made the same argument in this space. The Senate (of staggered six-year terms) was meant to be the "saucer" that acts as a cooling off counter-weight to the sometimes hasty action by the (universally two-year termed) House of Representatives.

The state legislatures — whose total focus is state issues — should select their states' U.S. Senators. That would make each senator more sensitive to the intricacies of home state concerns.

Governor Perry says the 17th Amendment resulted from a "mistaken" populist rage of the so-called "Progressive era" of 100 years ago.

This column agrees with that, but we would add that a concurrent change should reduce the population size of each House district, thus enlarging that body and making the "people's lawmakers" closer and more directly accountable to the preferences of their constituents.

It is not at all "radical" to advocate the idea that government should not spend more money than it takes in each year. There can surely be exceptions (narrowly defined) for emergencies. The current membership of the House is on board for this.

Marriage between a man and woman

Governor Perry would constitutionally ban same-sex marriage nationwide. So would we.

Admittedly, this raises questions with candidate Perry's belief in the importance of the 10th Amendment that "The powers not delegated to the United States by the Constitution, nor prohibited by it to the states, are reserved to the states respectively or to the people."

Speaking in Colorado a few days before he announced his candidacy, Perry said, "New York six weeks ago passed a statute that said marriage can be between two people of the same sex. And you know what? That's New York, and that's their business, and that's fine with me. That is their call. If you believe in the 10th Amendment, stay out of their business."

Since then, he's signed a pledge supporting a federal marriage amendment — saying that's always been his position.

Obviously, the problem with leaving the issue to the states is the potential for chaos as "married" same-sex couples in our transient society move from same-sex marriage states to states that prohibit it.

The radical arm of the "gay lobby" hopes to engender precisely that kind of confusion, waiting for America to throw up its arms and negate the anti-gay marriage views of a majority of the states. An amendment would have to be crafted in such a way as to make clear that the very impracticality of leaving the issue to the states makes the inviolability of marriage between a man and a woman a federal concern, and thus beyond the purview of the Tenth Amendment.

Any two consenting adults are generally free to do whatever they please behind closed doors. It's none of my business and I don't want to know about it. But endowing same-sex unions with the imprimatur of "marriage" is a stretch that negates laws in many states and trashes centuries of the human race's understanding of the very meaning of marriage.

Governor Perry would amend the Constitution to outlaw abortion nationwide.

Here, we applaud the governor's intent — but question its doability. A better way, at least initially, would be to amend the Constitution so as to return the abortion issue back to the states (and then address a national policy).

This is an entirely different circumstance than that of same-sex marriage. The 50 states can enact their own abortion laws without creating a bogged down legal mess. Even returning this prerogative to the states will be a huge — but worthy — undertaking. Making it a uniform national law could come later, if and when enough states can join a national consensus on the issue.

One Perry solution to the frequently very tone-deaf arrogance of the U.S. Supreme Court would be to allow Congress to override Supreme Court decisions by a two-thirds vote.

The Texan believes — as alleged in one of his book's chapters — that "Nine Unelected Judges Tell Us How to Live." True, but there is a reason why the Founding Fathers reposed so much independence in the judiciary, although Perry is correct in charging that such independence has been badly abused through what amounts to a judicial oligarchy. Is there a better way to deal with it? We think so. And we'll get to that in connection with the next — and related — amendment the governor would like to affix to the Constitution.

End lifetime appointments to the courts

"We should take steps to restrict the unlimited power of the courts to rule us with no accountability," says America's longest-serving governor.

Yes, we should. The would-be president from Texas says we could do this by imposing term limits on judges or "have judges roll off every two years based on seniority." No more "judge for life." 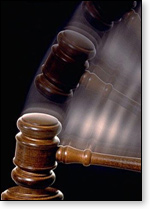 But would limited terms reduce judicial arrogance? Likely not. A judge so disposed might be even more reckless with the Constitution given that he has only so many years to turn our founding document on its head anyway.

A better idea to deal with judicial tyranny — better than term limits or a congressional override of court decisions — would be to lower the bar for impeachment.

The Constitution says federal judges serve for life as long as they observe "Good Behavior." That can mean anything or nothing. Why not replace that vague catch-all with specifics mandating some "club in the closet" enforcement of the requirement that judges remain faithful to what our Constitution and our laws actually say, rather than what a judge thinks they should say.

It is way beyond high time that Congress — duly elected — be much more jealous in protecting its lawful authority, and more active in monitoring court decisions in observance of the lawful and constitutional limits on the judicial branch. If a judge fails that standard, let us make it more likely that he can be ousted.

Suppose there were a permanent subcommittee of the Judiciary Committee in the House (which has no role in confirming judges, but does have the power to start impeachment and send them to the Senate for trial). This would at the very least raise the public profile of debates as to whether reckless judges deserve to lose their jobs.

And look. I'm not so naïve as to think this idea is not totally bereft of its own problems. But there must be some way of holding judges accountable short of major crimes such as murder or bribery. For those who have a better idea, please come forward.

Some have questioned other things that Governor Perry has said. Pundits believe he will be dogged by his book — written long before he decided to run for President. While we don't necessarily agree on everything, he and this column are basically on the same page. Meanwhile, there is plenty of time to see how the debates and primary campaigns shake out.