Wes Vernon
The candidates and debates: a candid review

September 22, 2011
As this is written, we're looking forward to the next Republican debate. It's early in the election cycle, but not too early to be thinking about which candidate is 1 — right on the issues, and 2 — electable.

The current administration leaves so much to be desired that it is only a slight exaggeration to say the day after Obama's inauguration would not have been "too early" to be thinking about a possible challenger.

Herewith some thoughts as of this point: 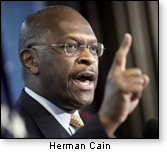 Herman Cain: A good man and a smart business executive. His "9-9-9" plan, as he describes it, has some merit: 9% corporate tax, 9% personal income flat tax, 9% sales tax.

His economists have figured out that 9-9-9 would free up investment cash so businesses can afford to hire again without fear the tax man will lower the boom; lift the crushing burden on the taxpayer in a fair and equitable manner; and pay down the deficit/debt.

What is most to like about the Cain plan is that in a spirit of fairness, it gives all taxpayers a "piece of the action" — i.e., everyone pays something, and it would eliminate some of the most destructive taxes on the books — the death tax and the capital gains tax.

The haters (class hatred peddlers, that is) will find an excuse to raise that 9%. Again, we would never hear the end of the "top 1 percent." And the sales tax might be a hard sell.

Still, the Cain outline deserves a serious focused national conversation. But if he is to reach the top tier of contenders, his poll numbers are going to have to move. Not enough people know much about him. 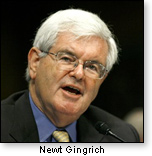 Newt Gingrich: Here is a brilliant tactician who would make an excellent CEO, including as President of the United States.

He did accomplish a lot as Speaker of the House. He and his leadership colleagues got President Clinton to agree on capital gains taxes and key components of welfare reform — albeit that Clinton was allowed to get in front of the parade in time to salvage his re-election chances

Among the strikes against Speaker Gingrich are his sometimes futile quests for an elusive bipartisanship from Democrats who do not — and never will — reciprocate. Example: He did a commercial on "climate change" (i.e., the hoax of "global warming") with Nancy Pelosi, and has similarly "reached out" to Hillary Clinton without any "reach out" on her part on any conservative issues.

Newt is a great idea man, but he is sometimes politically undisciplined, as when he called the Paul Ryan Debt reduction plan "right-wing social engineering."

Even forgetting some chapters in Gingrich's personal life, it's hard to put someone on the ticket if you never know when thinking out loud will occupy the campaign with "damage control."

His unquestionable ability to lead is offset by his lack of political discipline.

Jon Huntsman: The then-governor of Utah shocked the political world when he agreed to resign his statehouse post early in its second term so as to become President Obama's ambassador to China.

At the time, it was widely speculated the move on the president's part was aimed at eliminating Huntsman as a strong candidate against him in 2012. Did it work? Well, yes and no. He is running anyway, but failing so far to gain much traction in the GOP race.

This despite the fact that Mr. Huntsman does have a credible economic plan — credible enough to attract praise from the gung-ho Tea Party and the lions of free enterprise at the Wall Street Journal. In a nutshell, the Huntsman proposal would recalibrate the tax brackets at 8%, 14%, and 23% — and pay for this in a "revenue-neutral" manner by closing cost-inefficient loopholes.

On paper, that would appear to make Governor Huntsman a serious candidate for the Republicans, even though there are some Utahns who will claim that the longer Huntsman was in the governor's chair, the harder it became for him to find a tax he didn't like.

His downside includes support for the "climate change" hoax, combined with ridicule for those who disagree. His debate performance on that subject has shown him bereft of key facts on the issue.

And then we must ask how seriously the electorate will take a candidate with a paper trail that includes telling President Obama that he was "a remarkable leader" and that "It's been a great honor getting to know you."

Imagine that quote being dredged up by a media interviewer while the candidate faces a grinning Obama in a debate. That — plus Huntsman's reiteration of how he's a centrist. He may think of himself that way, but its squeaking chalk on the blackboard to a base that has had its fill of the Doles and the McCains who have led the party to the political depths of mush-filled ruins.

Michele Bachmann: "She's such an embarrassment to us," complained a native Minnesotan in a conversation with me. 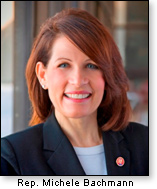 Given that the person doing the talking has a record of Democrat Party activity in Minnesota, I can understand, but not sympathize. If my team had its hand in the cookie jar and someone exposed the skullduggery, I could see that as an "embarrassment."

In her nearly five years in the House, Congresswoman Bachmann has, for example (there are many more):

1 — Exposed the criminal doings of the ACORN thugs engaged in the effort to steal elections for Democrats.

2 — Introduced the Light Bulb Freedom of Choice Act. (Good for her. Some of us would tell the feds — Hey, you want me to switch from Thomas Edison's incandescent light bulb to the fluorescent bulb which you assure me is sooo superior? Fine. Put it on the market. This is America! So sell me on it. Convince me. But don't try to shove it down my throat by government diktat. Otherwise I'm hoarding enough incandescent bulbs to last me a lifetime. Go pound sand.

3 — Has made distinctions between foreign involvements that can be justified in our interests and those that fall into the Wilsonian war habit nonsense of "Make the world safe for democracy." Bachmann correctly spoke out against our involvement in Libya, and showed some skepticism of the "Arab Spring" and the Islamist mischief therein.

Conservapedia reports, "A search for [Bachmann] on Google turns up five positive sites for every 100 nasty liberal smear sites."

Now, a possible hindrance to Bachmann's candidacy: After emerging victorious in the Iowa a straw poll, her ratings took a nosedive as soon as Governor Rick Perry — ignoring Iowa — entered the scene and instantly took the lead in the polls. (We'll analyze his run later.)

Now, there is word the Bachmann campaign is having money problems. That circumstance — if it persists — attracts the sharks.

The congresswoman meets one of our standards for the ideal candidate — right on the issues. But to be perceived as electable — the second standard — her numbers will have to rise. Otherwise the campaign money dries up. Certainly, the corrupt media won't help her.

Ron Paul: The problem with this candidate is that while he too is impervious (emphatically so) to the Wilsonian siren song of perpetual war for perpetual peace, he steps over the line into pacificism — though the Texas congressman would probably deny that. We still do have security threats, and it is necessary that we have the wisdom to distinguish reckless withdrawal from the world on the one hand, and the equally reckless war habit on the other.

Congressman Paul (75) says he will not seek re-election to his House seat, regardless of what happens to his presidential bid. That is too bad.

He won't get the presidential nomination. But we still need him in Congress for two reasons: 1 — to apply his weight in one foreign policy direction when we veer too far to the other extreme, and 2 — to continue his fight to rein in the Federal Reserve Board. One need not agree with his proposal to abolish the Fed outright to see the value in Ron Paul's whistle-blowing on FRB policies that make us vulnerable in a world where powerful enemies around the world hope to bring us down through economic disaster.

Next — Perry vs. Romney: A "two-man race" (or not so fast)? Also: Whither Palin and Christie?