Wes Vernon
Finding the right House candidate: one who stands out (Utah's opportunity)

April 16, 2012
In a crowded field, it takes extraordinary perception (to say nothing of time) to choose the right candidate for public office. No such difficulty exists in the Utah's Second Congressional District. 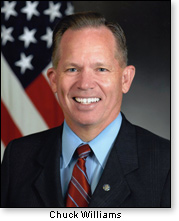 The crowded field is there. But the best qualified candidate hands-down is John C. "Chuck" Williams, former Assistant Deputy Under Secretary of Defense for Installations.

Support for his candidacy has an element of immediacy to it. As this column explained (see "Utah: the establishment strikes back," 1/16/12), the nominating system in Utah requires pivotal balloting at the state party convention before the top two vote-getters later face off in the primary. The Utah Republican Convention will be held this coming Saturday, April 21. Eleven candidates are in the running in the Second Congressional District.

The delegates to that convention have been picked by over 2000 neighborhood GOP meetings that were held a few weeks ago. The candidates are now focused on winning delegate support for the Saturday assemblage. Williams has an excellent chance of becoming one of the two primary candidates, perhaps even garnering the 60% convention vote that would automatically make him the party's nominee without going through the primary.

Just for starters, he is the only one of 11 candidates in that race who has had real combat experience. He flew 150 combat missions in Vietnam and received the Distinguished Flying Cross. Other ventures in honorable service to his country, and which entrusted him with heavy responsibilities, included high positions in administration cabinets and two presidential appointments.

He has a background in Utah and elsewhere with law enforcement, and with presidential inaugural and transition teams. (Chuck was a key operative in an early campaign of Rep. Darrell Issa [R-Calif.], now Chairman of the House committee investigating multiple scandals in the Obama administration.

Williams knows and understands Utah and the nation for which he put his life on the line. His worldview is well-reflected in a common sense, solution-based approach to the issues in all three major legs of conservatism — social, economic, and national security.

This contender for Utah Congressman is a Reagan Republican, literally and philosophically. The 20th century's greatest president appointed him to the Commission on the Bicentennial of the Constitution.

— The candidate believes that any "separation of church and state" must be understood by the actual words of our founding documents. The Constitution forbids the creation of a government-sponsored religion, but does not (as often misinterpreted) ban religion from the public square. Further, the rights of Americans are endowed by their Creator, as spelled out in the Declaration of Independence.

— Abortion is murder, plain and simple, according to the family man with four young children. That should give you a clue as to his view of defunding Planned Parenthood.

— A Congressman Chuck Williams would vote "aye" on a Constitutional Amendment defining marriage as between a man and a woman.

— He would fight any attempt to deny law-abiding Americans their God-given Second Amendment right to keep and bear arms for self-defense purposes.

— Children should be allowed to attend schools of their parents' choice (including home schools). No longer should they be required to attend poorly-run schools that exist more to protect mediocre employees or administrators than to advance kids' education. That sums up Williams' outlook as to those into whose hands we should entrust the teaching of our next generations. 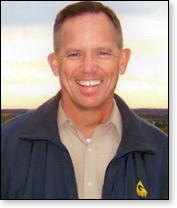 — Illegal immigration: "Illegal is illegal." Those are the candidate's words. My comment: Does anyone have any questions about the meaning of either of the two words in the three components of that linguistic unit?

— Our Constitution has a Tenth Amendment for a reason: to protect the states from heavy-handed federal intrusion. Expect Chuck Williams to introduce legislation to revoke all unconstitutional federal mandates.

— Mr. Williams would like to return all of the federal lands in the Beehive state to state control other than those areas utilized for military installations. One of the most egregious federal offenses against all 11 western states, not just Utah, is that the feds, from their concrete canyons east of the Mississippi, have locked up huge percentages of the land on the other side of that waterway, and thus denied Western states citizens the economic opportunities enjoyed by other regions. As a congressman, he would confront that unfairness.

— First and foremost, the Williams agenda in the 113th Congress would be to repeal the 2700-hundred page $2.4 trillion Obamacare. He would replace it with free market plans such as Medical Savings Accounts that would give consumers greater freedom and control of their healthcare choices.

— He would back a Constitutional Amendment requiring a balanced budget.

— The would-be lawmaker vows to support efforts to repeal the 16th (income tax) Amendment, which he defines as a failed 20th century "socialist experiment," as opposed to the consumption tax envisioned by our Founders (Federalist Papers #21). Among the potential Williams replacements would be the dual-tiered "Fair Tax." The IRS would be eliminated.

(No additional tax would be added onto the taxpayer's back. Any replacement would become effective only upon full repeal of the 16th Amendment, which would turn out the lights and shut the doors at the IRS.) 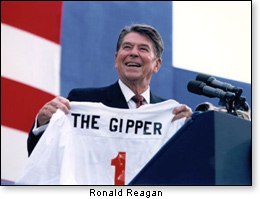 He would restore the Gipper's doctrine which included defense of close allies where America's best interests are at stake. Swift victory, then bring the troops home: That worked out in the Reagan years. Chuck Williams supports the same formula.

Having experienced combat, he appreciates the delicate task of avoiding the perception of weakness which only encourages the enemy to attack. For that, among other reasons, the candidate eschews "unilateral disarmament," which history has shown to be a delusion and a surefire recipe for disaster.

— Unlike all too many candidates for public office (including some incumbents), Chuck Williams believes it is long past time that we take substantive action about the threat of an EMP attack. (This column has sounded that same alarm in several past installments, most recently, see "American civilization wiped off the face of the earth?" — 9/8/11.) He would support the recommendations of the Commission to Assess the Threat to the United States from an Electronic Magnetic Pulse Attack. As we have noted, it's not a case of if but when an enemy will strike the nation, leading to mass starvation and death.

— Williams believes we "can and must do better to take care of [our veterans] who have sacrificed to serve their country in uniform."

The Democrat currently representing Utah's Second is six-term Jim Matheson, who this year has chosen to run in another district in the Beehive State's redrawn map. A major reason for his switch is that the new Second is now more Republican, a politically dangerous situation for the one and only Democrat in the Congressional delegation of this overwhelmingly conservative state. That, of course, makes it more likely that the victor on the Republican side of the contest in the Second District will be elected in November.

None of the opponents at this Saturday's GOP convention in Salt Lake County has the hands-on experience that Chuck has. His boosters believe "he has actually done it, while others only talk about doing it."

Among the two or three main challengers to Chuck's bid for the nomination is author Christopher Stewart, who has been accused of embellishing his military career. (Uh-Oh! That should send up a red flag for anyone familiar with Utah's political history. Years ago, Utah elected Douglas Stringfellow to Congress. His self-promoted image as a "war hero" was deflated after it was revealed that he had turned an injury from a routine military expedition into something more heroic than it was.

Chuck Williams is easily qualified — experience-wise, temperamentally, values-wise, and philosophically to represent Utahns in the Halls of Congress. He and his wife Stefani want to ensure their four young children, and all Americans, are entitled to "the blessings of liberty."

But he needs help. You can assist by going to chuckwilliamsforcongress.com and click on DONATE.

It is well to remember a (good or bad) president can't do much without the acquiescence of Congress. When a president is prone to ignore such constitutional constraints, we surely need patriots such as Chuck Williams to hold him accountable.