June 11, 2012
Readers were warned at the outset of our our summation of pre-Cold War events that it would require an entire book — rather than a mere column — to do full justice to so huge a swath of history. We still are not writing a book, but for those genuinely in search of further (albeit encapsulated) explanations, here goes. 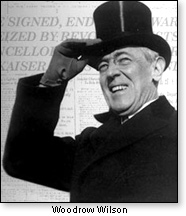 The Versailles Treaty did go further than Woodrow Wilson initially desired. Nevertheless, after Italy and Japan dropped out of the Post World War I negotiations, the "Big Three" (Britain, France, and the United States) were left to put it all together in what turned out to be a series of contentious meetings. But Wilson did in the end sign on to what was described as an "unhappy compromise."

Does the one-third input by Mr. Wilson constitute a "largely engineered" segment of participation in that final post-war product? I believe so, and therefore stand behind that description of the extent of his involvement in crafting the document.

Note too that when he maneuvered us into the war, President Wilson said our goal was "to make the world safe for democracy." He did not add "if only we agree to surrender our sovereignty to a world body [i.e., the League of Nations] after the war is over."

That sincere conviction did not make Taft or the majority of Americans "pro-Nazi." There were horror stories of Nazis' capacity for the extremely hard edge (even before the atrocities of the Holocaust), but those with long memories recalled stories of World War I German atrocities that, upon investigation, turned out to be false. Thus, the new stories were perceived by many as "a boy who cried wolf" moment.

To be sure, there were pro-Nazi groups (such as the Silver Shirts, etc.), but most Americans were simply "isolationist." One may think — with the benefit of hindsight — that they were wrong-headed. But they were honorable, patriotic citizens who were just as entitled to their opinions as those who thought otherwise. 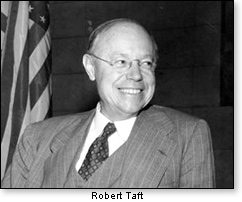 What did Taft mean when, at the outset of the Cold War, he became alarmed at the prospect that yet another war (as described in Winston Churchill's "Iron curtain" speech) would strengthen the Welfare State?

A major war causes much displacement. Citizens' lives are disrupted in many ways, of which military conscription is but one example.

There was a concern at the end of World War II that the decline of a revved up wartime economy would leave millions searching for employment and that "we don't want our boys on street corners selling apples." That led to legislation such as "the GI Bill" and veterans' benefits. This is not to say those benefits were undeserved, but they constitute a thrust toward an expansion of government in other spheres as well.

That juncture in the road can encourage a sense of entitlement promoted by politicians trolling for votes, offering the general (non-military) populace "free stuff" in return for more power in their elective hands. It is rare that one problem can be easily solved without creating another.

Again, a discussion of World War II leads to those who define Nazism as "right-wing." First and foremost, it is appropriate to bear in mind that the official name of the Nazi Party was the National Socialist German Workers Party. By contrast, right-wing, as applied to late 20th/early 21st century America, denotes those Americans whose fundamental beliefs are in limited government. Anyone suggesting Nazism was a philosophy of "limited government" risks being laughed off the stage.

On the other hand, in another segment of our discussion, the anti-anti-communists — whatever their motivations — ran interference for the Communists in post-war America: 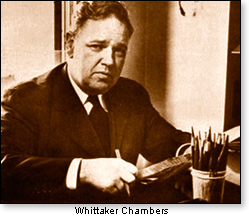 It is reasonable to ask why post-war liberals were so hell-bent on defending Alger Hiss, the convicted spy. Whittaker Chambers, who exposed Hiss, writes in Witness, that the New Deal was "a coalition of divergent interests [including, but not exclusively, outright communists]" concealing a "drift that was prevailingly toward socialism."

"Any charge of Communism" Chambers added, "enrages them precisely because they could not grasp the differences between themselves and those against whom it was made."

Those who argue that, in retrospect, a better case was made historically against U.S. involvement in World War I than against entering World War II miss the point: World War II would not have happened had it not been for the disastrous previous "Great War."

Further, had it not been for the Hitler-Stalin pact that launched World War II, Stalin would not have emerged with a strengthened hand in world affairs that launched the Cold War. 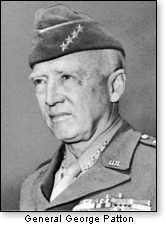 General George Patton tried in vain to warn his superiors that Stalinist Russia would wreak havoc in the post-war period.

Make what you will of the author's belief that General Patton's fatal "accident" amidst the ruins of the German occupation has all the appearance of an assassination. But not before you read the powerful circumstantial evidence he presents.

All of these wrong turns led to the decades of foreign policy disasters that confronted President Reagan when he entered the White House in 1981 determined to bring down that same Soviet Empire.