In diplomatic quarters worldwide, Barack Obama is perceived as either so weak, or ineffectual, or indifferent to America's interests, or all of the above, that our enemies have concluded they can walk all over "the world's last super-power" and get away with it. 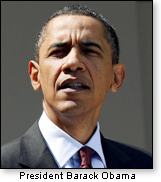 Another four years of this and one can only hope that nightmares about being surrounded by the world's primary America-haters are confined to restless nights separated from reality.

In our own backyard, Venezuela's dictator Hugo Chavez is providing a safe haven for terrorists, is an active supporter of Hamas and Hezbollah, has firmly allied himself with Iran's burgeoning nuclear power, refers to that nation's viscerally anti-American leader Mahmoud Ahmadinejad as his brother, and added he would consider a U.S. attack on Iran an attack on Venezuela.

Indeed, the situation has alarmed Diego Arria, a former Venezuelan UN ambassador, to the point that he has sounded the alarm in the pages of the New York Daily News that the quickest route to such Iranian retaliation "would be through Venezuela as it's close enough to the U.S." that Iran would not require intercontinental missiles to fire back at our cities. Shorter-range missiles would be adequate for that purpose.

The threat manifests itself well within America's borders. Arria says Chavez for years "has been financing Bolivian Circles in American cities [and that] the groups further socialist principles while building support for the Venezuelan revolution, as well as opposition to the U.S." Who knows what toxic mischief is planned or to what extent the ACLU runs interference for those groups preparing for the day when the signal is given to kill Americans on our city streets?

President Obama is satisfied to let the oil flow from Venezuela — hopefully to keep gas prices in the U.S. in check through the November election. Moreover, that photo of the then-new occupant of the White House with his arm around Chavez early-on in the Obama presidency does nothing to assuage concerns about where our president's sympathies lie. After all, as former Ambassador Arria observes, "Chavez's hatred for the U.S. runs deep." 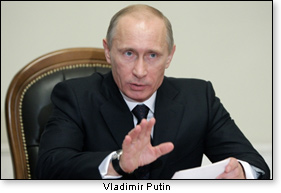 President Obama has put great emphasis on his desire for a "re-set" in relations with Vladimir Putin's Russia. The "re-set," however, has been a one-way street. Putin ignores the U.S. peace overtures by assisting Iran in its nuclear ambitions.

In fact, just this past week, Russia sharply criticized recent U.S. sanctions against Iran, warning America against punishing Iranian banks, insurance companies, and shippers that help Iran sell its oil. If those sanctions in any way negatively affect Russian companies, Putin said, Russia's relations with the U.S. would be damaged. He characterized the U.S. sanctions as "overt blackmail."

This is not new, really. Since the Obama administration stabbed our allies in Poland and the Czech Republic in the back by canceling a missile defense treaty to which Russia objected, the Russian government immediately saw it as a sign of weakness. Putin continues to protect Iran's back at every turn in its drive to build a nuclear capability that threatens death and destruction in the Middle East and elsewhere, including U.S. interests.

Obama gave a whispered hint of what was in store for his second term when he promised the Russians (when he didn't think the microphones were picking it up) that after he's re-elected, there would be serious talk about U.S. missile defense to which Russia for years has vehemently objected. Recall the 1986 breakup of a U.S.-Soviet summit in Iceland when President Reagan rejected Gorbachev's demand that America give up the Strategic Defense Initiative (SDI).

Just wait until I'm re-elected, Obama assures the Russians. That same message should not be lost on the American electorate: Just wait!

Now comes news that very recently a Russian nuclear-powered attack submarine carrying cruise missiles visited the Gulf of Mexico close to our shores for several weeks in June and July, and went undetected until after it had departed. That constitutes a none-too-subtle threat. Obviously the Russians have no fear either of the Obama administration's preparedness (such as it is) or its "security" procedures.

Nor was it necessarily coincidental that the incursion of the attack sub occurred at approximately the same time that Russian bombers violated U.S. airspace near California and Alaska. 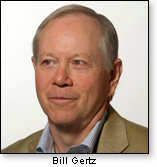 As Washington security reporter Bill Gertz has pointed out, such exercises require a 14-day notice. No such notice was given, despite the explicit provisions of the 2010 START treaty. Many voices, including that of this column, were raised during the debate on that agreement as to whether the U.S. was again entering into a dangerous pact with an untrustworthy Russian regime.

The treaty, not incidentally, was rammed through during a lame duck session of the Senate. We have called for an end to lame duck congressional sessions. They are held for the express purpose of doing an end-run around the voters on projects "too controversial" for public debate in the open before the voters can pass judgment on them at the polls.

The leaking of classified information is so rampant that an alarmed group of intelligence officers has gone public with its outrage. These are no armchair "experts." They are the Special Forces agents who know what it is like to look danger squarely in the face and end up in one piece.

The group Special Operations OPSEC Fund, Inc. (short for "Operational Security") has produced a 22-minute film which Reuters had an opportunity to view.

OPSEC operatives say their organization includes people of different political persuasions who agree that releasing the film during an election campaign is the only way to get the attention of the political class. The issue, they emphasize, is the lives of intelligence agents, not what happens or does not happen in a presidential race.

Several lawmakers on Capitol Hill — from both parties — have expressed alarm over the leaks they believe are coming from the White House. Here again, we have an example of a cavalier administration attitude toward security protections for the American people. 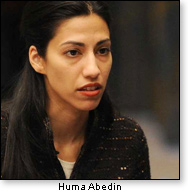 Speaking of security, issues of the Muslim Brotherhood's infiltration of government agencies have emerged. In our last column, we focused on the concerns of several veteran high-ranking intelligence officials who called Speaker John Boehner's attention to affiliations, associations, and activities of Huma Abedin, a top aide to Secretary of State Hillary Clinton.

She and some of her closest family members have been tied to Middle East organizations affiliated with the Muslim Brotherhood, which — as we have noted many times in this space — favors a worldwide subjugation to the rule of Islam. Islamist supremacists need not be confused with every rank and file Muslim. What we are citing here is a threatening political ideology. As activist Pamela Geller has said, we don't give a fig what they worship.

Others whose security clearances have become an issue because of their Brotherhood ties include:

— Rachel Hussain, Special Envoy to the Organization of Islamic Cooperation;

— Mohamed Elbiary, member of the advisory council to the Department of Homeland Security (DHS);

— Mohamed Magid, a member of the DHS Counter-Extremism Group;

— Kifah Mustapha, a fundraiser for the terrorist Hamas and graduate of the FBI Citizens Academy. 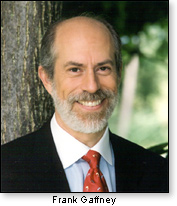 As CSP President Frank Gaffney has noted: "The American people are entitled to know who is shaping policies that are increasingly empowering, enriching and emboldening the Muslim Brotherhood, an organization sworn to our destruction."

Again, let it be said: No one has accused any of the above individuals of a crime. All that is mentioned is that they have affiliations in their backgrounds that should have triggered a serious vetting before they assumed responsible government positions. Where are their security clearances — if indeed such required clearances exist?

No doubt, a completely filled-out security clearance for Abedin would have addressed the allegation — raised in a column by Joseph Farah — that a publication for which she was assistant editor for a dozen years advocated Muslim rule in America rather than assimilating Muslims into American society.

No charges of criminal activity have been alleged; rather some serious questions of obvious conflicts of interest concerning American security are the issue.

As former prosecutor Andrew McCarthy has noted, government service is a privilege, not a right. The standards for denying one a government job and the standards for sending someone to jail upon conviction of committing a crime are vastly different. Where are the security clearances?