May 9, 2013
OBAMACARE SURVIVAL GUIDE: THE AFFORDABLE CARE ACT AND WHAT IT MEANS FOR YOU AND YOUR HEALTHCARE
By Nick J. Tate
Humanix Books, $19.95, 229 pages 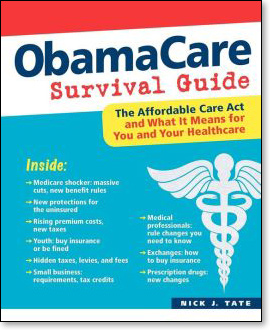 There are reasons why this is probably the most heavily promoted and advertised book in the television age, perhaps beyond that: Rare is the volume in recent times that deals so clearly with a subject – "Obamacare" – that will have such a profound effect on the lives of so many, prompted bitter debates from the halls of Congress to dinner tables across America, and yet about which there is still so much confusion. (Recent polling finds 42 percent of Americans are totally unaware of Obamacare. One awaits the rhetorical bombs destined to explode next year when this multifaceted Obamacare is fully implemented).

A notation before we continue here: The very term "Obamacare" is no pejorative; the president himself has embraced it.

"Obamacare Survivor Guide: The Affordable Care Act and What it Means for You and your Healthcare" lays it all out. Author Nick Tate (a journalist and intrepid fact-finder) has obviously studied all 2,700 pages of the confusing legislation, and delivers to America his analysis. He tries – oh, how he tries – to shine light on both the good and the bad, although facts get in the way of his effort at a strictly 50-50 report because a dispassionate analysis comes down on the side of the latter far outweighing the former.

The following, for better or worse, are some of the results the reader has in store: If you are on Medicare, your benefits will shrink, thanks to Obamacare spending cuts, thus discouraging some plans and providers from serving Medicare beneficiaries. If you're on Medicaid, new enrollees could overwhelm the program, eroding the care you have been receiving. On the other hand, if you are now uninsured, the Obamacare exchanges will probably offer better terms than those available to you on the private market.

Seniors will benefit from expanded coverage for certain preventive care services, though such advantages can be "small consolation" that "does little to offset the broader punishment" inflicted "on the Medicare program as a whole." Half of Obamacare's funding comes from new taxes and fees imposed on Americans – "more than $400 billion in the next decade." As for "working families," the new consumer protections and benefits in the law will help them, "but they come at a cost that insurers will pass on to ordinary Americans in the form of higher premiums."

If you're unemployed, and in the job hunt, you will likely have to deal with the reluctance of private employers to hire new workers because of mandates that a large number of companies will be required for the first time to provide health benefits or pay a penalty. If you're lucky enough to get a job, at least you may derive the benefits.

Come 2014, Obamacare says you, as an adult, cannot be denied insurance because of "pre-existing conditions" (which many interpret as the equivalent of taking out insurance on your home while the house is on fire.) Children already have that advantage now.

Illegal immigrants are considered officially "outside the system," although they are and will remain eligible for care in emergency rooms. Obamacare has increased funding for community health centers on which illegals already rely.

As the song says, "the beat [or in this case, the list] goes on." As it does, the author pinpoints a huge factor in Obamacare's success in making it through the legislative grinder on Capitol Hill three years ago: the lobbying clout of the large insurance and pharmaceutical companies. 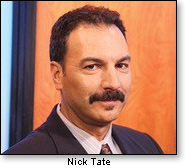 The law is structured in such a way as to supply insurers with about 30 million new customers, many of whom will have their insurance bills covered by the federal government. "In case you forgot, that's you and me," Mr. Tate reminds us. The insurance industry will also gain more paying customers and businesses.

"Big Pharma" benefits from "a massively expanded market for the drugs that companies manufacture." The pharmaceutical lobby was so ecstatic, "it even agreed to provide billions of dollars in subsidies to expand Medicare's prescription plan ."

Therein lies at least a partial explanation as to why the legislative battle over Obamacare in 2010 was minus the well-funded "Harry and Louise" TV commercials that we saw during the "Hillarycare" debate of 1994. Noting that failure (from their perspective), Mr. Obama's people won the support of these two industries through enticements ("carrots") and implied threats ("sticks").

In contrast to the good fortune of these industrial entities, Mr. Tate notes, smaller businesses will demote full-time employees to part-time status so as to avoid the law's 50-employee threshold for the mandated employer-provided health care coverage. The likely result? Less economic growth and more unemployment.

Questions remain, such as the cooperation (or lack thereof) of the anticipated state insurance "exchanges." Some states are pushing back. Obamacare "lives in a fluid state," Mr. Tate acknowledges. Future developments could bring changes. Nonetheless, the book is a good reference work despite those uncertainties.