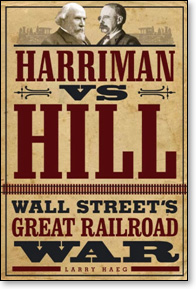 At last, someone has written one of the extremely rare well-balanced narratives about the history of America's railroads and the pioneer entrepreneurs who built them.

The "steel wheels on steel rails" did encounter a messy launch as they went transcontinental in the late 19th century. It did not follow that their creators deserved the "robber baron" designation.

In "Harriman vs. Hill," Larry Haeg lays it all out: James J. Hill, Edward H. Harriman, Jacob Schiff, J. Pierpont Morgan (the four principals in this real life drama) and others of their ilk had many of the shortcomings and attributes not unknown amongst the human race in an imperfect world. No, they did not shy from "making a killing" on the market for their investments. "Would you?" the author seems to ask.

"Class hatred" as some have labeled it, derived not so much from the fact that the railroad moguls had managed to accumulate wealth. Rather it was that some of them flaunted it, and that is what set off the muckrakers of more than 100 years ago (as for example, targeting J. Pierpont Morgan's multi-week trips to Europe on a "high end" shopping spree for rare works of art.)

Mr. Haeg finds fault with much of the legislation aimed at curbing excesses in the marketplace that had generated pushbacks in the early 20th century "progressive era."

Take for example, the landmark Sherman Anti-Trust Act, depicted in this book as lacking "clarity" – failing to distinguish between reasonable and unreasonable "restraint of trade."

A narrow division among the Supreme Court justices very early in the 20th century ultimately played a key role in determining how America's transportation system would emerge by the century's end.

That issue and ancillary concerns were at the center of lawsuit against the railroads by the T.R. "Teddy" Roosevelt administration. At the center of the litigation was Northern Securities, a "holding company" for Great Northern and Northern Pacific railroads.

"Harriman vs. Hill" portrays the government case as somewhat weak. The two railroads did, in fact, compete against each other, but only to a limited extent. Otherwise, their interests were in different spheres, far more often than not serving different communities. 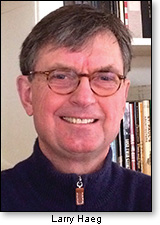 The outcome to the court case was 5-to-4 in favor of the government and against Northern Securities. Its twists and turns would have been familiar to 21st century students of the court.

The legendary jurist Oliver Wendell Holmes voted with the majority against Northern Securities, but only on what he saw as a thin but intractable technicality of law. His dissent reeked with strong criticism of the Roosevelt administration, while simultaneously upholding its bottom line position. Among other things, Justice Holmes suggested his majority colleagues on the court were partly influenced by their personal dislike of J.P. Morgan and James J. Hill (the latter was founder of Great Northern).

Some readers who venerate the memory of Teddy Roosevelt will be disappointed that Justice Holmes (who also occupies a favorable place in history) came to view the 26th president as a "pretty unscrupulous politician."

The major thrust of the author's presentation comes down to this: Here we had a circumstance where a growing new industry whose builders remade America into a prosperous economic giant, attracting millions of jobs and enriched the lives of many, and a result was a drumbeat of demonization of their private-sector leaders.

Attorney General Philander Knox tried to quell the witch hunt "but it was too late," says the author. The open season on transportation innovators was on. Editors, politicians and regulators piled on. The New York Times piled on: "Nothing but the contemptible hypocrisy and cowardice can now restrain the Administration from letting loose all the dogs of war upon the guilty restrainers of trade."

The government, or in Mr. Haeg's words "bureaucratic central planners and distorters in disguise," embarked on what turned out to be a half century stranglehold on the railroads, deeming them to be "federal instrumentalities."

To compound the offense, "they showered public subsidies of money on [highways, waterways and airlines] and deprived the railroads of their ability to decide how much money they could charge for their service."

As the Interstate Commerce Commission (ICC) and other federal bodies micromanaged or sought to micromanage the railroad industry, the newer competitors benefited.

Mr. Haeg sums it up: "Trucks became faster, bigger, more efficient, with pneumatic six-cylinder engines ... and semi-trailers loaded on flatbed railroad cars. Then came container shipping and the federal interstate highway system, and five-axle eighteen wheelers ... . The final indignity was that rack trucks, not railroads ended up hauling most of the new cars ... ."

Could the transportation mix have ended up much differently today with a more level official playing field in those early years? One can only speculate.