Wes Vernon
The war on terror: whose side are we on?

April 24, 2014
The Benghazi cover-up is opaque, convoluted, multifaceted, and rife with betrayal and heavy-handed efforts to shut people up. Even some of the most knowledgeable intelligence experts are running up against an iron-fisted wall of resistance from a leviathan government impervious to any and all efforts to penetrate its fortress-like web. 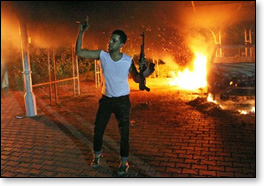 Whose side are we on?

Further, even our own government's commitment to the anti-terrorist cause launched after the original 9/11 is – to say the least – in doubt.

The Citizens Commission on Benghazi presented an interim report this week on its investigation into the Benghazi scandal and charged that under the Obama regime, the U.S. has changed sides in the War on Terror, and that the Muslim Brotherhood has doubled down on its decades-long campaign to infiltrate Western governments, even including some intelligence agencies.

The other side? How?

"Even more disturbingly," the commission (organized by Accuracy in Media) wrote in its report, "the U.S. was fully aware of and facilitating delivery of weapons to the Al-Qaeda-dominated rebel militias throughout the 2011 rebellion [in Libya]. The jihadist agenda...of the Libyan Islamic Fighting Group (LIFG) and other Islamic terror groups represented among the rebel forces were well-known to U.S. officials responsible for Libya policy. The rebels made no secret of their Al-Qaeda affiliation."

Continuing with the commission report:

"...And yet, the White House and Senior congressional members deliberately and knowingly pursued a policy that provided material support to terrorist organizations in order to topple a ruler who had been working with the West actively to suppress Al-Qaeda. The result in Libya and North Africa and beyond has been utter chaos, disruption of Libya's oil industry, the spread of dangerous weapons...and empowerment of organizations like Al-Qaeda and the Muslim Brotherhood."

(This column blew the whistle on the war on Libya at the time it was taking place [See The War Habit: What are we doing in Libya – August 15, 2011]. The commission's far more detailed investigation of betrayal not only verifies that column, but has added much more information of its own.) How is it that this stunning shift is so scandalously little known? For that, we turn to.......

Among the Intel experts on the commission is Clare Lopez, whose affiliations and roles have included (but are not limited to) the Center for Security Policy, the London Center for Policy research, Vice President of the Intelligence Summit, and a career operations Officer with the Central Intelligence Agency.

The lack of public concern regarding the turnabout in America's position on the War on Terror, Ms. Lopez writes, can be traced in part to the fact that "[t]he U.S. media were silent. The major print, broadcast, and internet outlets said not a word about this astonishing turnabout in American foreign policy."

"To this day," she adds, "they have not seemed to recognize that the pivot to support al-Qaeda took place. But it needs to be said: The American people deserve to understand that their most senior leaders, both elected and appointed, have violated their oaths to preserve, protect, and defend the Constitution of the United States against all enemies, foreign and domestic."

The Lopez report cites other laws that were broken in this sell-out (my word, not hers).

There is U.S. Code 2339A and 2339B specifically prohibiting any act of providing material support to "Terrorists or Designated Foreign Terrorist Organizations."

"Penalties for actually providing or attempting to provide material support to terrorism are even harsher," Lopez writes. "Imprisonment from 15 years, with a life sentence applicable if the death of any person results from such a crime. Aiding, abetting, counseling, or procuring in support of a violation of 2339-B is punishable by the same penalties as for the offense itself."

In other words, if U.S. laws were actually enforced – a strange concept for this administration – somebody somewhere at or close to the top – would be in danger of spending a long stretch in the slammer.

The Muslim Brotherhood has doubled down on its decades-long campaign of infiltration and/or influence in Western governments, even including some intelligence agencies. From its very beginning in 1928 following the fall of the Ottoman Empire in World War I, its literature has encouraged deceit and propaganda to the Western World and of course, demonizing (or worse) the so-called "infidels."

The Muslim Brotherhood's undercover operations (and those of other Islamist groups in the U.S.) were mentioned at the commission press briefing this week.

Admiral James Lyons, former Commander-in-Chief of the Pacific Fleet, spoke of an urgent matter that should have been acted upon, but wasn't, and then explained that Islamist influence has been exerted in intelligence agencies throughout the Western world. 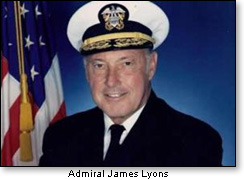 "You need to go back to the thirties, forties, and fifties," he declared, an obvious reference to the Communists who were infiltrating our government. That era is best explained in the late FBI Director J. Edgar Hoover's 1958 volume Masters of Deceit, and more recently in M. Stanton Evan's Stalin's Secret Agents published last year. The similarity in tactics of enemies then and enemies now is unsettling.

In fact, another separate monograph by Clare Lopez has much to say about the History of the Muslim Brotherhood Penetration of the U.S. government.

To make matters worse, House Speaker John Boehner refuses to create a select committee to give the probe the high profile momentum required to solve the case and bring the guilty to whatever justice fits the offense, including the cover-up itself.

At the briefing, I asked John Clarke, the AIM's FOIA attorney about what happens when and if the AIM panel goes to Congress or whatever relevant authority would apply, submit the damning evidence, and recommend "full accountability." He went through a legal explanation, but seemed to emphasize that public revulsion would be pivotal to bringing that process to a justifiable result. Of course, that public "revulsion" is not likely to happen unless the public is told what is going on.

Fellow Americans, we have our work cut out for us.