Wes Vernon
The Brexit vote and crocodile tears from Soros 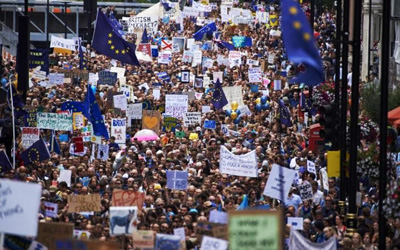 In the aftermath of Brexit, we're seeing – not a new method of "persuading" voters to go back to the polls again and again and repeatedly cast their ballots on the same issue until, weary of being herded back multiple times to the voting places, the public gives up and finally votes the "right" way. No, what we're seeing is old. Some insistent regimes of past centuries have been known to engage in that tactic.

Some of the "sore losers" in the 21st century are calling essentially for the same thing – either by voting again and again or being persuaded to "come around" to the more "enlightened" point of view.

Or taking to the streets?

From the streets of (not-always-so) merry old England, there was the spectacle this past weekend of thousands of protesters marching through Central London to protest the United Kingdom's vote (Brexit) last month to exit the European Union (EU).

What the protestors are demanding is that the British Parliament overrule the will of the British voters who (expressed 52%-48%) to pull the UK out of European Union (EU).

Strange, is it not, how some of these people (on both sides of the pond) are all for the democratic voice of "the common people" until that voice does not go their way.

In which case, voters are slammed as "racists," "homophobes," "bigots," or whatever. 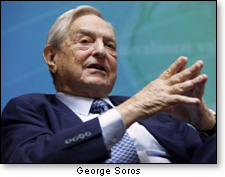 Billionaire socialist George Soros is now calling for a thorough reconstruction of the EU. Saddened though he says he is that the arrogant ways of the EU leaders have had to receive a comeuppance at the polls to get the message, the world's liberal moneybags says those impudent voters have dared to make the "disintegration of the EU practically irreversible."

It's hard to take Soros seriously after he manipulated the British markets several years ago, with the result that many folks of lesser means suffered thereby. They were – in a word – robbed.

Mr. Soros in 1992 made huge profits by betting against the British pound as it crashed below the preset level and had to be withdrawn from the European Exchange Rate Mechanism. Now, even though he admits the EU had broken down and ceased to satisfy its citizens' needs and aspirations," he wants it to be reconstructed, and blames the voters who stood up and said "No more" to living under a high percentage of their laws, regulations, and decisions by foreign regulators, foreign lawmakers, and foreign judges.

Worldwide cheers for the Brits

G. Edward Griffin, author of books and columns dealing with contemporary (and historical) issues, adds this word of encouragement to our British cousins:

"It is not that we have a stake in Britain's internal affairs, but because this issue has as much to do with global government as it does with national prosperity [yes, we're interested]. In other words, this is a setback for the BIG strategy to put elitist politicians and bankers into control of the entire world – and that affects us at the macro level."

Sir James Dyson, a respected investor, said Britain will gain more from leaving the EU than it will lose. He added, "When the Remain [in the EU] campaign tells us no-one will trade with us if we leave the EU, sorry, it's absolute cobblers. Our trade imbalance with Europe [is running high], and rising."

What would the Gipper think?

As a gentleman who understood the observed basic rules of good diplomacy, the late President Ronald Reagan would not presume to use his good offices to tell the British people how to vote.

However, thanks to Dan Henniger of The Wall Street Journal, we have come across a Reagan quote that may hint at where our 40th president's sympathies would lie:

"We have been tempted to believe that society has become too complex to be managed by self-rule; that government by an elite group is superior to government for, by, and of the people. But if no one among us is capable of governing himself, then who among us has the capacity to govern someone else?"