May 26, 2017
The mainstream media apparently have decided the bungling Democrat Party (and some scared rabbits in the GOP) are doing an inadequate job of getting President Trump booted from the White House. Therefore, they themselves (those same media types) want to be the de facto engine to bring forth the charges (i.e., new "facts") that will bring our 45th president to his supposedly deserved doom. Despite their night and day efforts, they have been frustrated at their inability to find a shred of evidence that Donald Trump became president by colluding with the Russians. Lack of evidence, however, does not stop the left masterminds from making the charge. 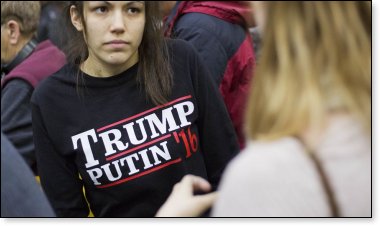 The underlying charge is that – four months into his presidency – President Trump has got to go. Proof? Simple. If you can't dazzle them with brilliance, baffle them with hogwash. And if you can't accomplish either goal, haul out some version of
it "must be" that the Donald is obviously "hiding something" – why, don't you
know – Hillary didn't lose the election. It was stolen by collaboration of (all together, now) "Donald Trump and the Russians."

If that doesn't make any sense, just keep repeating it. It doesn't matter if the public is confused enough or accusers are bold enough to keep the story running for days until some other Trump/Russian "fake news" report gets the people sufficiently twisted into a pretzel-like state of wonderment. Then make up something else, another Russian bogeyman.

Somewhere in the bowels of the Democrat Party's secret basement library, one can possibly imagine there's a playbook on Words Guaranteed to Scare Republicans: Bending the GOP Scared Rabbits to Democrats' Will.

The thrust of the lesson is that if the Republicans succeed in passing pro-American legislation anathema to Democrats, let them know the Dems will respond by shutting down the government and then will see to it that the Republicans get the blame, perhaps intended to stir unjustified fears among the people that they will be pushed over the cliff bereft of their benefit checks, all because heartless Republicans kept the checkwriters furloughed from government. That is the frequent Democrat line. Only a political party with total contempt for the public it pretends to serve would engage in drowning its own constituents under overpowering insults to their intelligence.

Oh! and don't forget this

A Special Prosecutor is arguably armed with powers that often can exceed that of every other government official. Plumbing the depths of a secret Democrat playbook would probably require a tolerance and experience with well-honed cynicism. Much of that can be publicly and deceptively smoothed over by the fact that former FBI director Robert Mueller III – the man chosen for the job of investigating of Donald and the Russians – is "well respected." Be it true that Mr. Mueller is well-liked, the personality of the appointee is less relevant than the process by which he assumes a new role that arguably could make him the most powerful official in government. 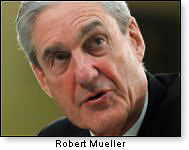 As the Wall Street Journal pointed out in a Thursday editorial, Mr. Mueller "will now have unlimited time and resources to investigate anything and anyone he wants."

That is an outrageously tempting opportunity to engage in an abuse of power. And specific "special prosecutors" have over the years succumbed to that bullying opportunity. In one such case, someone involved in the case gave a newspaper columnist the name of an "undercover" operative.

Investigating journalists have cited such past Special Prosecutor show-boaters as Patrick Fitzgerald, the Chicago attorney assigned to the Valerie Plame case in the nineties. Fitzgerald's job was to find out who told columnist Robert Novak of Ms. Plame's role at the CIA. "Special Prosecutor" Fitzgerald was unable to pin the charge on then Vice President Dick Cheney. Undaunted, the prosecutor seemed to be concerned with justifying his job. Whether that also included serving the cause of justice is not addressed here. He then turned to going after Cheney's right-hand man, Scooter Libby, on a lesser matter not fundamentally of utmost importance to the question at hand: i.e., who was the person who gave the name of Valerie Plame to Mr. Novak?

In the end, Libby's career was ruined. Fitzgerald of course, didn't seem to care. He got a scalp – not the relevant information supposedly sought by the investigation. Fitzgerald put himself in the embarrassing position of having to justify his existence by using a non-conclusive side issue to uncover an irrelevant "mystery" (dubbed by one commentator as "Yadda-yaddagate"). Fitzgerald failed to make his case, but he did get a scalp.

But it was even worse than that. Bob Novak said Fitzgerald, knowing the identity of the person who gave Plame's name to Novak, nonetheless in effect ordered Novak to continue to withhold the information, while in the meantime Fitzgerald was trying to build his phony (virtually different) case against Libby. Meanwhile, Novak had to keep his mouth shut (at Fitzgerald's request), while taking public abuse and false accusations against his journalistic integrity.

Actually, the person who tipped Novak was a State Department official named Richard Armitage, very close to Secretary of State Colin Powell. So it was Armitage who gave the name to inform Novak; Libby's involvement in the Valerie Plame case was very tangential in nature. Fitzgerald knew this. Why the prosecutor did not try to indict Armitage is left to the imagination. There were some who were so impolite as to point out that Mr. Armitage was a member in good standing of the "Washington establishment." 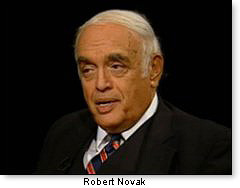 Judging by his actions, Fitzgerald's goal to nab someone – anyone – for anything took precedence. In the process, if that ended up destroying Libby professionally, well, that's too bad. Never mind that the questionable allegation of perjury against Libby was in no way pivotal to the underlying case. Tough. Those are the breaks.

As Novak said publicly, "Fitzgerald knew – independent of me – the identity of the sources." But insisting that the information be held for the benefit of the "special prosecutor" was another matter.

And who can forget Iran-Contra?

Lawrence Walsh was the special prosecutor in the politically manufactured "Iran-Contra" case. This issue swirled around political differences in Washington in a complicated maneuver involving aid to the Contra's anti-Communist movement in Nicaragua whose leaders wanted to rid themselves of the Communist Sandinista government in that beleaguered country. If ever there was a probe that earned the label "witch hunt," this was it.

Lots of political allegations, but major convictions ended in reversal. There were allegations that Mr. Walsh tended to use the special prosecutor's office to treat honest political differences as criminal offenses.

The ridiculous extremes the special counsel pursued even led him to toy with seeking to put President Ronald Reagan in prison. As soon as columnist William Rusher reported on that, some whispers around Washington suggested that perhaps Mr. Walsh had seen better days. In his own memoirs, Walsh admitted that he "knew" after talking with Mr. Reagan informally that the (by then) former president would not be going to jail. It wasn't long thereafter that outgoing President George H.W. Bush drew the curtains down on this shameful exercise in political exhibitionism, and put the principles in the case out of their collective misery. The person most responsible for bringing this fakery to light (years before "fake news" became a household term) was L. Gordon Crovitz, then an editorial writer. Crovitz was extremely skillful in exposing the foolishness of the Walsh team.

But that was in the nineties. Today, we have another Democrat-instigated witch hunt, thanks in part to a phony call for a Special Prosecutor, so "we can find out just what happened," with "no partisan slant" (uh-huh), between Trump and the Russians – and this time they have selected for the job a former FBI Director with an impeccable reputation. It seems, however, that the wild charge that the Trump campaign "colluded" with the Russians is so thin that many of the accusers – however slowly, so no one will notice the Democrats' embarrassment – are starting to walk back the allegation.

From outward appearances, former FBI Director Robert Mueller would be a dream candidate for the job of Special Prosecutor. He has a reputation as a super-stickler for facts and one whose "bias'' is non-existent. And background?

Except that questions about his character or reputation as "a good man" are not at issue. Rather, this goes back to the question of whether the "Special Prosecutor" system itself is inherently unworkable, operating as it does within a system so infused with Washington's "revolving door" politics. The Iran-Contra and Valerie Plame cases (cited above) are examples.

So what are we to do? Import somebody from Mars? Try such things as congressional investigating committees, grand juries, etc. Dozens of other bodies are set up to deal with lawbreaking, including outside activist groups that can petition their government, with attendant publicity, and attract the attention of hungry lawyers. Even a fair and judiciously careful Robert Mueller can't help it that he and James Comey worked together in the FBI and were social friends at that time. That should not be held against Mueller. And yet, you can truthfully say the "Special Prosecutor" system encourages such unfair speculation of "the appearance of a conflict of interest," as well as the reality of it.

Some people, fairly or not, had to scratch their heads in wonderment that Mueller became FBI director, in part because of the full-throated backing of then Senator Barbara Boxer, one of the roughly half dozen more extreme leftists in the Senate. A less politically-motivated man than Mueller could take that as a green light to seek as many innocent scalps as he can find.

Ditch the "Special Prosecutor" system. It is a flawed roadway to justice.