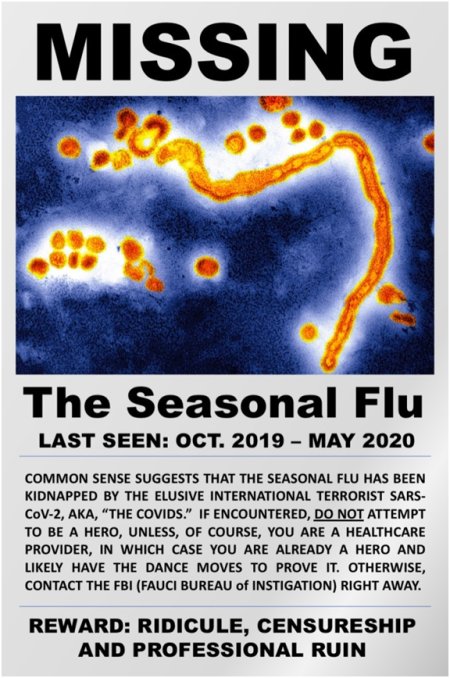 [This article was originally published at www.OperationUnmask.us]

Where did the seasonal flu go? According to the anti-science mavens of mandatory masking, the flu is being kept at bay thanks to social distancing and the widespread use of face coverings. At least, this is the answer that was recently given to me by my physician.

When I asked her why, if masking and distancing work so well, the COVIDS is still reportedly spreading like wild fire, she said it’s spreading because too many people aren’t following the guidelines.

When I asked the next obvious question – Why aren’t these people getting the flu? – she demurred, declaring, “Studies have shown that masking works!”

After making mention of the numerous Randomized Controlled Trials that indicate otherwise, some of which were cited by the CDC as recently as May, I decided that midway through my annual physical exam wasn’t exactly the right time to delve into the topic more deeply, so I let it go.

Even so, I had a strong suspicion that the “studies” to which my doctor referred were those ubiquitous apples-to-oranges exercises that are designed to reach a predetermined conclusion (masking works!), but just to be sure that some new breakthrough research hadn’t been done on the subject, I did a little research.

One of the more recent studies that I came upon was published by the Lancet just a few days ago, and it’s emblematic of precisely the sort of non-scientific exercise I had expected to find.

In it, so-called “researchers” surveyed nearly 400,000 people scattered across various U.S. states, whom they relied upon to self-report their mask usage and social distancing discipline. Using that data, they categorized communities according to the percentage of persons in them that say they consistently mask and distance. From there, they attempted to draw comparisons between them relative to the transmission of COVID-19.

The authors of the study readily admitted that, unlike Randomized Controlled Trials, their method of data collection cannot account for “measures of physical distancing, community demographics, and other potential sources of confounding” (one thinks of such variables as population density, weather conditions, occupational factors, etc.)

Their solution? The researchers employed what they dubbed “multivariate logistic regression models to estimate the association between mask-wearing and community transmission control.”

Bearing in mind the infamous “2-million-dead” models invoked by Fauci and Birx, et al., one cannot help but wonder what could possibly go wrong!

Even so, the researchers’ models led them to draw the following conclusion:

“We found that communities with high reported mask-wearing and physical distancing had the highest predicted probability of transmission control.”

So, there you have it. The Lancet, one of the world’s (previously) most highly regarded medical journals, has been reduced in this age of COVID-mania to publishing “predicted probability” studies based on honor-system reports and speculative models, as if they reveal anything more meaningful than the political bent of the authors.

One of the major funders of this middle school level term paper project was Google.org, the same techno-dictators who think nothing of censoring content from renowned virologists and immunologists who fail to adhere to the party line on the unprecedented danger that is the COVIDS.

So much for the scientific method.

Later, during the same visit with my doctor, she circled back into the examination room (after a google search, perhaps) with a better explanation as to why the flu has apparently gone missing.

“The reason flu numbers are so low,” she reported, “is because so many more people, fearful of COVID, are getting the flu vaccine this year.”

OK, I’ll have to look into that later, I thought.

Now, while I don’t have any data to back this up, I’m reasonably sure that a rather large number of those persons who have not gotten the flu vaccine are the very same renegades that are refusing to dutifully go along with the social distancing and masking program.

And yet, even they aren’t getting the flu? What’s up with that?

In any case, I did a little research into the flu vaccine, and guess what? The numbers being reported don’t even come close to supporting the narrative.

Surprised? Yeah, me neither.

According to the CDC:

“Coverage estimates from the two late December surveys indicated 53-54% of people had gotten flu vaccine. These estimates are higher than the previous season’s (2019-2020) coverage estimates for adults, which were 42% by the end of December 2019. Given potential limitations of these rapid surveys and underlying panels that might lead to over-estimation of vaccination coverage … confirmation with estimates from other surveys (to be available later) is needed.”

So, at most, roughly 11% more of the population has gotten the flu vaccine this year as compared to last year. OK, so one would reasonably expect to find a similar decrease in the incidence of flu, right?

As it is, the CDC also reports:

“A total of 129 laboratory-confirmed influenza-associated hospitalizations occurring between October 1, 2020, and January 9, 2021, were reported by FluSurv-NET sites.”

And how does that compare with this time last year? The CDC reports:

“A total of 8,633 laboratory-confirmed influenza-associated hospitalizations were reported by FluSurv-NET sites between October 1, 2019 and January 25, 2020.”

Get that? Serious cases of the flu have been all but eradicated entirely! And this, according to the narrative, is because the flu vaccine has been received by 11% more of the population? Really?

Even if one allows for some exponential decrease in the incidence of flu based on the uptick in vaccinations, the numbers simply do not add up.

How anyone with even a modicum of common sense can believe that the official narrative is true is beyond me. Among those who do are persons who, for whatever reason (and there are no good ones), genuinely want to believe it, in spite of what the data may suggest. For these people, nothing will ever convince them otherwise.

Others, presumably like my doctor, who otherwise takes great care of me and my family, are just too busy and too trusting of the political, medical and pharmaceutical establishment to look into the matter for themselves – a poor excuse, to be sure.

So, back to the question at hand: Where did the seasonal flu go?

The answer, one strongly suspects, is that it hasn’t gone anywhere. It’s here. It’s making people sick and it’s putting some of them in the hospital, just as it always has.

Those people may, or may not, be getting tested for the flu, but you can bet your latest stimulus check that every single one of them is being tested for the COVIDS, and given the well-documented, outrageously high, incidence of false positive PCR tests… You get the point.

Even in cases where a patient may test positive for both the flu and the COVIDS, guess which one is being reported as the cause for their hospitalization?

Before you answer, bear in mind that the $2 trillion CARES Act passed by Congress in March increases per-patient Medicaid reimbursements to hospitals by 20% for patients listed with a “principal or secondary diagnosis of COVID-19.”