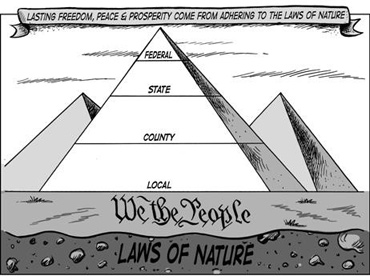 "[The Ninth Amendment] specifically roots the Constitution in a natural rights tradition that says we are born with more rights than any constitution could ever list or specify."

The enumeration in the Constitution, of certain rights, shall not be construed to deny or disparage others retained by the people. These are the 21 simple yet transcendent words of the Ninth Amendment. This country would not exist as we know it if the Bill of Rights and in particular the crucial Ninth and Tenth Amendments weren't also included to protect federalism – states' sovereign rights over federal socialist tyranny.

The Bill of Rights, or the first 10 amendments to the Constitution, was modeled after the Ten Commandments of the Bible and considered by the constitutional framers to be Natural Law – in other words unalienable, God-given, enumerated, natural rights given to all citizens by God and thus rights that could never be lawfully taken away by any tribunal or man's law.

In America's early history, there were constant arguments between the Federalists and Anti-Federalists regarding the need for a bill of rights. In Federalist No. 84, Alexander Hamilton argued that a bill of rights was redundant, because it was unnecessary to place limits on the power of government to do things it was not authorized by the Constitution to do. It would be impossible, Hamilton argued, to list all the rights "retained by the people." Protecting some rights but not others exemplified the Latin maxim expressio unius est exclusio alterius would suggest that Americans had surrendered certain rights to their government when, in Hamilton's view, the Constitution did nothing of the sort.

On the contrary, Anti-Federalists like James Madison and Thomas Jefferson embraced a much deeper belief in the need for a bill of rights and the Ninth Amendment, which was intended to vitiate the aforementioned Latin maxim. The enumeration of certain rights and liberties in the Constitution, according to the Anti-Federalists, should not be understood to deny others that exist as a condition of citizenship in a free society. Madison, the primary author of the Bill of Rights, insisted that the Ninth and Tenth Amendments be included in the original Bill of Rights to emphasize the framers' fundamental Natural Law ideals.

It is significant when discussing the history of the Bill of Rights to realize the Supreme Court held in Barron v. Baltimore (1833) that originally the Ninth Amendment was enforceable by the federal courts only against the federal government, and not against the states.

Because the Supreme Court has been cautious in giving such general language any substantive definition, it has never presented a clear and definitive interpretation of the Ninth Amendment. The amendment has been cited in such decisions as Griswold v. Connecticut (1965) (legalizing birth control for married couples) and Richmond Newspapers v. Virginia (1980) (court trial must be open to the public and press) together with other constitutional amendments to strengthen the case on behalf of an asserted constitutional right. The problems in constructing a specific meaning for the Ninth Amendment is demonstrative that both supporters and opponents of legal abortion have cited this amendment to defend the verity of their individual positions.

The Ninth Amendment simply restates the Natural Law idea that rights not specifically enumerated in the Bill of Rights exist and are retained by the people. It was added to ease the concerns of Anti-Federalists such as Madison and Jefferson, who feared that the enumeration of so many rights and liberties in the first eight amendments to the Constitution would result in the denial of rights that were not enumerated.

As mentioned, up until 1965 the Ninth Amendment was rarely mentioned by the Supreme Court. In that year, however, it was used for the first time by the Court as a positive affirmation of a particular liberty – marital privacy. Although privacy is not mentioned in the Constitution, it was, according to the Court, one of those fundamental freedoms the drafters of the Bill of Rights implied as retained.

Leftist jurists like Justice Arthur Goldberg (joined by Chief Justice Earl Warren and Justice William Brennan) have asserted that the Ninth Amendment is relevant to interpretation of the 14th Amendment as demonstrative in a concurring opinion in the case of Griswold v. Connecticut (1965). Here is an excerpt from that infamous opinion:


... [T]he Ninth Amendment, in indicating that not all such liberties are specifically mentioned in the first eight amendments, is surely relevant in showing the existence of other fundamental personal rights, now protected from state, as well as federal, infringement. In sum, the Ninth Amendment simply lends strong support to the view that the "liberty" protected by the Fifth and Fourteenth Amendments from infringement by the Federal Government or the States is not restricted to rights specifically mentioned in the first eight amendments. Cf. United Public Workers v. Mitchell, 330 U.S. 75, 94-95.


Since 1965, the Court has ruled in favor of a host of fundamental liberties guaranteed by the Ninth Amendment, often in combination with other specific guarantees including the right to have an abortion.

The title of my column has a double meaning – on the one hand, the Ninth Amendment was ignored by generations of leftist law scholars, progressive politicians and activist judges; on the other hand, those judges concocted out of who cloth and "found" a new right to privacy to legalize birth control in Griswold v. Connecticut and a hidden constitutional "right" in the "penumbras" and "shadows" that have for over 175 years eluded all of the constitutional framers, as well as subsequent constitutional scholars and legal experts, leading directly to legalization of abortion in Roe v. Wade (1973) just eight years later and in the legalization of homosexual sodomy in the Lawrence v. Texas (2005) case.

Tragically, on the 40th anniversary of Roe v. Wade, America's collective, premeditated genocide has reached over 56 million deaths of innocent babies – all in the name of the Ninth Amendment, which the constitutional framers originally intended to secure not death, but life, liberty and the pursuit of happiness.