March 27, 2013
"The criminal is to go free because the constable has blundered." 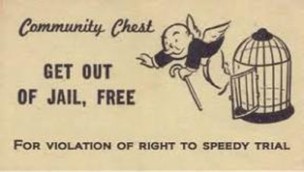 In their notes on the Sixth Amendment, O'Connor and Sabato's textbook, "American Government: Roots and Reform," wrote that it was "the centerpiece of the constitutional guarantees afforded to individuals facing criminal prosecution ... [and] sets out eight specific rights, more than any other provision of the Bill of Rights." Here is the full text of the Sixth Amendment:

"In all criminal prosecutions, the accused shall enjoy the right to a speedy and public trial, by an impartial jury of the State and district wherein the crime shall have been committed, which district shall have been previously ascertained by law, and to be informed of the nature and cause of the accusation; to be confronted with the witnesses against him; to have compulsory process for obtaining witnesses in his favor, and to have the assistance of counsel for his defense."

As with every provision of the Bill of Rights, the central foundation of the Sixth Amendment was specifically designed to fight against the unjust legacy and repressive policies of colonial-era England against her American colonists. The first condition of the Sixth Amendment is that criminal defendants or individuals subject to criminal prosecution must be given "a speedy and public trial"; it then requires that all such trials take place in public, with the defendant informed of the cause and nature of the allegations against them. The leitmotiv fundamental to these sections of the Sixth Amendment, in addition to those requiring prosecution witnesses to testify in public, giving the defendant the opportunity to produce favorable witnesses on their behalf and securing the assistance of counsel, is that any citizen arrested or denied their liberty be allowed to have the case made against them in public. The infamous, clandestine Star Chambers of England were outlawed.

While the Fifth Amendment also mandated the government to produce evidence that did not rely on forced or coerced confessions and self-incrimination through torture, it necessitated that all such evidence must be obtained lawfully and with the knowledge of a judge or public magistrate. The Sixth Amendment establishes, in principle, the American criminal justice system as one that is open to the public and to the press as affirmed by the Supreme Court in the case of Richmond Newspapers v. Virginia (1980).

Yet in modern times this storied history of the Bill of Rights has been severely perverted by what I've called the enduring, perpetual Progressive Revolution, whereby the greater part of criminal prosecutions in the United States are at the state and local levels. Thus to this end, all of the criminal-defendant rights and protections contained within the Sixth Amendment did not originally extend to most Americans until the early 1960s when the Supreme Court began systematically incorporating the guarantees of the Bill of Rights to the states through the 14th Amendment with the radical Warren Court (1953-68) followed by the Burger Court (1969-85). The vast majority of Supreme Court cases regarding criminal-defendant rights come during these two leftist, activist and largely unconstitutional judicial eras which has contributed greatly to deconstructing America's Judeo-Christian traditions, Natural Law, culture and society while contributing greatly to America's existential constitutional crisis.

Possibly the best-known case from this era relating to the Sixth Amendment is Gideon v. Wainwright (1963), which held that all persons accused of a serious crime are entitled to an attorney, even if they cannot afford one, a rule that was soon extended to cover misdemeanors as well, at taxpayers' expense. Three years later, the Supreme Court combined the right-to-counsel rule established in Gideon with the Fifth Amendment prohibition against self-incrimination to create the principles animating Miranda v. Arizona (1966). Not since the creation of the Bill of Rights by the constitutional framers in 1791 had the Court ever interpreted the Fifth and Sixth Amendments to mean that individuals had rights to criminal due-process guarantees out of ignorance of the law or indigent economic status. Decisions such as Gideon and Miranda by leftist jurists systematically deconstructed and perverted the U.S. Constitution to create multitudes of new defendant "rights" out of whole cloth.

For over 100 years, progressives have favored leftist activist judges who disregard constitutional mandates in favor of a Darwinian, atheistic, evolving "living Constitution." The first progressive head of state was Republican President Theodore Roosevelt (1901-09) who promptly nominated Oliver Wendell Holmes (1902-32) to the Supreme Court. Holmes is the greatest patron saint of the liberal/progressive left. With the election of Barack Obama in 2008, America has come full circle by willfully perpetuating this homegrown treason, this radical Progressive Revolution whose central goal is what Obama said in a 2007 speech, "to fundamentally transform America." By "transform," Obama and every progressive intends to deconstruct and destroy all of America's Judeo-Christian traditions.

In a 2001 radio interview, Obama gave America a glimpse into the perverse mind of The Regime and what type of characteristics he considers in an ideal judge. Obama said, "... The Supreme Court never ventured into the issues of redistribution of wealth, and of more basic issues such as political and economic justice in society. To that extent, as radical as I think people try to characterize the Warren Court, it wasn't that radical. It didn't break free from the essential constraints that were placed by the Founding Fathers in the Constitution. ..."

The most effective tactics liberal/progressives have used repeatedly to break free from the "essential constraints" of the Constitution was to enact the treason of the Progressive Revolution throughout every aspect of society via liberal activist judges and their anti-constitutional decisions. By appointing Sonia Sotomayor (2009) and Elena Kagan (2010) to the high court, Obama has openly shown his utter contempt for the U.S. Constitution, preferring evolutionary activist judges who legislate from the bench and share his tyrannous belief that the Warren Court (1953-69) didn't go "far enough" in enshrining "redistributive change" (e.g., integrating Marxist/Alinsky socialist ideas in place of the rule of law into every area of society), thus effectively rendering the Constitution a dead letter.

Applying to the so-called "Incorporation Doctrine" whereby liberal activist judges apply many provisions of the Bill of Rights (including the Sixth Amendment) to the States through the 14th Amendment due-process clause is one of the most enduring yet ignored constitutional con jobs in the history of American jurisprudence – a move which for 50 years has literally given untold multitudes of criminals a key to their own jail cells ... at taxpayers expense.