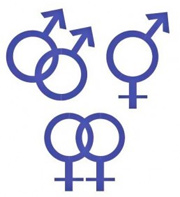 JUSTICE SCALIA: I'm curious, when did it become unconstitutional to exclude homosexual couples from marriage? 1791? 1868, when the 14th Amendment was adopted? Sometimes after Baker, where we said it didn't even raise a substantial Federal question? When did the law become this?

JUSTICE SCALIA: It's an easy question, I think, for that one. At the time that the Equal Protection Clause was adopted. That's absolutely true. But don't give me a question to my question. When do you think it became unconstitutional? Has it always been unconstitutional? ...

MR. OLSON: It was constitutional when we as a culture determined that sexual orientation is a characteristic of individuals that they cannot control, and that that –

MR. OLSON: There's no specific date in time. This is an evolutionary cycle.

Olson wasn't inclined to give a specific date or window of dates in response to Justice Scalia's question. But Volokh Conspiracy readers have: Results of the VC reader poll from 2010 on when same-sex marriage became unconstitutional (at least among those who think it is currently unconstitutional) is available here.

This is how I would counter Olson's arguments:
What liberals, socialists and progressives understand all too well and conservatives, libertarians, observant Jews and Christians don't seem to care that much about anymore is once you separate legality from morality (God) you put society on an irrevocable slide into the abyss.

Robert A. Levy, chairman of the libertarian Cato Institute, wrote an interesting essay on same-sex marriage in 2010. Here is an excerpt:

Of course, government discriminates among its citizens all the time. By the 1920s, 38 states prohibited whites from marrying blacks and certain Asians. Until 1954, all states were allowed to operate segregated schools. Thankfully, the Supreme Court invalidated both interracial marital restrictions and school segregation. The court applied the plain text of the Equal Protection Clause despite contrary practices by the states for many years even after the 14th Amendment was ratified in 1868.

To pass constitutional muster, racial discrimination had to survive "strict scrutiny" by the courts. Government had to demonstrate a compelling need for its regulations, show they would be effective and narrowly craft the rules so they didn't sweep more broadly than necessary. That same regime should apply when government discriminates based on gender preference.


Here, Levy is absolutely wrong! Anyone – conservative, leftist, atheist, pagan or statesman – who conflates racial discrimination in marriage, education, or employment with gender or sex is ignorant of both history and constitutional law. The Constitution, the Bill of Rights, the Abolitionist movement, the Civil War, the Civil War Amendments, Reconstruction, nor Jim Crow, the 1964 Civil Rights Acts or affirmative action had anything to do with the Lesbian, Gay, Bisexual, Transgender movement.

Being black isn't a sin; being LGBT is a sin and violates many Bible precepts and the original intent of the framers. Perhaps Fox News host Bill O'Reilly would call me a "Bible thumper," which I consider a vile, reactionary stereotype, yet O'Reilly must learn that all discrimination isn't invidious or unlawful. Some discrimination is required to keep society from imploding.

Black Americans are collectively the beneficiaries of the blood, suffering and death MLK and the civil rights movement bore to fulfill Jefferson's Declaration, yet over the past 40 years Black America has squandered this sacred inheritance because we allowed LGBT activists and other disparate groups to pervert the Bill of Rights and the 14th Amendment due process clause by glomming onto the black civil rights moral crusades of the 1950s and '60s, which historically were rooted in God, biblical theism, Natural Law and constitutional liberty. This treachery is especially outrageous on the 45th anniversary of Dr. King's assassination.

Is there a legitimate Fifth Amendment "right" to same-sex marriage? No. If America continues to allow an oligarchy of leftist, renegade judges using a Darwinian, atheist, evolutionary, "living constitution" paradigm to pervert the Constitution against itself, then the Constitution has become meaningless to uphold biblical principles and protect liberty, yet perfectly germane to social deconstruction and voluntary slavery.