America 2013 stands at the precipice of human history. Will Americans follow the progressive road to social, economic and moral perdition like their cousins in Europe have been doing since 1900, and increasingly since post-World War II, by embracing a seductive, gradual form of Marxism called "Fabian Socialism"? A "moral decay" is how Gibbon describes the fall of the longest-existing empire known to humanity. As it was with ancient Rome, so shall it be with America? 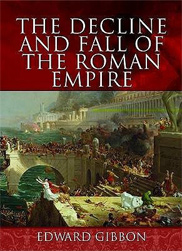 The fall of Rome has been a favorite topic of historians, especially since the publication between 1776 and 1788 of Edward Gibbon's "The Decline and Fall of the Roman Empire" (six volumes). In his fourth volume, Gibbon lays out his thesis:

"... [T]he decline of Rome was the natural and inevitable effect of immoderate greatness. Prosperity ripened the principle of decay; the causes of destruction multiplied with the natural extent of conquest; and, as soon as time or accident had removed the artificial supports, the stupendous fabric yielded to the pressure of its own weight. The story of its ruin is simple and obvious; and, instead of inquiring why the Roman Empire was destroyed, we should rather be surprised that it had subsisted so long."

In 1776, the year America boldly declared her independence from the tyranny of England under King George III, Gibbon had just penned his first volume of this magnum opus. In 1788, the final volume of his epic on the Roman Empire was completed. Just three years later America's constitutional framers would ratify the Bill of Rights in 1791, including its transcendent First Amendment: Congress shall make no law respecting an establishment of religion, or prohibiting the free exercise thereof; or abridging the freedom of speech, or of the press; or the right of the people peaceably to assemble, and to petition the Government for a redress of grievances.

Note that the framers of the Bill of Rights, or the first 10 amendments to the Constitution, considered them to be Natural Law – in other words, unalienable, God-given, enumerated rights held by all people and thus natural rights that could never be lawfully taken away by any tribunal or man's law (e.g., Positive Law).

In a 2005 law review article, I quoted Franklin, one of the most important contributors to the Constitution, to demonstrate how the framers diligently looked at the history of all known human governments, including Gibbon's contemporary, comprehensive six-volume history, before they unanimously chose Natural Law, the integration of law and morality based on the Judeo-Christian traditions as the political philosophy and foundation of American law, jurisprudence and political leadership. In that article I wrote:


Hence, when the framers of the Constitution looked for a philosophy upon which to base this document, Benjamin Franklin summarized their sentiments quite aptly: "We have gone back to ancient history for models of Government, and examined the different forms of those Republics which having been formed. And we have viewed Modern States all around Europe."


For most Americans, the First Amendment stands as the foundation of the Bill of Rights: limits on government Leviathan power to prohibit or compel religious beliefs, the right to have political opinions and freely express them, defense for a free press, the right to assemble peaceably and the right to petition the government, through protest or the ballot, for a redress of political grievances.

In addition, it is essential to realize that the First Amendment, like virtually all of the Bill of Rights, was not applicable to state governments until 1925 and to apply their substantive guarantees through the 14th Amendment, a process that did not begin until Fabian socialism and progressive radicalism crept into the Supreme Court beginning with Gitlow v. New York (1925) (ruling that the 14th Amendment extended the reach of certain limitations on federal government authority set forth in the First Amendment – specifically the provisions protecting freedom of speech and freedom of the press – to the governments of the individual states).

This pattern of leftist judicial activism from the bench would increase exponentially during the FDR/Truman eras (1933-53) as FDR's bought-and-paid-for "New Deal" Supreme Court began out of whole cloth to create and propagate the so-called "incorporation doctrine" in many of its judicial decrees, starting with the infamous Footnote 4 of Carolene Products v. U.S. (1938) and going viral in Korematsu v. U.S. (1944) (holding that Japanese, Italians and Germans be placed in internment camps based on FDR's Order 9066 during World War II).

Apply Gibbon's warnings against the decadence of ancient Rome to modern America: "... the decline of Rome was the natural and inevitable effect of immoderate greatness. Prosperity ripened the principle of decay; the causes of destruction multiplied with the natural extent of conquest; and, as soon as time or accident had removed the artificial supports, the stupendous fabric yielded to the pressure of its own weight."

This logically applies to the First Amendment by considering, for example, that until Gitlow, progressives hated the fact that Southern states before the Civil War outlawed pro-abortion literature; many states levied and collect taxes on behalf of state-sponsored churches and religious education; newspapers frequently were prohibited from publishing stories criticizing industry or certain connected political leaders because such speech was deemed seditious and consequently subject to prior restraint; and public protests regarding unpopular people or issues were repeatedly proscribed by state breach of peace laws.

Enter Pandora's box – 40 years after Gitlow, in the 1960s, the Supreme Court began pushing its Darwinian, atheistic, progressive, anti-constitutional agenda and unleashed a nine-man sexual revolution using the incorporation doctrine to pervert the sexual mores of American society first in Griswold v. Connecticut (1965), which was based in part on the right of married couples to make decisions about contraception. Next was Roe v. Wade (1973) (legalized genocide of the pre-born), Lawrence v. Texas (2005) (legalized sodomy) and Hollingsworth v. Perry (2013) (Court will rule in June on whether same-sex marriage is lawful in all 50 states under Equal Protection grounds).

Paraphrasing Gibbon: The story of its ruin is simple and obvious; and, instead of inquiring why the Roman Empire was destroyed, or why America committed self-genocide, we should rather be surprised that it had subsisted so long.