Ellis Washington
Hegel's Dialectic in the Age of Obama 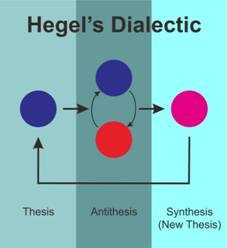 My writing inspiration comes from two primary sources – God and Life. God, through the Holy Spirit, gives me the prompting to go in this direction or that direction ... then I go. My other source of inspiration comes from just living life. For example, in early June on my radio show, "Joshua's Trial," a caller asked me pointedly, "Professor Washington, what do you think about Hegel's theories? You need to write an article on Hegelian dialectic." I told the caller that I had of late been thinking about Hegel's dialectical philosophy and had just commented about Hegel's dialectic on the Facebook page of the school at which I teach – National Paralegal College (NPC).

On June 3 my boss, professor Stephen Haas, education director of NPC, posted this interesting news article, "Supreme Court OK's DNA swab of people under arrest," followed by his usual insightful commentary. Here is a portion of that dialogue: "Big criminal procedure handed down by SCOTUS today. The policy may (consistent with the Fourth Amendment) take a DNA sample (swab inside the cheek) based on an arrest (which itself has to be based on probable cause, of course). Interestingly, this was not a 'party lines' decision. Rather, Breyer was in the 5-4 majority while Scalia dissented."

A narrowly divided Supreme Court in the Maryland v. King case ruled that police can collect DNA from people arrested but not yet convicted of serious crimes, a means that more than half the states already use to crack unsolved crimes. This critical opinion by the Supreme Court is of ultimate concern for millions of Americans. Why? It redefines or perhaps even deconstructs the protective barriers of the Fourth Amendment right of privacy, leaving all Americans vulnerable to government surveillance and abuse through its many leviathan tentacles like: IRS, EPA, Homeland Security, State Department and Justice Department.

The court held it was constitutional to take a DNA swab of people under arrest. Professor Hass further wrote on our NPC Facebook page: "I'm not sure I see a big difference between DNA sampling and fingerprinting. DNA sampling is one quick swab inside the cheek. Fingerprinting requires 10 squeezes of the fingers and leaves your hands a smudgy mess. Seems to me that the latter is more invasive." This prompted professor Eric Martinez to write, "I think this is an issue the strict constructionists face all the time – modern technology. As the article suggests, the framers could never have envisioned the technology we have today."

After I read this seemingly benign statement by professor Martinez, I immediately thought about the Hegelian dialectic and wrote this reply:

Eric, I disagree. Your comment is a popular but false belief that subtly presents a choice between two incongruous alternatives, or postulates a Hegelian dialectic. Thesis: The framers wrote the U.S. Constitution in the late 18th century. Antithesis: The framers could never have envisioned the technology we have today. Synthesis: The Constitution is a dead-letter document no longer relevant to contemporary society, which has evolved to the point that only a "living constitution" can govern such a sophisticated, dynamic and complex culture in modern times.

I further wrote that Hegelian dialectic (or Hegelian logic) sounds good, but ultimately it is sophistic, anti-logical and genocidal. Hegelian dialectic is specious propaganda for leftists who portend to be smart, cosmopolitan and "modern." Applying Hegelian dialectic in modern political discourse has caused societal devolution – Congress routinely creates laws antagonistic to legitimate constitutional principles; our presidents dictate executive orders to enforce laws in violation of natural rights; our judges frequently exhibit a jurisprudence pathology akin to Nietzsche's Will to Power to create law out of whole cloth from the bench, laws that are diametrically to God's law and Veritas (truth).

Why are the foundations of the American republic literally crumbling beneath our feet like Pompey? Because there are numerous dark, sinister forces operating throughout all of America's institutions that, since the Age of Enlightenment (1600-1800), have actively undermined our sacred constitutional heritage. In its place the Democratic Socialist Party has enacted an existential evolution atheism, a socialist/progressive worldview that deifies Darwin above natural law and ignores the original intent of the framers. These arrogant, anti-constitutional views are unfortunately held by perhaps over 98 percent of today's academics who hold views on jurisprudence, legal history and political philosophy. Their dystopian motto is crafted from the words of their Progressive champion, Justice Oliver Wendell Holmes, who wrote that, A new untruth [evolution atheism] is better than an old truth [natural law].

The Obama scandals America is daily plagued with are far beyond the movie fantasies of Hollywood, or the black helicopter paranoia of the conspiracists. President Obama's naked usurpation of power is in furtherance of the existential Progressive Revolution, which range from the Fast and Furious gunrunning scandal in Texas to the Benghazi murder of four, including an American ambassador, to the IRS routinely blacklisting pro-life, conservative, tea party, Jewish, Christian and patriotic groups, to the Department of Justice targeting Fox News and AP journalists for surveillance, from the revelation that the NSA is tracking the telephone calls of most Americans, to the galling spectacle of traitor Bradley Manning's WikiLeaks trial.

In conclusion, the Hegelian dialectic is fully operational in the Age of Obama as established in the Progressive Revolution – Thesis: In 1776, We the People through a social contract accorded some of our natural rights given to us by God to government representatives to govern society for the common good of all. Antithesis: Over time, anti-constitutionalists – aka loyalists, humanists, Marxists, socialists, communists, liberals, progressives, Democrats, RINO Republicans – have taken over America via the Darwin-Marx-Gramsci "Long March through the Institutions," whereby originalism is destroyed and virtually all of our natural rights have been deconstructed. Synthesis: Americans are all Democratic Socialists now inside the church of evolution atheism.