August 5, 2013
"When a president pursues policies that require such expansive federal power that he can't get a single justice to agree, something is probably amiss." 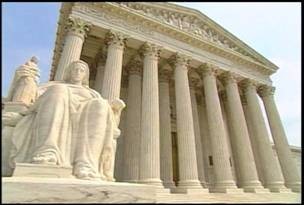 In an interesting USA Today op-ed by George Mason University law professor Llya Somin explores the galling paradox Obama messiah must face when the White House loses high-court cases 9-0 time after time. Professor Somin thinks that the president "is going too far" in pushing what I call his Marxist/Alinsky agenda to systematically deconstruct American law and society. A literary analogy would be Don Quixote tilting at windmills. A historical analogy is Hitler (a National Socialist) burning down the Reichstag and blaming it on his fellow fascists, the communists, and on his scapegoat, the Jews.

People who follow Supreme Court decisions devote most of their time arguing the combative issues that divide justices 5-4 along predictable ideological lines – left vs. right, socialist vs. conservative, Democrat vs. Republican – when in reality the true division is anti-constitutionalist vs. constitutionalist. For example, no rational jurists with any knowledge of American constitutional law, Western civilization and history could justify same-sex marriage on constitutional grounds without first embracing a deconstructive, nihilist, evolution-atheist worldview in place of America's Judeo-Christian traditions.

No problem. Obama doesn't care one whit about the Constitution and the separation of powers doctrine that gives him only limited enumerated powers under Article II, Section 1, so when Congress or the Supreme Court unanimously votes against his almighty executive decrees, it's like the German Parliament voting against Hitler's egomaniacal power grab to combine the chancellorship with the presidency thus making him the almighty Fuhrer. The burning of the Reichstag ironically occurred on this day, Aug. 2, 1934, exactly 79 years ago when Hitler use this infamous pretext to seize dictatorial powers onto himself. Like imperial presidents and even tyrants of the past, President Obama refuses to obey any constitutional limits on his power.

For example, in Horne v. Department of Agriculture, a decision delivered in June, the justices unanimously overruled the Obama administration's argument that raisin farmers did not have the right to go to court to argue against the seizure of hundreds of thousands of dollars' worth of raisins. The Fifth Amendment states that the government must pay "just compensation" whenever the government takes private property for "public use." However, the administration demanded that farmers could not even raise the takings issue in court without first enduring extended delays and paying a $483,000 fine. Horne was the administration's third unanimous defeat in a property-rights case in 18 months. In Sackett v. Environmental Protection Agency, the administration insisted that a couple had no right to go to court to seek compensation after the EPA blocked construction of their "dream house." Even liberal justices usually skeptical of property-rights claims, including one of President Obama's appointees, could not support Obama's anti-property-rights arguments.

Obama isn't a transcendent, unique, or historical figure, nor is he the first president to endorse liberal fascist policies to amass more federal power to himself. In 2008, then-candidate Obama and most of his supporters quite reasonably criticized the Bush administration for exceeding constitutional limits on its authority where the Supreme Court rejected its claims of nearly unlimited authority to detain U.S. citizens determined to be "enemy combatants" in America's "war on terror." Bush and Obama come from a long line of imperial progressive presidents dating back to Lincoln, TR, Wilson, FDR, LBJ and others who, through radical progressive policies, have imposed a de facto coup; a political culture where presidents habitually violate the limits of federal executive power with little respect for constitutional restrictions. Acting like tyrannical despots, U.S. presidents frequently treat their executive decrees as if their role is not to defend constitutional liberties, but rather to pervert rule of law to such an extent eventually the courts are forced to intervene and say No!

Liberal fascism is demonstrative of America's existential, tragic slide into tyranny where arrogant presidents bristle at any notions of constitutional constraints on their power. Jefferson accurately called such constraints "chains" to "bind them [politicians, presidents, judges] down from mischief by the chains of the constitution." The constitutional chains would of necessity overrule leftist policy decrees, for example from the EPA's over-regulating land use, to IRS blacklisting of conservative, Christian, Jewish and tea-party groups, to NSA privacy violations of Americans in their so-called war on terror.

We the People must put an end to unchecked executive power, exercised even by Lincoln (arguably America's greatest president) with his suspension of habeas corpus, summarily jailing his political enemies including journalists and enacting the first federal income tax to fund the Civil War. Yes, as a black man, I am eternally grateful that the Civil War was fought in part to put black people on the road to full equality as originally conceived in Jefferson's Declaration of Independence, that "all men are created equal. ..." Yet Lincoln executed too many unconstitutional acts using them as pretext to enact even more unconstitutional policies and thus paving the way to the Age of the Imperial Progressive Presidency 35 years later beginning with Theodore Roosevelt (1901-09) and continuing to Barack Obama (2009 -present).

As Congress remains in gridlock five years into his presidency, Obama has repeatedly warned, "If Congress doesn't act, then I will." All presidents including Obama must be shackled to the chains of the Constitution and not be allowed to ignore the high court when it rules 9-0 against his Marxist policies, which egregiously violates American's economic, property and religious rights. These rights were purchased by war, famine, extreme loss and with the blood of our forefathers, and thus these natural rights are sacred, inviolable and unalienable.