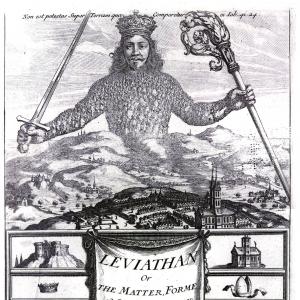 The idea that people can live under government and be free is, as he [Hobbes] points out, ridiculous. To talk of a "free subject" is just as illogical "as if a man should talk to be of a round quadrangle."

Fascism was really the basis of the New Deal.

Thomas Hobbes (1588-1679) lived in exceedingly tumultuous times. Leviathan was written after the protracted Thirty Years' War (1618-48) and during the brutal English Civil War (1642-1651) a war, like the Civil War was to Justice Oliver Wendell Holmes, a traumatic event that completely changed his worldview from theism to atheism, and perverted his political thinking and writings making Hobbles value peace and constancy above God, truth and liberty. Leviathan argues for a "social contract" and rule by an absolute sovereign (as pictured on the original frontispiece above). Hobbes, being the de facto secretary to Sir Francis Bacon followed Bacon's utopian ideas outlined in his New Atlantis (1627) and aimed at scientific knowledge endeavoring to apply the scientific method to the study and science of government. If properly worked out, he believed, politics could be just as scientific as mathematics: ''The skill of making and maintaining commonwealths consisteth in certain rules, as doth arithmetic and geometry."

In his magnum opus Leviathan (1651) Hobbes begins from first principles. All men are selfish. Selfishness is man's base nature according to Hobbes and controls everything he does even if on the surface seems selfless, humorous or altruistic, nevertheless his motives are selfish, namely "to gain the reputation of charity of magnanimity, or to deliver his mind from the pain of compassion." Hobbes writes: "Joy, arising from imagination of a man's own power and ability, is that exultation of the mind which is called glorying . . . Sudden glory is the passion which maketh those grimaces called laughter, and is caused either by some sudden act of their own that pleaseth them, or by the apprehension of some deformed thing in another, by comparison whereof they suddenly applaud."

Mankind's selfish nature, Hobbes argues, is that if there were no law and no government, men would be eternally in a state of war or as Hobbes famously wrote in De Cive and Leviathan – Bellum omnium contra omnes, a Latin phrase meaning "the war of all against all" or each against all.

Hobbes further writes: "It is manifest that during the time men live without a common power to keep them all in awe, they are in that condition which is called war; and such a war as is of every man against every man . . . In such condition, there is no place for industry, because the fruit thereof is uncertain; and consequently no culture of the earth, no navigation, no use of the commodities that may be imported by sea, no commodious building, no instruments of moving and removing such things as require much force, no knowledge of the face of the earth no account of time, no arts, no letters, no society, and that which is worst of all, continual fear and danger of violent death, and the life of man solitary, poor, nasty, brutish and short."

Hobbes' Leviathan therefore establishes that it is both natural for man to live in a primitive, lawless state as it is natural for him not to. Hobbes seems to admit that laws and government are not natural to humanity, because primitive man in his state of existential war were without them. To maintain peace and security then humanity must create a social contract and collectively agree to be bound to a government, a commonwealth ruled by an absolute sovereign which is a scientific consequence of human nature.

If men endeavor to govern themselves without a central government, the consequence is perpetual war, and a life "nasty, brutish and short." However, Hobbes' version natural law is a perversion and quite the opposite of Locke, Jefferson and the American framers view of natural law (e.g., the integration of law and morality). It follows that to give up one's individual right of self-defense to the government is to obey natural law – that "Law of Nature," as Hobbes puts it, "by which we are obliged to transfer to another, such rights as, being retained, hinder the peace of mankind." Likewise, to act in ways that destroy the peace of the commonwealth, by proudly demanding privileges [e.g., unalienable rights], or repudiating justice to others, is unscientific, as well as immoral. It revokes natural law just as much, say, as trying to walk on the ceiling.

On the surface Hobbes's reasoning appears benign – even if it seems bizarre to us to deliberate about "laws of nature" which come from God that can be disobeyed. Yet, his scientific theory begins to reveal its diabolical nature when the question of rebellion, or dissent against the government arises. The notion that people can be ruled by governments of men and be free is quit impossible under a Hobbesian paradigm. To talk of a "free subject" is just as illogical "as if a man should talk to be of a round quadrangle . . . I should not say he were in error, but that his words were without meaning, that is to say, absurd." Likewise, the belief that we are capable of freely determining what is right or wrong, or that we have some metaphysical moral duty to God to obey our consciences, is equally repugnant to Hobbesian philosophy.

For example, it can be logically argued that last Tuesday's election results where the Democrat Socialist Party (Terry McAuliffe) won the Virginia governor's race over conservative Ken Cuccinelli and Obama winning two national elections over the conservative Judeo-Christian values of the GOP in effect is the triumph of Hobbesian totalitarianism (fascism) advocated in his Leviathan. As with all socialist states (e.g., Lenin/Stalin International Socialism, Mussolini's State Socialism, Hitler's National Socialism and American/European Democrat Socialism) one authority alone is permissible within the Hobbesian state. What Nietzsche called the "slave morality" of Christianity or as Hobbes called a second, "spiritual" authority (e.g., the Christian church) cannot be legalized to effect public policy which is why the Left always worships the idea of separation of church and state.

While Hobbes makes respectful references to God throughout his treatise, he frequently ridicules the idea of a spiritual dominion, beyond the reach of the state and the law. To believe in this, he insists, is like believing in "a Kingdom of Fairies, in the dark." For the church to pretend it has contact to such a "higher" realm, and can consequently arguably defeat the dictates of the all-powerful State, is to "set up a supremacy against the sovereignty." Doesn't these ideas sound just like today's socialists, progressives and postmodernists who war incessantly against America's original Judeo-Christian traditions?

Paul Hutchinson in his 1945 book, "The New Leviathan," had this warning against liberal fascism for our Age as the Allied Powers defeated the Axis Powers at the end of World War II: "The essence of this totalitarian threat, as it presents itself in the Western democracies, lies in the increasing tendency to look to the state for the ordering of all life and every life. In thus turning to the state, man is of course seeking security. But the cost is slavery."

Likewise, for Hobbes the State alone has the sovereign right to proclaim what is right and wrong. "Sin is nothing but the transgression of the law [State]." Good simply means getting whatever you want, and Evil is anything that might stand in your way of getting it. Therefore, private morality is an illusion which all dictators from Hobbes's Leviathan to the radical atheism found in Voltaire, Rousseau, Robespierre, the Jacobins, and the French Revolution, through the nineteenth century Age of Evolution, atheism, progressivism, socialism, secular humanism of Charles Darwin, Karl Marx, Freidrich Nietzsche, William James, to the apotheosis of twentieth century tyrants who aggressively and proudly championed liberal fascism or what I call The Progressive Revolution – especially in the socialist policies of Presidents Woodrow Wilson, FDR, LBJ and Barack Obama.

All of these ideas, people and the revolutions and wars they ignited in some measure owe a debt of gratitude to Thomas Hobbes and to the reactionary ideas contained in his malevolent treatise Leviathan, which above all deified our carnal desires, wants, needs, privileges and transfigured them into the lofty, secular humanist language of the "Rights of Man"... which upon closer inspection always devolves into servile slavery to the God-State.

Obamacare is just the latest policy manifestation of socialist slavery.