November 17, 2013
Switzerland stands accused not only of disgracefully abandoning its policy of neutrality but also of clandestinely helping the Nazis during World War II...: thirty thousand Jewish refugees were turned back at the Swiss borders for certain death, and while 28,000 were admitted, the Swiss Jewish community was taxed for their upkeep. 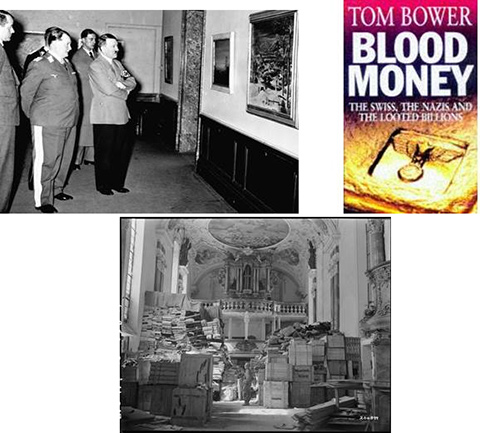 Two phony words the political Left (including the U.S. Supreme Court) has used to great political advantage over the centuries are "secular" and "neutral." These two words in my opinion only exist to obfuscate, to deconstruct and to pervert the truth. For example for 160 years the U.S. Supreme Court has shamefully perverted the Constitution using secular and neutral jurisprudence to promote and defend policies championed by the modern Democrat Socialist Party including unconstitutional even fascist doctrines like –
Judicial Positive Law, secular humanism and phony neutrality by activist judges in large part gave legal legitimacy to such unconstitutional policies as – FDR's New Deal, Court Packing Plan of 1937, and the Welfare State, LBJ's Great Society, abortion, same-sex marriage, amnesty for illegal aliens, Obamacare, etc. In other words if the public wasn't so collectively mis-educated through the public school system (NEA founded in 1857) all of these unconstitutional policies made legal primarily through rogue, activist judges promoted by the Democrat Socialist Party would cease to exist just like the moribund Whig Party of the 1830s-50s fell into the dustbin of history and was replaced by the moral authority of the Republican Party (1854) with its twin mandate – ending slavery (making blacks equal to whites) and destroying polygamy (making women equal to men).

President Ronald Reagan said it best, "Fascism was really the basis of the New Deal," therefore it follows then that the political fascist policies cited above could not exist without its philosophical foundation rooted in the false twin doctrines of secular humanism and judicial neutrality.

The Myth of the Secular

Let's take the first word secular (from Latin saecularis meaning "worldly" or "temporal") is the state of being separate from religion, or not being exclusively allied or against any particular religion. Secularism is the contention that religious issues should not be the source of politics and that religion should have no relevance in public life and certainly should not guide or affect public policy, law, economics, culture, or society. Since the advent of secular humanism in the 1850s and the decline of America's Judeo-Christian influence in society the political Left including secular humanists, atheists and progressives continued unmolested to deconstruct our First Amendment religious rights while changing America within from a nation founded on bedrock Judeo-Christian principles to our present collective dementia as a nation mired in evolution atheism and secular humanism. The great Christian apologist Francis Schaeffer wrote of this secular paradigm shift, "I believe that pluralistic secularism, in the long run, is a more deadly poison than straightforward persecution."

The Left has deified the secular as the new anti-religion religion; a direct outgrowth of the anti-Christian, anti-church, anti-cleric genocide perpetrated by the Jacobins and Robespierre in the French Revolution (1799-89). Since the advent of secular humanism and evolution atheism which I call The Progressive Revolution beginning in the 1850s and 60s the progressive Left like the Trojan horse of antiquity has hijacked, propagandize and deconstructed societal morality (religion) and has primarily though our so-called public schools and liberal arts higher-education deconstructed our Judeo-Christian worldview over time with gradualist tactics like Fabian Socialism and the "Long-March through the Institutions." This is why the majority of American citizens have slavishly embraced such diabolical books and ideas as – Marx's "Communist Manifesto" (1848), Charles Darwin's "Origin of Species" (1859) and Friedrich Nietzsche's "God is dead" philosophy in "Gay Science" (1882) and Christianity as slave morality in his "Thus Spake Zarathustra" (1883-85) and "Genealogy of Morals" (1887), etc. These perverted ideas found throughout many other atheistic writers and progressive works have collectively beguiled America, Europe and essentially the entire world to such a global extent that in the twenty first century an evolution atheist worldview rooted in secular humanism is virtually universally accepted as beyond rational argument.

How else could American society have so collectively embraced Darwin's evolution pseudo-science as revealed in the racist subtitle of his polemic "Origin of Species by Means of Natural Selection or the Preservation of Favoured Races in the Struggle for Life," or Darwin's nephew Francis Galton's eugenics ideas rooted in racialist demagoguery embraced by virtually all the progressive and atheistic thinkers of the late nineteenth and early twentieth centuries. To this day eugenics and Social Darwinism is championed by Planned Parenthood and the Democrat Socialist Party to promote abortion – almost 60 million blood money causalities paid to the feminists over the past 40 years, or since the U.S. Supreme Court's racist, unconstitutional decision, Roe v. Wade (1973) was handed down. This radical secularism legitimized in law is beyond the historical grotesqueries of Hitler, the Nazis and the Holocaust!

The entire diabolical agenda of the modern Democrat Socialist Party could only have been implemented in Supreme Court case law and in public policy by perverting, secularizing and deconstructing the moral authority of the Bible and the churches historical influence in American society over time. Since the 1860s American society willingly embraced Karl Marx socialism, Social Darwinism, Nietzsche's aristocracy paradigm and God is dead movements and later Freud's neurotic sexual paradigms relating every human act, thought or desire to repressed sexual urges or to the Oedipus Complex. Because of the education monopoly of the Academy led by John Dewey and the respected place "secular" academics hold in society, Americans largely accepted these secular humanist ideas to the same extent as the German citizens of the 1930s and 40s accepted Nazi propaganda touting Aryan supremacy and Jewish inferiority thus becoming willing collaborators with Hitler, the Nazis as demonstrated in the annual Nuremberg rallies where millions of otherwise rational, educated, cosmopolitan German citizenry willingly embraced Hitler and the Nazis in orgasmic passion only to latter lie and contend after Germany lost World War II that they were collectively duped.

Regarding the so-called neutrality, a "permanently neutral power" as defined in Sections 5 and 13 of the Hague Convention of 1907 is a sovereign state which is subject by international treaty to be neutral towards the belligerents of all future wars. Switzerland is the most conspicuous example of a permanently neutral power in modern times. The conception of neutrality in war is narrowly defined and puts detailed constraints on the neutral nation in return for the internationally recognized right to remain neutral. However, a former New Jersey appeals court judge contends the notion that a judge is neutral is a legal fiction because no ruling on an issue of law is value-free. I agree and never bought into the conventional legal consensus that a judge can be neutral (unbiased). If a judge is worth his salt he must be biased – biased to God, to the Bible, the U.S. Constitution, to original intent and to Veritas (truth).

In recent history it is the duplicity and treachery of the Swiss particularly their "neutral" stance during World War II and their secretive and lucrative collaboration with the Nazis against the Jews and the Allied Powers that is most galling to all people of good faith. We now know through recently released documents unearthed in archives in Switzerland, Germany, the old Soviet Union and other countries throughout Europe that the so-called "neutral" Swiss were anything but neutral and worked hand-in-glove with the Nazis to help Hitler and Switzerland finance and profit from World War II, the Holocaust against the Jews which directly contributed to tens of millions of lost lives paid for by Jewish blood, Nazi and Swiss gold. Tom Bower's Blood Money: The Swiss, the Nazis and the Looted Billions, is an informative book on this notorious chapter of history.

The Swiss have profited to this day in the hundreds of billions in francs from what the Germans called blutgeld (blood money) stolen money and goods from the Jews by the Nazis including gold pulled from the teeth of Jews at extermination camps, melted down by the Nazis and secretly shipped to banks throughout Switzerland to help finance the war including the purchase of Swiss-made weaponry; hidden by their vile secrecy banking laws which have for centuries allowed this duplicitous nation to function unmolested, unjudged outside of national and international business, economic and moral norms; allowing the world's tyrants to hide their ill-gotten gain in protected Swiss bank accounts to this day.

The latest atrocity against the Jews were hundreds of recently recovered paintings Joseph Goebbels (Hitler's Minister of Propaganda) sold in the 1930s and 40s to Hildebrand Gurlitt, a Swiss art dealer for only 4,000 francs. Paintings stolen from the Jews now worth tens of millions today essentially blood money against the Jews – ill-gotten gain that belongs to the Jewish people and to their heirs yet the German government hid this important information for over a year after they confiscated the paintings from the apartment of Cornelius Gurlitt (the art dealer son), until the German government could no longer hide their shameful conspiracy to obstruct justice.

Dante could have been speaking to this duplicitous generation when he wrote, "The darkest places in hell are reserved for those who maintain their neutrality in times of moral crisis."