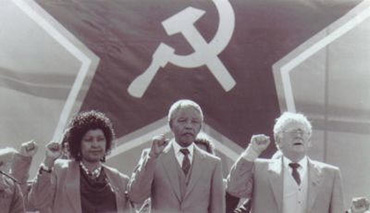 "The cause of communism is the greatest cause in the history of mankind!"

"At the end of the day... violence was the only weapon that would destroy apartheid."

The globalist, progressive propaganda campaign deifying South Africa's Marxist revolutionary and former president Nelson Mandela should be galling and disgusting to all people of good will who love truth, real history and hate lies. The Big Lie is that yes, Mandela experimented with communism in the 1940s early in his political career at the dawn of the black struggle against the racist White Afrikaners and that he and his organization, ANC (African National Congress) only turned to armed struggle in the early 1960s once he saw the futility of overturning capitalism while seeking to establish Black majority rule in South Africa. The myth continues that during his 27 years as a political prisoner at Robben Island Mandela learned to embrace "democracy" and thus overtime he totally renounced communism and political violence when he was let out of prison in February 1990. These popular sentiments are all lies and Marxist-sympathizing propaganda shamefully disseminated by socialists worldwide to this day.

Here's the truth about Mandela: On January 31, 1985 the State President of South Africa, P.W. Botha speaking in parliament, offered Mandela his freedom on one condition: that he "unconditionally reject violence as a political weapon." This offer of freedom was repeatedly made to Mandela during his 27 years in prison at Robben Island where all of his co-conspirators accepted a rejection political violence and were eventually set free. Mandela, the so called "man of peace" repeatedly rejected all offers of freedom. Why? Because unlike the phony, global adulation of this man Mandela and the ANC were not only brutal murderers of children and innocent civilians, but look at who attended his funeral celebration earlier this week – a veritable rogue's gallery of every tyrannical, communist, Islamic and Marxist dictator on the planet with the socialist Obama leading this pack wolves at Mandela's memorial service. Indeed, birds of a feather do flock together.

According to the original 1963 and 1964 indictments of the Rivonia Trial: The State v. Nelson Mandela et al, Supreme Court of South Africa, Transvaal Provincial Division, Mandela was not charged for being a political dissident but for four acts of TERRORISM. Specifically, he was himself originally incarcerated, for involvement in 23 different acts of sabotage, conspiracy to overthrow the government and treason. He and his fellow terrorist conspirators of the ANC and the South African Communist Party (SACP) were caught by the police while in the possession of 48,000 Soviet-made anti-personnel mines and 210,000 hand-grenades. Mandela lied when he confessed that the ANC only adopted violence as a means of protest "when other forms of resistance were no longer open to us."

Mandela was inspired by Fidel Castro's 26th of July Movement in the Cuban Revolution, in 1961 Mandela co-founded Umkhonto we Sizwe ("Spear of the Nation," abbreviated MK) with Sisulu and Joe Slovo, a notorious communist. Mandela became chairman of the militant group while embracing ideas from communist literature on guerilla warfare by Mao and Che Guevara. Soon after ANC leader Luthuli was awarded the Nobel Peace Prize, MK publicly announced its existence with 57 bombings on Dingane's Day (16 December) 1961, followed by further attacks on New Year's Eve.

Politically Mandela was a democrat socialist and a Marxist who was openly opposed to capitalism, private land-ownership and the power of big money. Influenced by Marxism during the revolution Mandela advocated scientific socialism, although he denied being a communist during the Treason Trial, yet historically it has been proven Mandela had been a communist since at least the 1950s. Despite his Marxist politics, Mandela nationalized nothing during his presidency (1994-99), fearing that this would scare away foreign investors. This decision was in part also influenced by the fall of the socialist states in the Soviet Union and Eastern Bloc during the early 1990s.

Mandela's second wife, Winnie Mandela (married, 1958-96) was a close confidant; an unindicted co-conspirator to ANC's human rights atrocities, who has been equally flattering in her praise of communism and violence. In 1986 she was reported in Moscow's communist party newspaper Pravda as saying: "The Soviet Union is the torch-bearer for all our hopes and aspirations. We have learned and are continuing to learn resilience and bravery from the Soviet people, who are an example to us in our struggle for freedom, a model of loyalty to internationalist duty. In Soviet Russia, genuine power of the people has been transformed from dreams into reality. The land of the Soviets is the genuine friend and ally of all peoples fighting against the dark forces of world reaction."

And again at Munsieville, on April 13, 1986, Winnie said: "With our boxes of matches and our necklaces we shall liberate this country." Referring here to her own specific brand of socialist, political terrorism whereby anyone who opposed her and Mandela's ANC would be bound hand and foot and then burned to death by means of a tire filled with gasoline being placed around the neck of their victims and set on fire. A truly gruesome and tortuous death.

Has Mandela since changed his tune in any way since being freed from prison in Feb. 11, 1990? Absolutely not. Leaving Victor Verster Prison on 11 February 1990, Mandela held Winnie's hand in front of amassed crowds and press; the event was broadcast live across the world. Driven to Cape Town's City Hall through crowds, he gave a speech declaring his commitment to peace and reconciliation with the white minority, but made it clear that the ANC's armed struggle was not over, and would continue as "a purely defensive action against the violence of apartheid."

Today it is hard for even the most fanatical Mandela apologist to ignore the increasingly definitive evidence of his key role in the international communist conspiracy which has been filtering out for decades. 30 years ago stalwart, conservative leaders like President Ronald Reagan, PM Margaret Thatcher and Pope John Paul II all spoke out against Mandela and his communist, terrorist tactics in fighting apartheid. Early on, for example, there was a hand-written document by Mandela, dubbed "How to Be a Good Communist," that was referenced during his Rivonia Trial prosecution for sabotage, subversion, and terror. "We communist party members are the most advanced revolutionaries in modern history," Mandela declared in the essay and further wrote that, "The people of South Africa, led by the South African Communist Party, will destroy capitalist society and build in its place socialism."

In Dec. 2013 The New American reported evidence exposed by British historian Stephen Ellis revealing Mandela's repeated denials of Communist Party participation as a fraud, while using communist disinformation tactics to downplay the consequences of those evil associations. Ellis's current research, based on ANC Party minutes and more, established not only that the ANC leader was a member of the South African Communist Party (SACP), but also that he was indeed a senior official working with the party's Central Committee throughout his 27 year prison term.

Despite numerous articles by The New American which has comprehensively documented over a period of decades, despite Mandela's communist and terrorist atrocities against innocent civilians, Western governments and power brokers, together with the world's most cold-blooded communist dictators, all worked together in creating Mandela the "Man of Peace" myth bringing him to power in May 1994. Yet, socialists cannot ignore the irrefutable truth exposed that Mandela was a socialist and Marxist even as South Africa continues its 20 year descent into perpetual chaos, genocide, and existential poverty, it is doubtful that regrets will be made – South African cities like Durban, Port Elizabeth, Cape Town and Johannesburg currently number as the murder, HIV/AIDS and child rape capitals of the world.

Although Democrat Socialists love Machiavellian tactics, yet Machiavelli was dead wrong – the end does not, and will never, justify the means, despite the excessive adulation and crocodile tears communists and Mandela apologists may express. Mandela is neither remarkable nor unique. He is a classical Soviet- trained, Soviet-backed Marxist leader and an admitted terrorist revolutionary in the mode of Cuba's Fidel Castro, Ghana's Kwame Nkrumah, Congo's Patrice Lumumba and Zimbabwe's Robert Mugabe, yet tragically Mandela's bombing campaigns against innocent civilians from the 1940-90s have faded from memory due to this existential Cult of Mandela.

Political science professor Dr. R.J. Rummel has written that in the 20th century alone communism (including Marxism, Leninism, Stalinism, Maoism, socialism) was responsible for the evil genocide (e.g., democide) of over 260 million people.

I for one will not join the world in this hypocritical, sycophantic mourning of the death of Mandela the Marxist. Instead shed a tear for some of Mandela's victims – who were principally South African Blacks accused of being against the communist coup of South Africa. Don't shed a tear for Mandela, but shed a tear for hundreds of millions of victims of communism all over the world. They have been virtually forgotten from history, but everyone who loves the truth, justice and righteous has a duty to promise that these victims are never forgotten, and that history does not repeat itself.